Mozyakin’s magic dominates the playoffs. Review of the season, Part 3

It was a season of shocks in the West, where three of the four first-round ties went to the lower-ranked team. Even the CSKA – Slovan series, which ended in a 4-0 sweep for the regular season champ, was closer than it seemed. CSKA didn’t drop a single game, but came fr om behind in the third period for three of those victories. 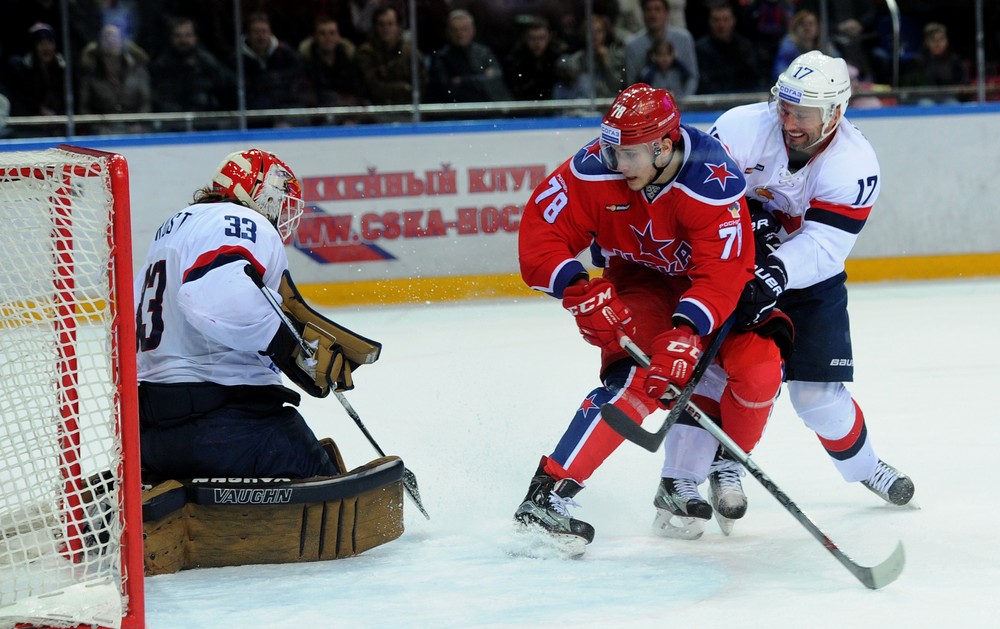 The biggest shock came in Finland, where Jokerit crashed out at the first hurdle against Torpedo in a bad-tempered series. The stage was set in Game 1, with Torpedo topping a wild game 6-4 in Helsinki while Jesse Joensuu got a last-minute misconduct penalty for a check to the head. The Finns tied the series in Game 2, while Torpedo racked up 57 PIMs, and things continued in that vein from thereon in. The rival coaches, Erkka Westerlund and Peteris Skudra, found plenty of opportunities to lament the officiating, but after back-to-back home wins for Torpedo in Nizhny Novgorod, the series was already reaching its conclusion. Jokerit prolonged the action with a home win in Game 5, but Vyacheslav Kulyomin’s late goal snapped a 2-2 tie in the next meeting and sent Torpedo through. 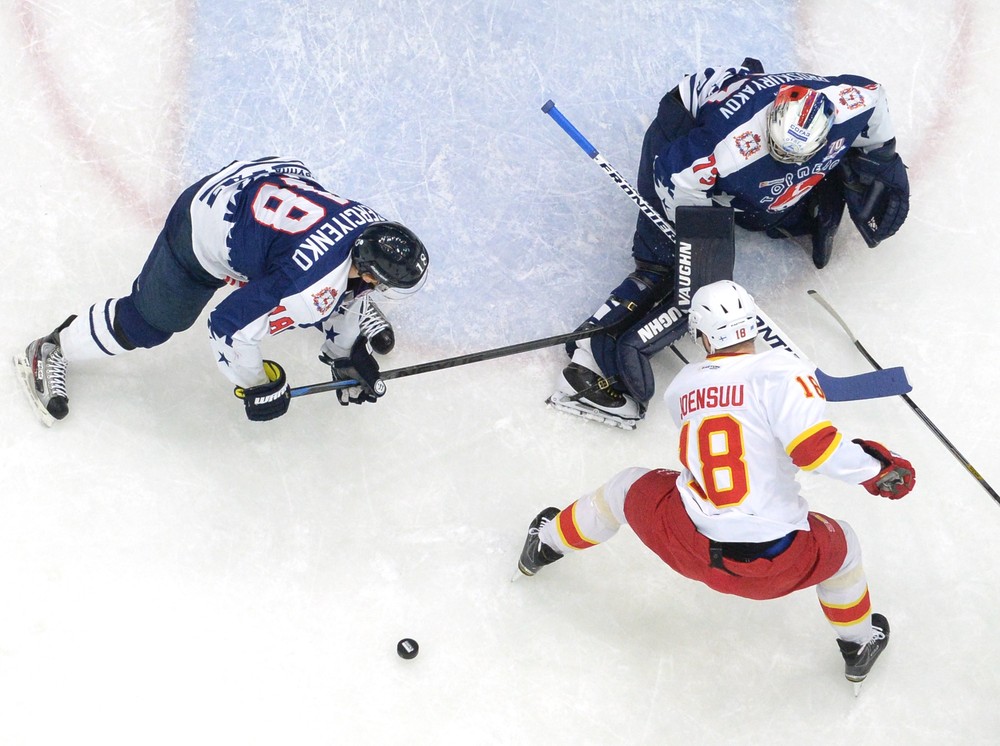 The most intriguing series was the battle between Lokomotiv and SKA. The Railwaymen were second to CSKA in their division but looked strong throughout a season when a miserly defense caught the eye. But Loko was undone by the unpredictable offensive talents of SKA and, in particular, by a sudden breakthrough in the Petersburg team’s defense. Slava Voynov, a mid-season signing from the LA Kings, helped to marshal far more resilient back line while goalie Mikko Koskinen hit a hot streak. After the teams shared 3-2 wins in Yaroslavl to start the series, SKA then produced three shut-outs on the spin to advance. 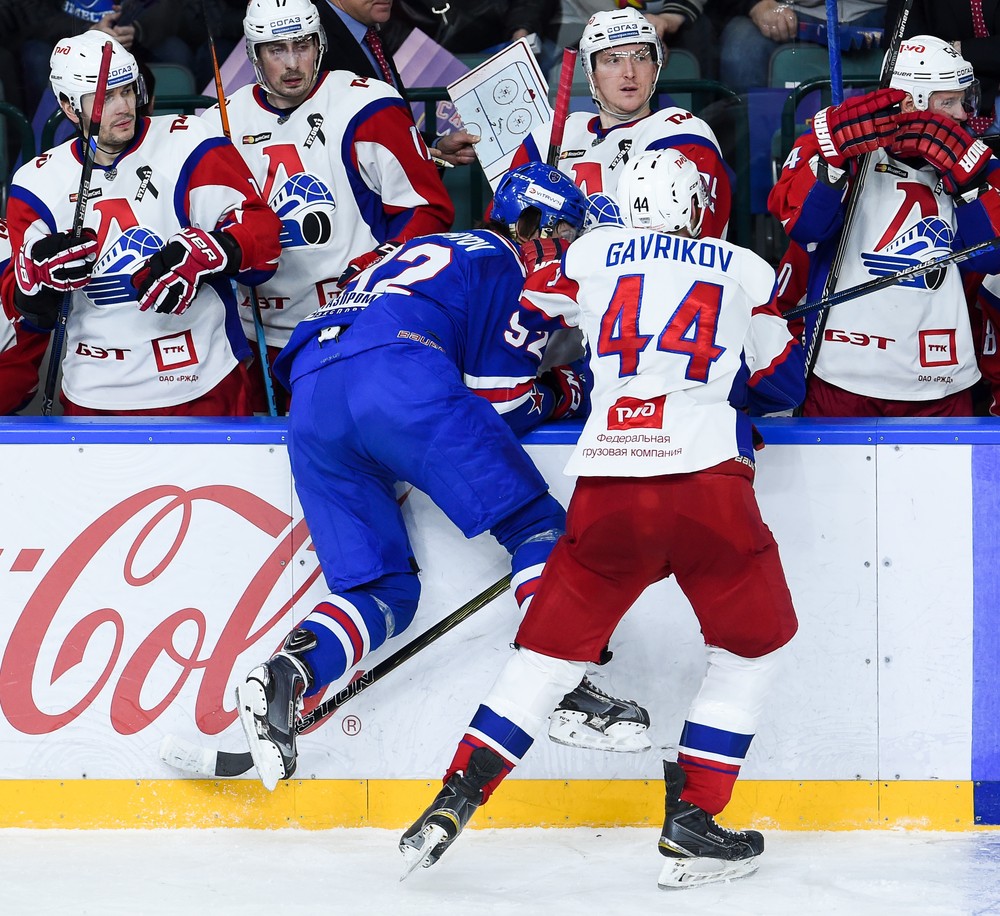 The Army Men were destined to meet old playoff foe Dynamo Moscow once again. The Blue-and-Whites eased past HC Sochi 4-0 with the Southern team fading alarmingly after such an impressive showing in the regular season.

If the Western Conference turned the form book upside down, the East went exactly to plan – although there were some nervous moments along the way. Avtomobilist stunned second-placed Metallurg Magnitogorsk by winning the opening game of that series – the team’s first ever KHL play-off victory outside of its native Yekaterinburg – but eventually went down 4-2 as Magnitka’s superior firepower told. 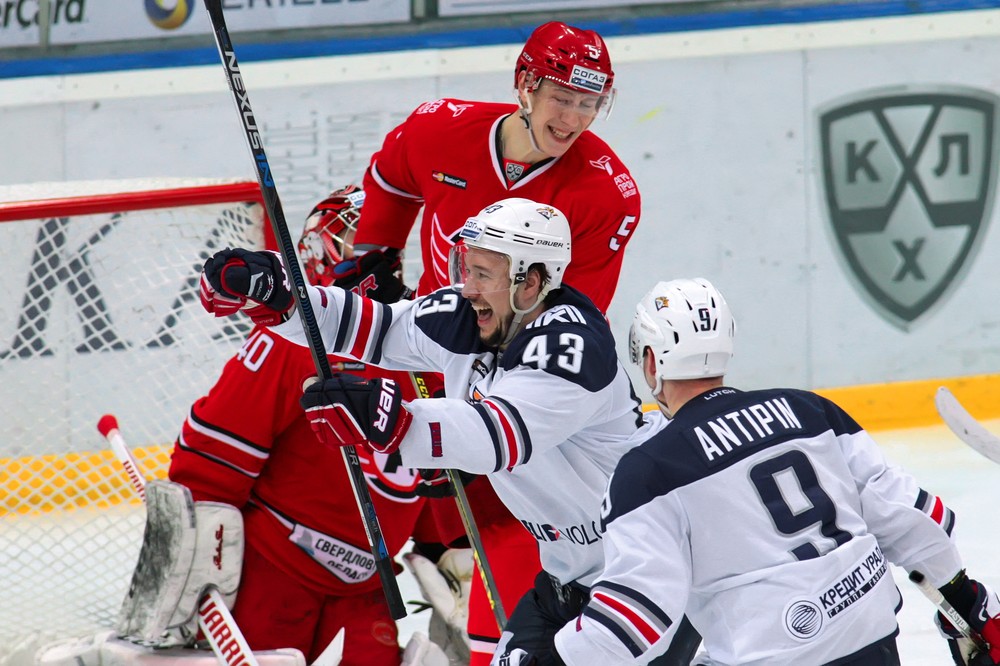 The ‘Green Derby’ between Salavat Yulaev and Ak Bars was a hard-fought as expected. The men from Ufa seemed to be in complete control at 3-1, but Ak Bars fought back to level the series. And impressive 8-0 victory, the most one-sided post-season shut-out in the KHL era, sent the series to game seven and when Dmitry Arkhipov scored on a nervous Niklas Svedberg after just 38 seconds of the decider, Salavat’s prospects looked bleak. But Igor Zakharkin’s team recovered in time to get a 3-2 win on the night and advance to the next phase. 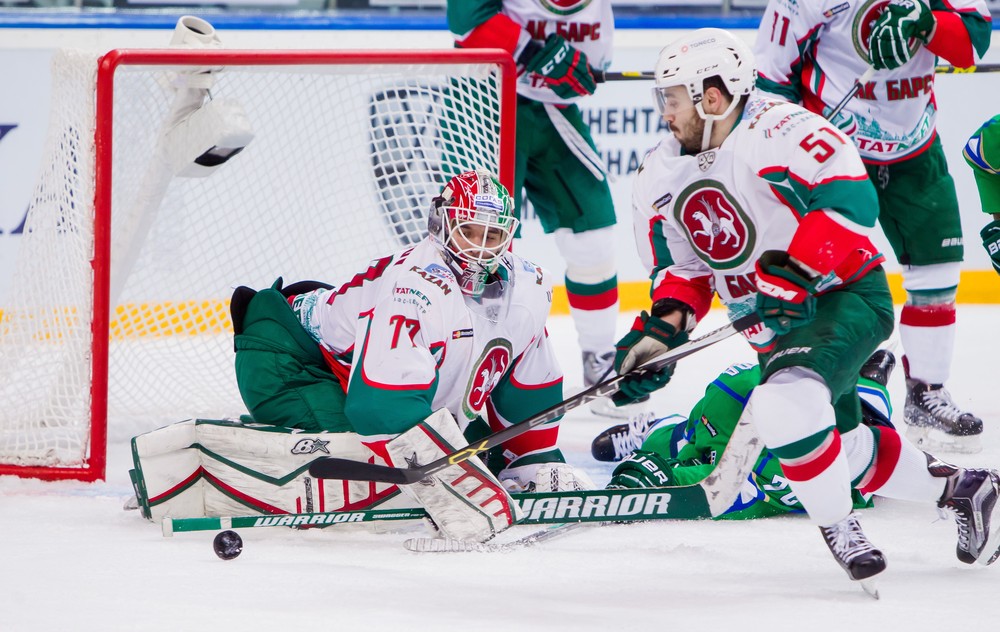 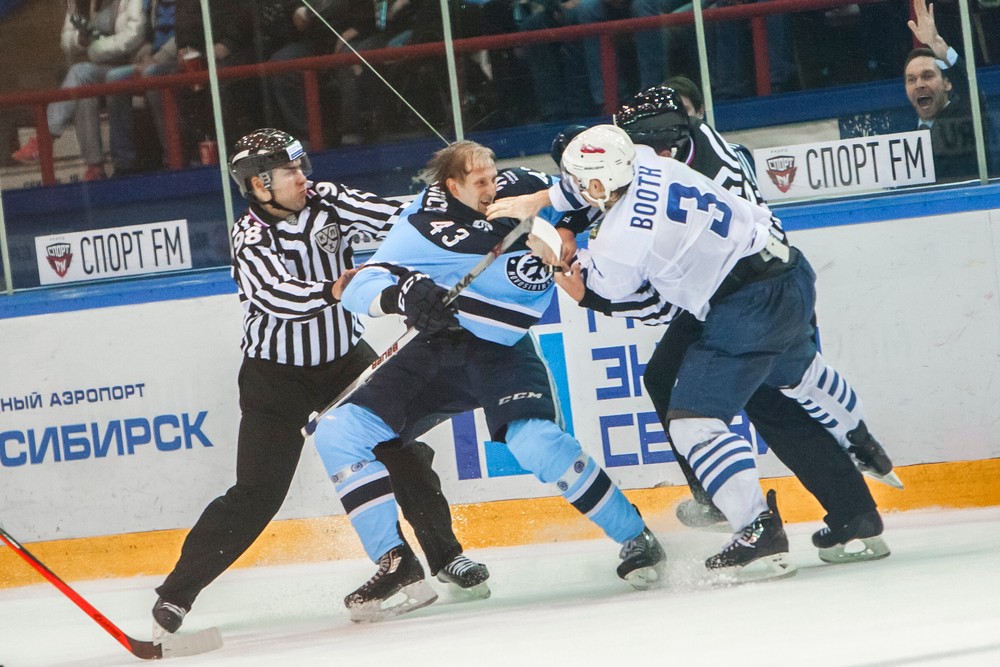 Torpedo travelled to CSKA hoping to unsettle the regular season champion with its robust style. In Game 1 the plan worked: Linus Videll gave the visitor an early lead and after Alexander Radulov tied the game, Yury Sergiyenko’s second-period goal started the contest with a shock result. CSKA, though, was not unduly disturbed and reeled off four consecutive wins to advance to the Western Conference Final for the second year in a row. 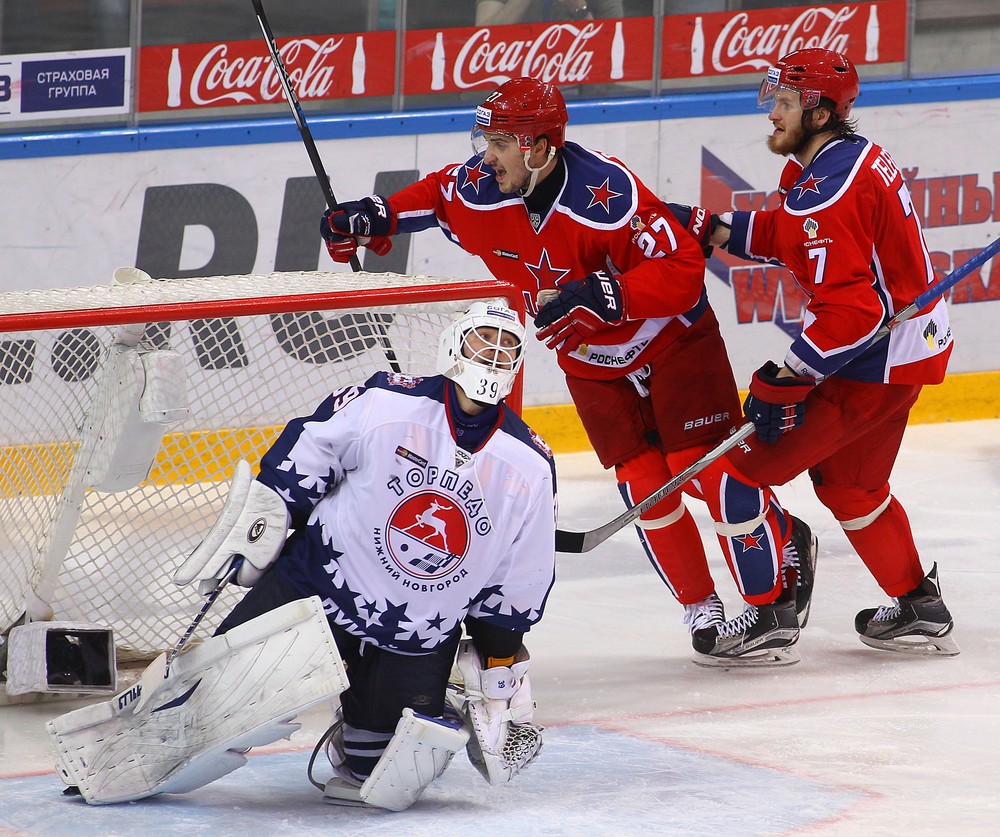 And for the second season running the other Army Men, SKA St. Petersburg, would provide the opposition. A 4-2 series win over Dynamo Moscow offered the usual battle between two teams that have become synonymous with playoff showdowns since 2012. But the action on the ice was overshadowed by the developing story in the SKA camp, wh ere Ilya Kovalchuk’s place in the team was coming under threat. Kovi, one of the stars of SKA’s Gagarin Cup-winning campaign of 2015, was a healthy scratch after the team’s defeat in game one in Yaroslavl. He returned to the ice for the first three games of the series against Dynamo but after the Muscovites won 4-0 in Petersburg to lead the series, Kovalchuk’s season was over with just four playoff appearances and no points to his name. 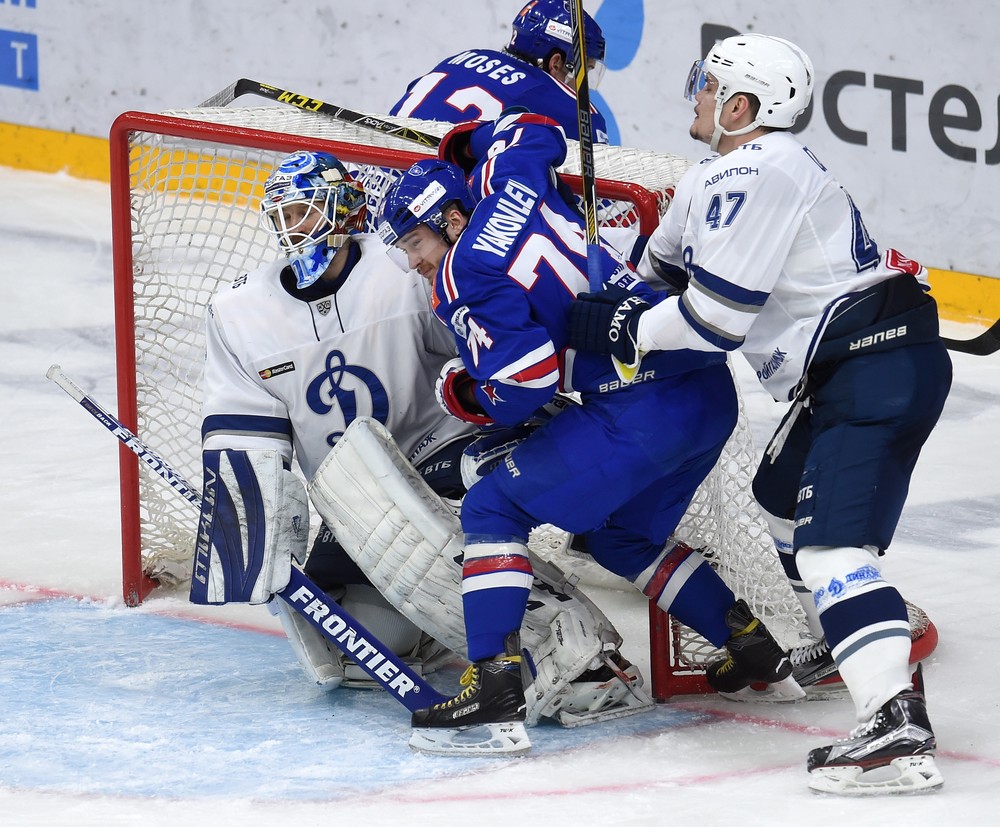 Salavat Yulaev went the distance again, edging past Avangard in a series that repeated the pattern of the opening round. Just as against Ak Bars, Salavat opened up a 3-1 lead. Once again, though, it struggled to finish the job and ended up in another game seven showdown. In the decider in Omsk, Salavat again fell behind to a first period goal, this time from Alexander Perezhogin. Again, though, it hit back. Sergei Soin tied it up before Maxim Mayorov scored off an assist from goalie Niklas Svedberg to win the game and the series. 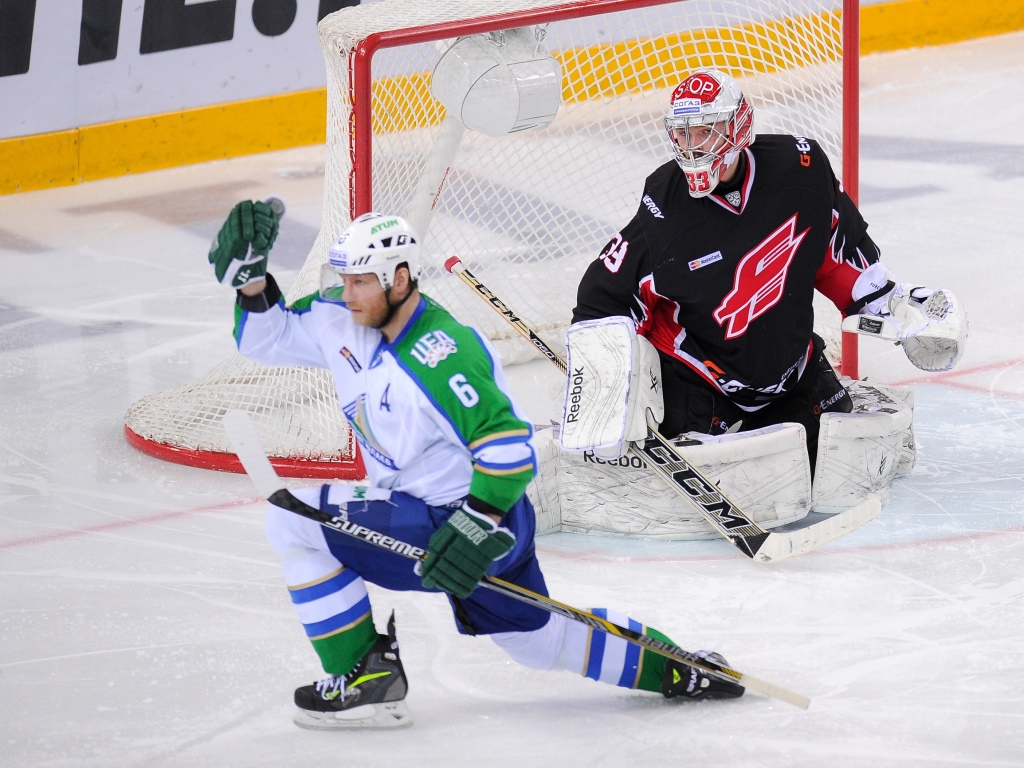 In the other match-up, Metallurg got revenge for last season’s defeat to Sibir, progressing in five games. The teams traded 3-1 wins in Magnitogorsk, but a 5-1 win on the road tipped the momentum in Magnitka’s favor. An overtime win, courtesy, inevitably, of Sergei Mozakin, brought the series back to the Urals with Metallurg 3-1 up and the end in sight. To nobody’s great surprise another Mozyakin gamewinner gave Magnitka a 2-1 victory and a place in the Conference Final. 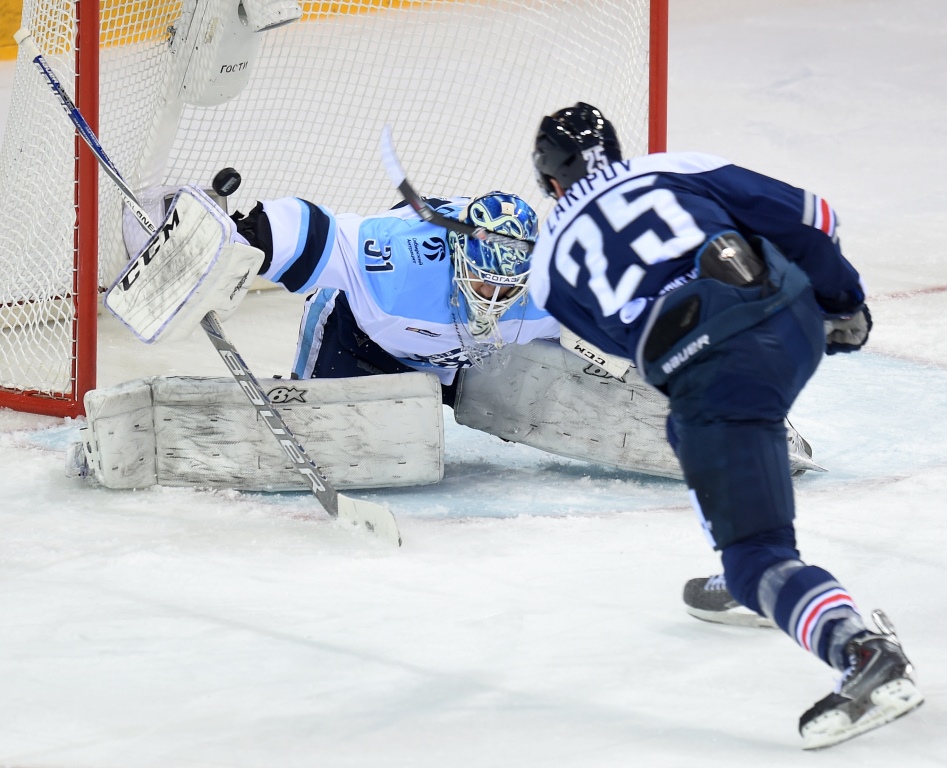 CSKA came into this one on a hot run of form – just one defeat in nine post-season games – but also well aware of what went wrong at this stage against SKA a year earlier. That time the Petersburg team trailed 0-3 before recovering to win the series and, eventually, the Gagarin Cup.

This time, though, there was no repeat. CSKA cruised into a 3-0 lead once again … and kept going. Game 3, a 1-0 overtime win on Geoff Platt’s goal in the 112th minute, was the longest goalless game in KHL history; Game 4 also went to overtime before Sergei Andronov’s first playoff goal snapped a 1-1 tie in the 62nd minute and sent CSKA to its first Gagarin Cup final. 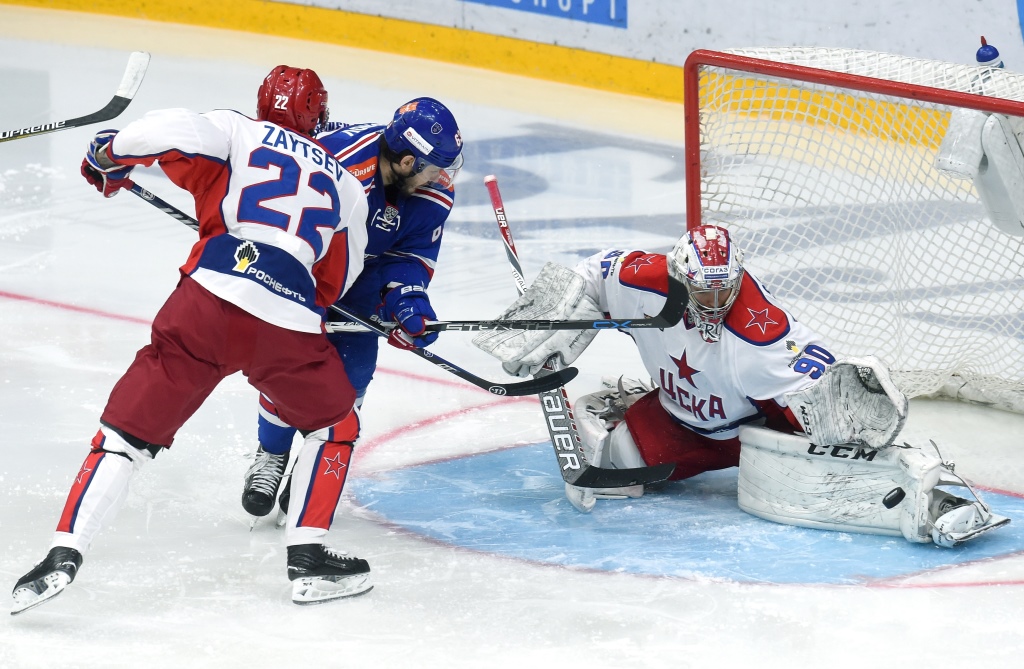 After winning eight games straight, CSKA could relax and watch the conclusion of the Eastern battle between Metallurg and Salavat Yulaev. But after two full-length series to get this far, Salavat ran out of steam and lost in five games. The damage was done at the start in Magnitogorsk. Game one hung on an overtime goal by the irrepressible Mozyakin, game two was a 6-1 blow-out.

Salavat edged a 3-2 verdict when the teams moved to Ufa, but that was as good as it got for the Bashkir team. It had a brave attempt at saving the series in game five, opening up a two-goal lead only to discover that Mozyakin wasn’t Magnitka’s only weapon. The star forward went pointless, but two assists from Alexander Semin and an overtime winner from Yaroslavl Kosov sent Metallurg to its second final in three years. 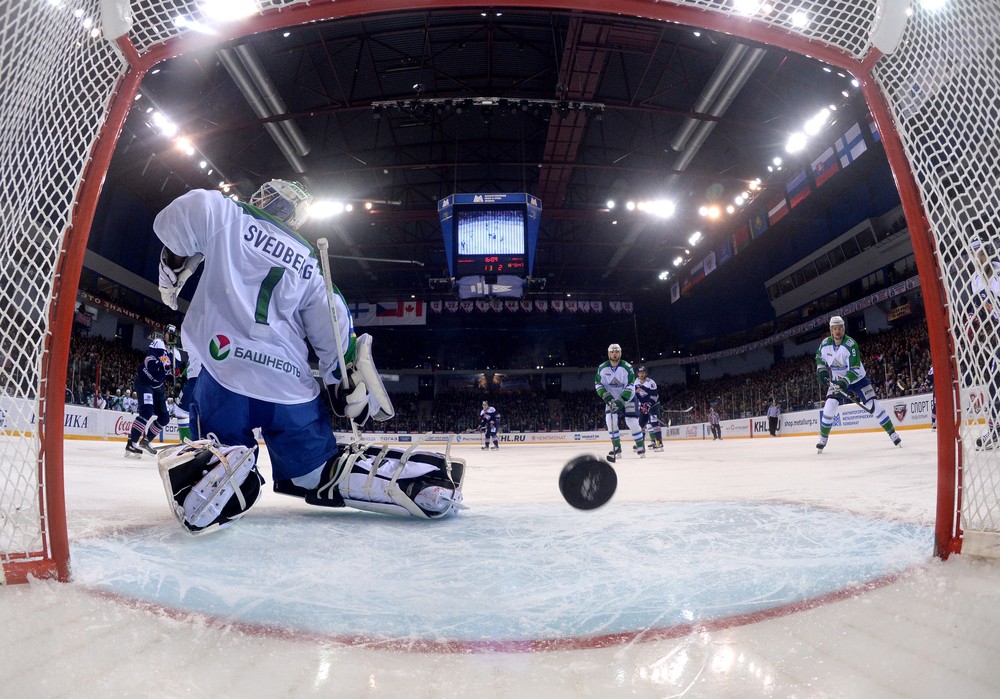 A great season demands a great finale, and this Grand Final delivered. CSKA, in blistering form, seemed unstoppable after powering to a 5-1 victory in Game 1, but Metallurg found an instant response. There was a slice of luck about the 2-1 victory in Game 2, as CSKA D-man Grigory Panin’s outstretched hand diverted Alexei Bereglazov’s shot into the net for a late, late winner, but there was no doubting that these two teams were destined to run each other close for the rest of the competition.

And so it proved. Games 2 through 6 were all settled by single-goal margins. In Magnitogorsk a last-minute Jan Kovar equalizer was trumped by Stephane da Costa’s overtime winner before a Tomas Filippi power play marker in the final stanza of Game 4 leveled the series on a 1-0 Metallurg win – CSKA’s first and only road defeat of the playoffs. 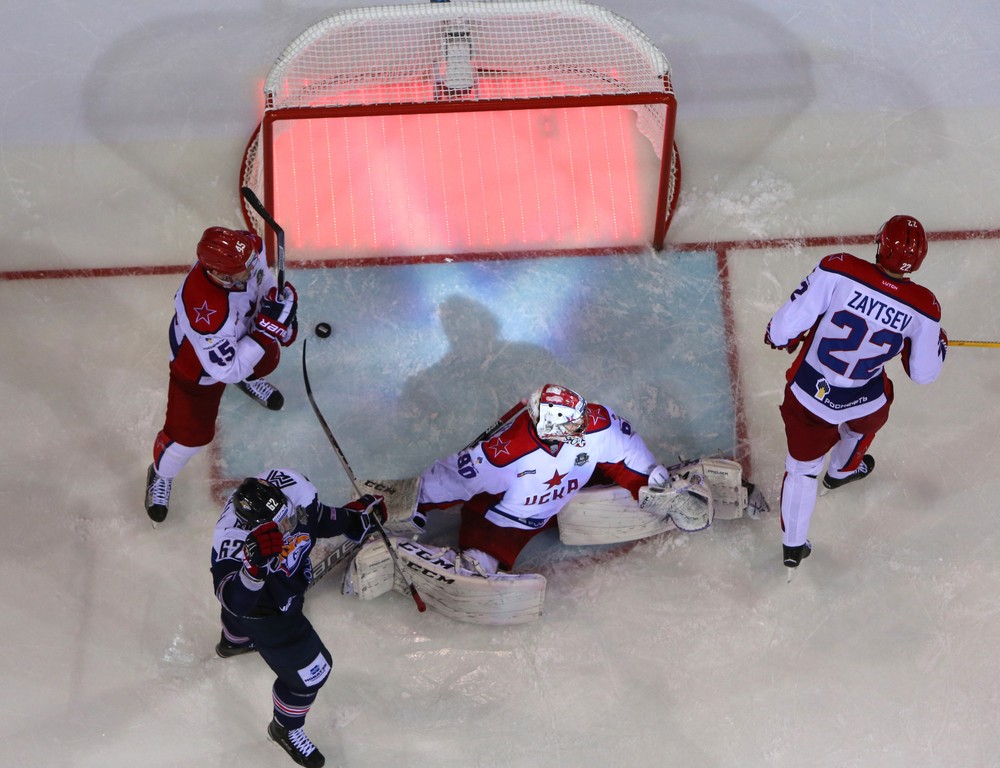 More overtime, and more Mozyakin magic in Moscow. Game 5 saw Metallurg get in front for the first time in the series. Mozyakin tied this up at 1-1 in the 55th minute and potted his fifth post-season game winner in overtime. He almost repeated the trick on home ice in Game 6, producing two assists to retrieve a 0-2 deficit before Mikhail Yunkov won it for CSKA and set up a Game 7 showdown.

Now the stage was set for two of the biggest scoring stars in the KHL, Alexander Radulov and Sergei Mozyakin. Who could fire his team to glory? Well, neither of them. The surprise heroes of game seven turned out to be defenseman Chris Lee and forward Evgeny Timkin. Lee transformed the game in an instant midway through the first period, slicing through intense CSKA pressure with a beautiful pass to set Timkin one-on-one for the opening goal. Then, after Maxim Mamin tied the game, Lee scored one himself to make it 2-1. That was enough to win the cup. Magnitka’s defense, backstopped by 36 saves from Vasily Koshechkin,  held CSKA at bay before Timkin grabbed an empty-netter to confirm Metallurg’s second Gagarin Cup in three seasons. 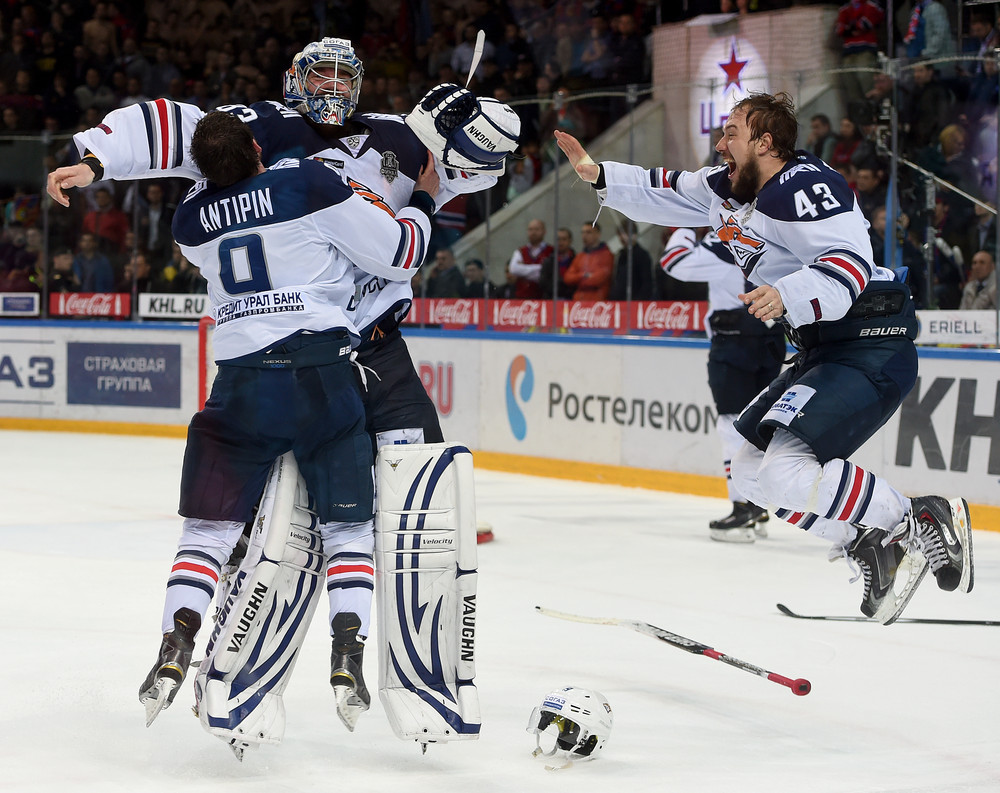