Defending champ is off the mark

SKA resisted a Lokomotiv fightback to claim its first post-season win in defense of the Gagarin Cup. After seemingly cruising to victory at 3-0, third period goals from Daniil Apalkov and Staffan Kronwall made it a tense one-goal game for the last 15 minutes. Lokomotiv piled on the pressure, outshooting SKA 16-2 in the final stanza, but Mikko Koskinen kept the Railwaymen at bay as SKA levelled the series.

The opening 15 minutes or so were also dominated by Loko, and only the post denied Dmitry Maltsev the opening goal in the fourth minute. But SKA held out and snatched the lead on 14:15 through Alexander Barabanov. It was a goal from nothing: Loko won a power play in SKA’s zone but Pavel Buchnevich hustled to turn over the puck in center ice and fed Barabanov. He got clear of the defense and slid his shot through Alexei Murygin’s five-hole to open the scoring against the run of play.

SKA extended that lead in the middle session with Sergei Shirokov getting the second in the 28th minute before Jarno Koskiranta was first to the rebound from a Steve Moses shot to make it 3-0. 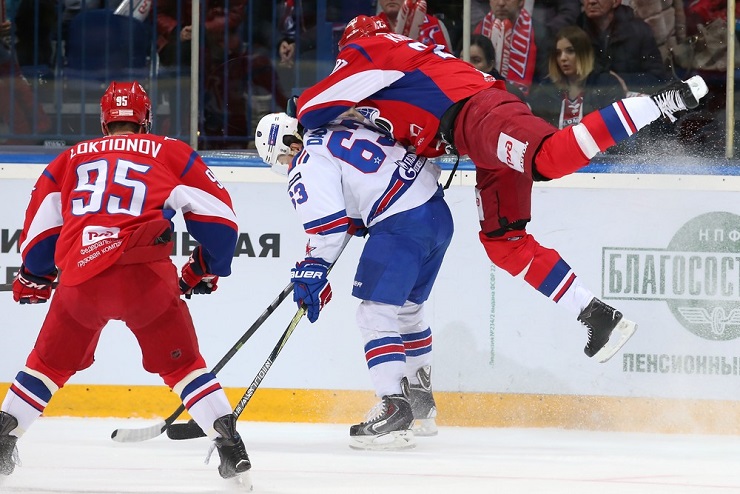 But Loko fought back in the final stanza. First Apalkov forced home the rebound from his own shot in the 41st minute, then Buchnevich was expelled from the game for slashing at the Loko forward. On that power play, Kronwall cut the deficit to one as he teased away across SKA’s zone waiting for the shooting channel to emerge. Once he had a sight of goal, the defenseman picked out a wrist shot that travelled from the top of the circle to the back of the net.