Green Derby is coming! Eastern Conference play-off round one preview

Green on green. Bashkiria vs Tatarstan. Two of the biggest clubs in Russia, led by two of the finest coaching brains of the KHL. It’s not surprising that many have described this as a cup final in the first round.

However, both teams have had difficult seasons. Ak Bars is going through a reconstruction after losing in the grand final last time round. The departure of key defenseman Evgeny Medvedev and Ilya Nikulin heralded the end of an era for Zinetula Bilyaletdinov’s team, and the new epoch hasn’t always matched the standards that the club has come to expect. Indeed, a run of five defeats at the end of January even raised the unthinkable prospect of Kazan missing out on the play-offs altogether. A rally in the final four games ensured that didn’t happen but apart from stand-out forward Justin Azevedo, few on the Ak Bars roster have wholly convinced the fans this season.

In Ufa, meanwhile, Anatoly Yemelin’s new era proved short-lived. His arrival from Avtomobilist was supposed to be an investment in the club’s long-term development. He was joined by some promising signings: defenseman Sami Lepisto from Avto, forward Linus Omark from Jokerit and returning hero Igor Grigorenko, back from CSKA. But the team didn’t gel right away, and the presence of Igor Zakharkin in a global coach-consultant role added extra pressure to the new man. In the end, Zakharkin took over behind the bench, with Yemelin working as his right-hand man from October 2.

Zakharkin initially delivered the consistency required, winning 10 of his first 12 games, but the new boss bounce faded and the team returned to its frustrating ways. Highlights included the form of Omark, playing the best hockey of his KHL career at times to finish with 57 points from 60 games. Lepisto also had a solid season in defense, but new goalie Niklas Svedberg did not always hit the heights hoped from him. After giving up 156 goals in 60 games, the pressure will be on the defense to improve in post-season.

The teams met four times on KHL duty in the regular season. Salavat Yulaev won three of those meetings, losing just once in Kazan on Nov. 10. 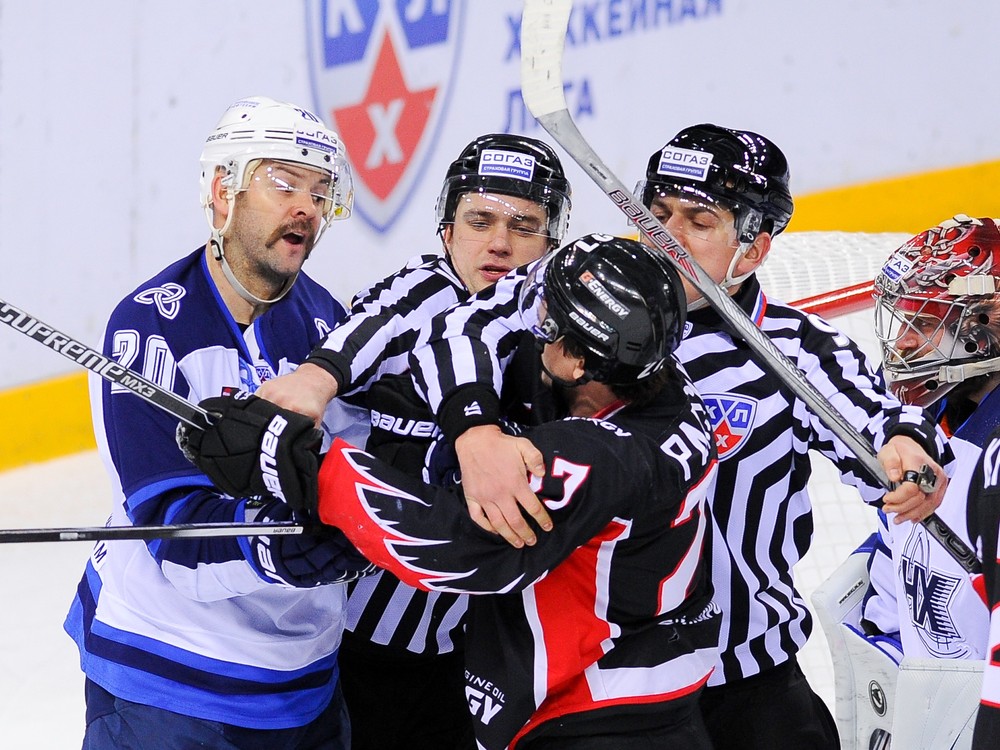 Avangard topped the East for the first time in five years, raising hopes that this hockey powerhouse is ready to roar again after several seasons of unaccustomed struggle. However, success comes against a backdrop of the Western Conference forging ahead: in the combined regular season table, Avangard comes down in fifth behind the big guns of the west. A more significant indicator of how the balance of power is shifting might be found in the transfer market: Sergei Shirokov’s move from Omsk to SKA in mid-season raised eyebrows, especially among those who remember that for much of the 2000s Russian hockey’s center of gravity tipped towards the East.

There’s a familiar look to the team’s leaders: Alexander Perezhogin keeps scoring regularly and gets good support from Vladimir Sobotka, Denis Parshin and Ilya Zubov. But two new faces also had a big impact. Goalie Dominik Furch managed eight shut-outs and a GAA of 1.78, while Czech D-man Michal Kempny topped the scoring from the blue line.

Neftekhimik snuck into the play-offs on the final day, thanks largely to Avangard’s win over Barys. Having achieved that goal, it was a bit of a surprise to hear club vice-president and former head coach Vladimir Krikunov calling for an end to the play-offs and a return to a league campaign in three stages to determine the destiny of the Gagarin Cup. The team did not produce any stand-out player during the season, although US international Dan Sexton’s return to fitness and form in the closing weeks was a big boost.

The teams met twice in the regular season, with each game ending as a 4-1 victory for the visitor. 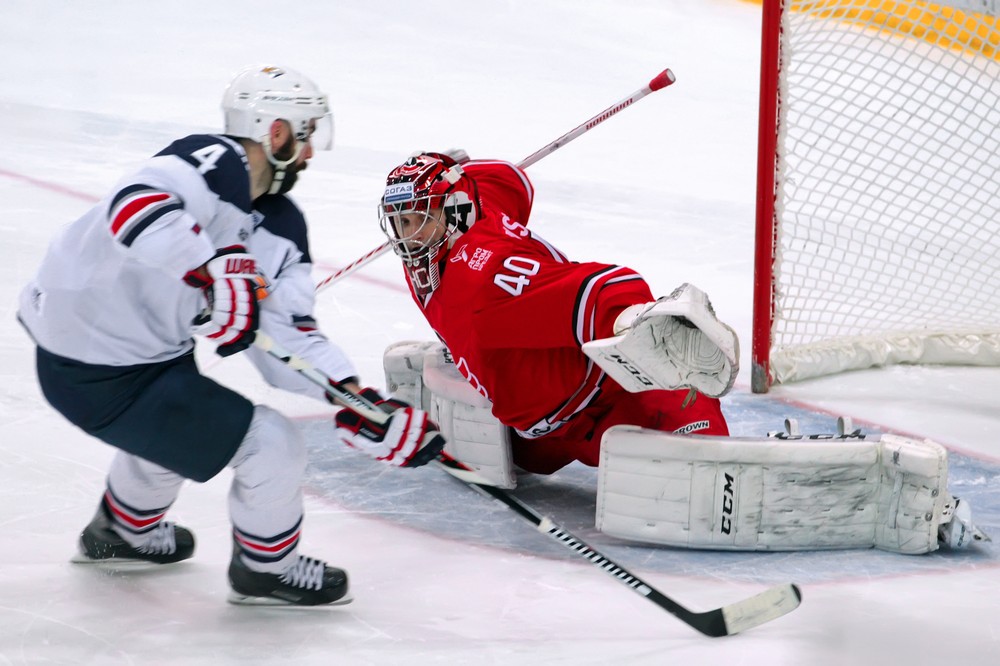 Sergei Mozyakin took his career goal tally to 413 by the end of the regulation season. That’s the second best record in Russian history and leaves him just 15 behind Boris Mikhailov’s all-time mark of 428. It would take a magnificent post-season to set a new record here, though: Mozyakin’s previous best goal haul was 13 as he fired Magnitka to glory in 2014.

Head coach Mike Keenan was one of the early casualties of the season, moving upstairs as Ilya Vorobyov took over behind the bench. That also led to some shuffling of the lines, with Wojtek Wolski emerging as a first-liner and the formidable Mozyakin-Kovar-Zaripov trio taking a rest. The changes helped Metallurg into second place in the East but now Vorobyov faces his first ever play-off campaign as head coach.

Avtomobilist started the season strongly despite losing head coach Anatoly Yemelin to Salavat Yulaev over the summer. However, Yemelin’s flamboyant replacement Andrei Razin had several ups-and-downs during the season – including being scratched from his role for one game as the team looked to reverse a long losing streak. That early promise faded and, for a time, the Yekaterinburg team was caught in a three-way dog-fight with Neftekhimik and Barys to secure a play-off spot as the season drew to a close.

However, the Ural team also boasts a star forward in Anatoly Golyshev. He only turned 21 a week ago, but that didn’t stop him posting 44 points in the regular season. His 25 goals placed him fourth on the snipers’ chart for the season, ahead of Alexander Radulov. That proved crucial for the team, and pushed Golyshev into the All-Star roster and into contention for a Team Russia call-up. If Avtomobilist is to add to its solitary victory in post-season games, Golyshev’s goals and Jakub Kovar’s consistently reliable contribution between the piping will prove crucial.

Games between these two have been close fought this season. Avto won the first two with a 2-1 success in Magnitogorsk in August and a 6-3 home win on Jan. 18. But a week later Magnitka won 6-2 and the teams met on the final day of the season in Yekaterinburg where Metallurg recovered a 0-2 deficit to win in a shoot-out. 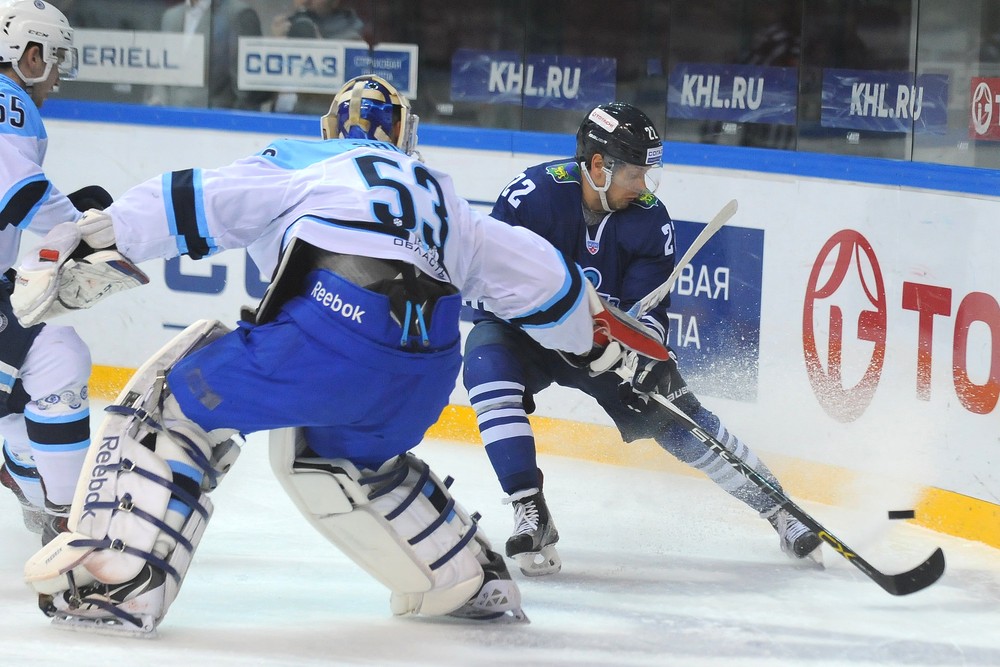 Sibir’s key men, once again, proved to be GM Kirill Fastovsky and head coach Andrei Skabelka. Confronted with the need to reshuffle the roster in the summer as last season’s success saw big names moving on, the duo did it again. Confounding those who believe that a big budget is the only way to compete at the top end of the league, the Siberians comfortably achieved third place in the East.

This season has been very much a team effort. While the offense lacks any spectacular scoring, it runs impressively deep. Seven forwards posted 20+ points, with Sergei Shumakov leading the way on 33. That septet includes David Ullstrom, Calle Ridderwall and Tomas Vincour, all of whom are in their first full season with the club after failing to settle elsewhere in the league. In defense, the eye-catching contribution has come from 21-year-old Ivan Vereshchagin, whose 13 points in his break-out season add gloss to a solid defensive contribution.

Admiral, meanwhile, may well be looking at Sibir as a template to follow as it prepares for its second play-off campaign. The men from the Far East are still adapting to the KHL and a tempestuous summer saw the club management and much of the playing staff head to Amur. But a modest budget did not prevent the team from a solid show in regular season, booking a play-off spot with some ease.

Once again, it’s a roster composed of players with a point to prove: Artyom Podshendyalov, for example, emerging from the VHL at the age of 26 and picking up 31 points this season. Konstantin Makarov, leading scorer this season with a career-best tally of 35 after years spent touring among seven clubs in search of decent minutes. The plan resembles what Sibir has achieved in recent seasons as it transformed itself from outsider to genuine contender: this play-off match-up will, at the very least, be a valuable learning experience for the club.

The teams met twice this season. Sibir won 2-0 at home in October but went down 4-2 in Vladivostok the following month.