Army Men on a revenge mission. Western Conference play-off round one preview

CSKA could be forgiven for a sense of deja-vu. Hailed as champion of Russia after taking the regular season crown, the Army Men are expected to make a serious bid for Gagarin Cup glory under the guidance of Dmitry Kvartalnov.

A year ago CSKA seemed to be cruising into the final after winning the first three games against SKA in the Western Conference final. But then it all went wrong: SKA roared back to win four in a row before going on to lift the cup; CSKA was left to lick its wounds.

Can they do better this season and complete a sweep of all three trophies? The good news is an improved defense. This season the team has given up just 87 goals, with youngster Ilya Sorokin in inspirational form. Still just 20, he’s managed 10 shut-outs and a GAA of 1.06 to cement himself as one of Russia’s brightest net-minding prospects. The best tribute to his progress is surely the lack of game time for experienced Swedish international Viktor Fasth. As usual, much depends on Alexander Radulov driving the offense. He produced 65 points in the regular season to lead his club once again. Aside from the familiar firepower, CSKA youngster Andrei Svetlakov has enjoyed something of a break-out season. As well as helping Russia to silver in the World Juniors, he’s earned himself a regular slot on the roster and chipped in with some important goals in the second half of the season.

Slovan is making only its second appearance in the play-offs and will hope to improve on its debut when it was swept in round one by a Dynamo Moscow team heading for a second successive Gagarin Cup triumph.

Head coach Milos Riha knows all about getting unfancied teams to go deep in the play-offs – he led Atlant to the 2011 finals against Salavat Yulaev – but will have his work cut out to repeat that achievement.

The good news is that the team enters post-season in impressive form: a run of 13 wins in 15 games from Dec. 22 to Feb. 8 secured eighth place in the West. Defenseman Cam Barker’s 40-point haul (9+31) this season makes him the top-scoring blue-liner in the league.

Back in November the Slovaks enjoyed two wins over CSKA – 3-2 in a shoot-out in Bratislava followed by a 2-0 success in Moscow. 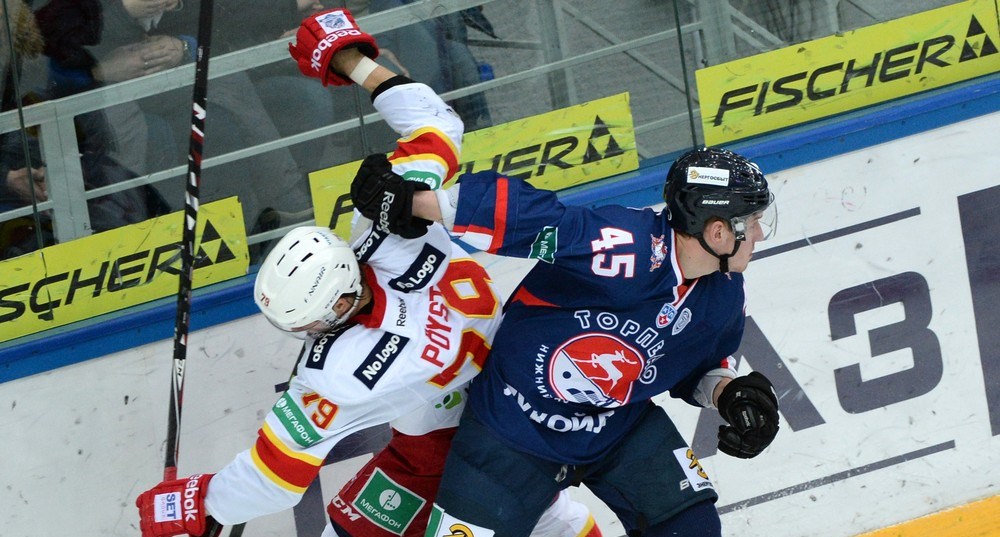 Jokerit’s success this season has been built on incredible consistency in defense. Over the 60 games of the regular season, Errka Westerlund has been able to call on his key blue-liners almost without interruption. Ville Lajunen, Topi Jaakola and Atte Ohtamaa missed just six games between them all season while skating around 20 minutes a night. Danish duo Philip Larsen and Jesper Jensen also saw plenty of action, with Larsen’s 36-point haul putting him among the most productive D-men in the league.

Up front the task was to find a replacement for the powerful LoKoMo line of Linus Omark (now Salavat Yulaev), Petr Koukal (now Avtomobilist) and Steve Moses (now SKA). Brandon Kozun and Peter Regin both scored 16 goals, going some way to filling that gap. Juhamatti Aaltonen finished the season strongly, picking up 7+6=13 points in the last month.

Just like last season, Torpedo finished second in the Western Conference. Unlike the previous campaign, though, Peteris Skudra’s team never got drawn into a battle to secure qualification. In contrast, the final weeks of the season were a disappointing time as Torpedo slipped out of the race for a top-four finish on the back of a 4-9 record in its last 13 games.

The roster has gone through frequent changes during the season: Kaspars Daugavins arrived from Dynamo to top the scoring with 35 points in 44 games; veteran defenseman Kirill Koltsov came late in the season from Salavat Yulaev. The big summer signing, Carl Klingberg, started well but faded as the season progressed and will need to recapture his early season form if Torpedo is to make progress in the play-offs.

Jokerit won both games between the two teams in the regular season, enjoying a 5-1 success in Helsinki before edging a 6-5 verdict after a shoot-out in Nizhny Novgorod. 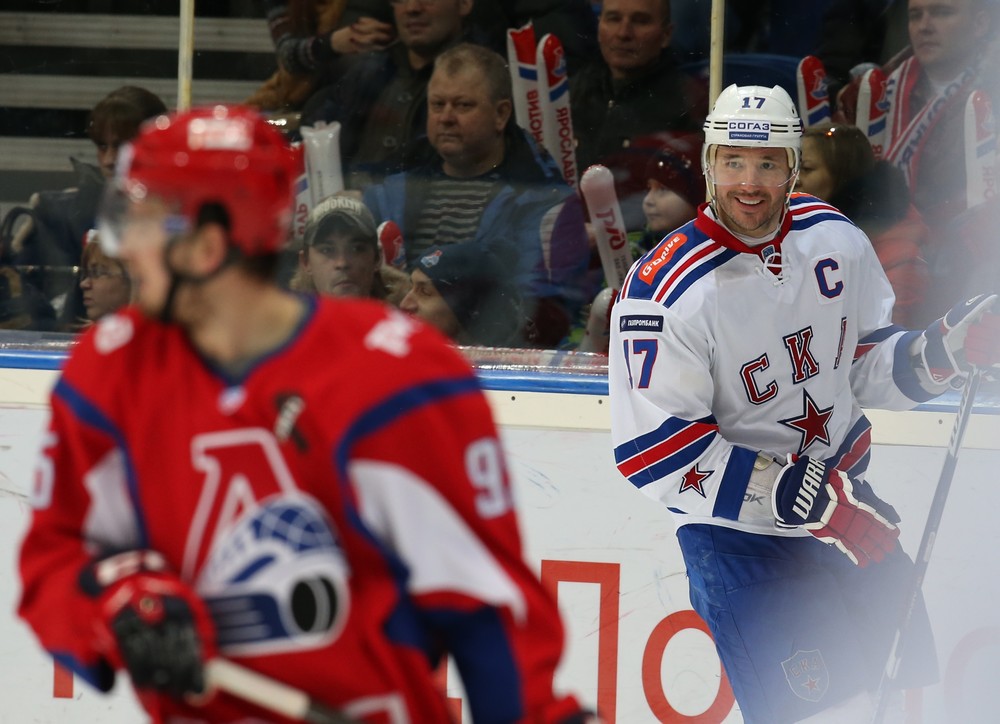 Few defending champions have endured a season as fraught as SKA’s. The champagne was barely finished before head coach Vyacheslav Bykov announced he was stepping down for family reasons. Incoming chief Andrei Nazarov brought his typically combative style to the club and departed early, a victim of inconsistent results and strained relationships in the organization. Sergei Zubov took over behind the bench on a full-time basis in mid-November and went on to win 10 of his first 12 games.

Zubov also shuffled the roster: in came Sergei Shirokov from Avangard and Steve Moses, whose move back to the States didn’t work out after his record-breaking season at Jokerit. Evgeny Artyukhin, meanwhile, saw no further action after late December.

As always, SKA packs a serious punch on offense, with Vadim Shipachyov returning 60 points this season. Ilya Kovalchuk had 49, Evgeny Dadonov 46 and mid-season signing Nikita Gusev, ex-Ugra, getting 35 in 33 games. But defensively things are less convincing. Like HC Sochi, SKA gave up 149 goals in 60 games despite acquiring Slava Voynov mid-season following his departure from LA Kings.

The contrast with Lokomotiv could hardly be greater: with Alexei Murygin in record-breaking form between the piping, the Railwaymen finished with the second best record in the league. The team conceded just 94 goals, while Murygin had a KHL-record 13 shut-outs and set a new mark for the longest spell without conceding a goal in the league’s history - 302 minutes, 11 seconds, just 3:45 shy of the all-time Russian record. The blank run also helped secure a 13-game winning streak.

That helped Alexei Kudashov, the head coach appointed in the summer after the demise of Atlant, steer his team high up the table. Duties on offense have been shared among the roster following the departure of Sergei Plotnikov: Daniil Apalkov has led the way with 16+27=43 points but impressively, 12 of the 19 attackers selected this season made it into double figures. Much like the teams’ previous play-off meeting in 2014, when Loko shocked SKA in six games, this looks like a clash between powerful offense and resolute defense.

The teams shared the points in their meetings this season. Loko won 3-0 in St. Petersburg on Oct. 10 before SKA took a 3-2 verdict in Yaroslavl on Nov. 28. 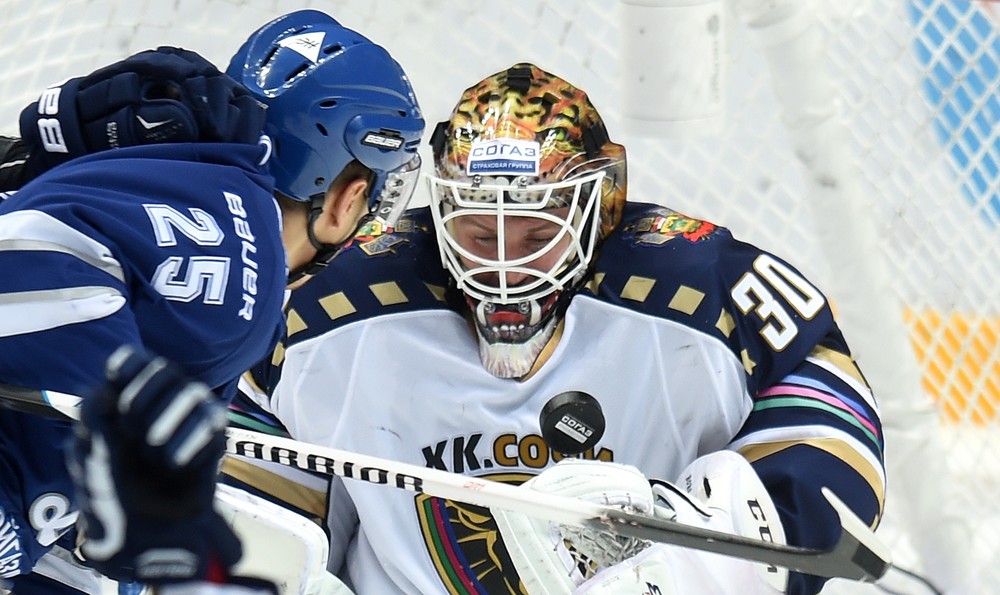 In its debut season HC Sochi made little impression on the play-offs, getting swept by CSKA in round one. This time around, though, Vyacheslav Butsayev’s team has been a far more serious proposition in the regular season, improving to a fourth-placed finish and taking the final seeded spot.

Butsayev has benefitted from being given time to settle his players into a system that they are comfortable with – a lesson other teams might consider after a season where a record-breaking 13 clubs have changed coaches. A steady improvement in production from the likes of Andre Petersson and Andrei Kostitsyn have led the offense, while at the back the addition of vastly experience goaltender Konstantin Barulin made a difference, as did the signing of Renat Mamashev from Sibir.

Their efforts have made the team harder to beat. However, Sochi also has the joint weakest defense of the eight teams in the Western play-off, conceding 149 goals in its 60 games.

Dynamo’s season fluctuated wildly. Early on the team struggled for any kind of consistency, a battle that ultimately cost head coach Harijs Vitolins his job. A run of five straight losses in late October put Vitolins under pressure, and a sequence of five defeats in six in the run up to the New Year saw him replaced by Sergei Oreshkin. The new man took charge of the last 15 games of the season and suffered just three defeats, one of those in overtime against CSKA.

Oreshkin was also helped by the return of Alexander Yeryomenko to full fitness. The goalie’s vast experience, which includes two successful Gagarin Cup campaigns, makes a huge difference to his team’s prospects. Another titled member of the team is defenseman Ilya Nikulin, a veteran of several trophy-winning campaigns at Ak Bars who came back to Dynamo in the fall after failing to secure a move across the Atlantic.

Elsewhere, Mat Robinson has been a stand-out performer, pocketing 38 points from the blue line to make himself the team’s second-highest scorer behind Alexei Tsvetkov. As usual, the Blue-and-Whites rely less on stellar scoring from individuals and more on a roster where every line is capable of finding the net. So the emergence of some bright young talent – Vladimir Bryukvin and Ilya Shipov most prominently – adds some welcome depth to a roster that is still undergoing a transition.

Sochi has the edge in head-to-head meetings this season, winning 4-3 at home and 4-2 in Moscow.