Neftekhimik secured its play-off place on the final day of the season despite losing 4-2 at home to Salavat Yulaev.

Even before the puck was dropped on the banks of the Kama river, Neftekhimik knew that Barys’ failure take three points from Omsk ensured that the home team was safely confirmed in eighth place … and would be heading to Avangard on Monday to being its post-season.

The first period saw the teams locked at 2-2: twice Neftekhimik led on goals from Jeff Taffe and Dan Sexton. Twice Salavat levelled through Zakhar Arzamastsev and Maxim Mayorov. But when Salavat Yulaev got a power play late on Igor Grigorenko took advantage and Anton Lazarev wrapped up a 4-2 win with an empty-netter.

But the result in Nizhnekamsk was off secondary importance after Barys failed to claim the regulation time win it needed at Avangard. Only a three-point haul would have given the Kazakhs any chance of making the top eight, but a shoot-out win in Omsk was not enough.

Barys saw its play-off hopes hanging by a thread after conceding twice in the first 14 minutes at Eastern Conference champion Avangard. Alexei Glukhov and Artur Lauta gave the home side the early advantage.

But the visitor was not going to give up on extending its season without a fight. Roman Starchenko got one back in the 17th minute and Brandon Bochenski tied the scores at 2-2 midway through the second. That was the end of the scoring, though, and when the hooter sounded with the teams still deadlocked, it confirmed that Barys would remain in ninth. Starchenko went on to claim the game-winner in the shoot-out, scoring with both his attempts, but the extra point was little consolation. 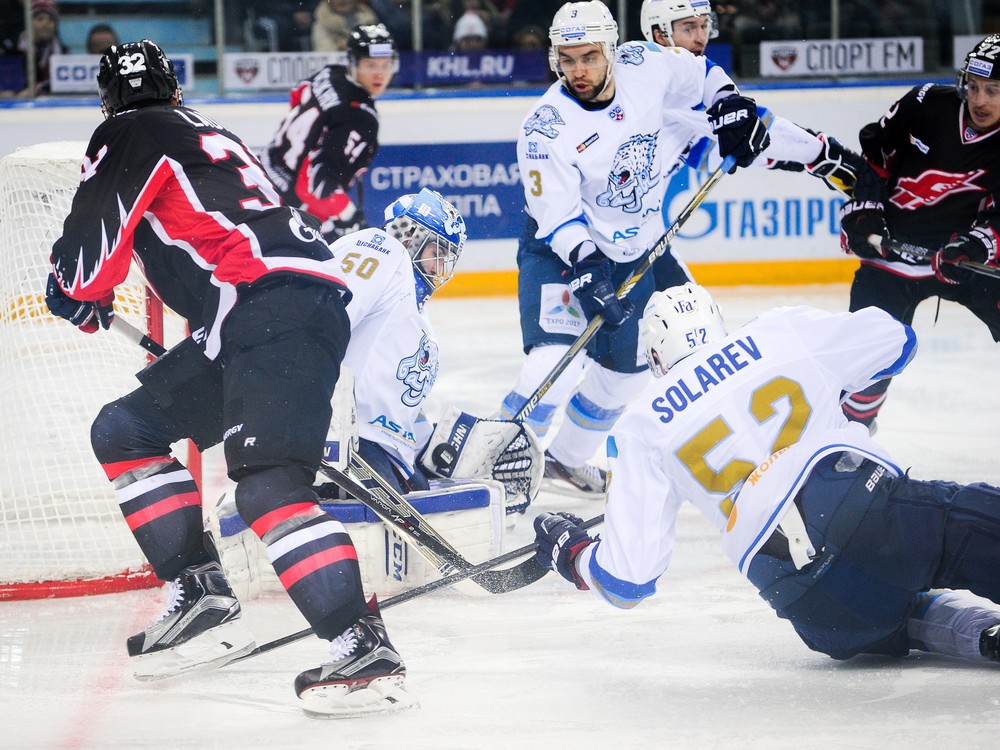 For many teams the final game of the season is one to take cautiously – especially with a gruelling play-off campaign ahead. But when Moscow rivals CSKA and Dynamo clash, there’s no room to relax.

For CSKA, the outcome mattered relatively little: top spot was secure and there was only a bit of local pride at stake. For Dynamo, though, victory would guarantee fifth place and a first-round play-off against Sochi rather than a formidable Lokomotiv.

At first it looked like the Army Men would come out on top. The home team made the better start and Alexander Radulov scored his 23rd goal of another prolific season to open the scoring in the 13th minute.

But Dynamo rallied, tying the scores on the power play late in the first period as Alexander Osipov found the target. Young Ivan Igumnov scored only his third career KHL goal as the middle stanza wound down – his strike proved to be the game winner, a memorable moment for the 19-year-old prospect. Another power play goal, this time from Andrei Mironov in the 47th minute, gave the Blue-and-Whites some breathing space and ensured the team finished the regular season in good form with just three defeats in 2016 so far. 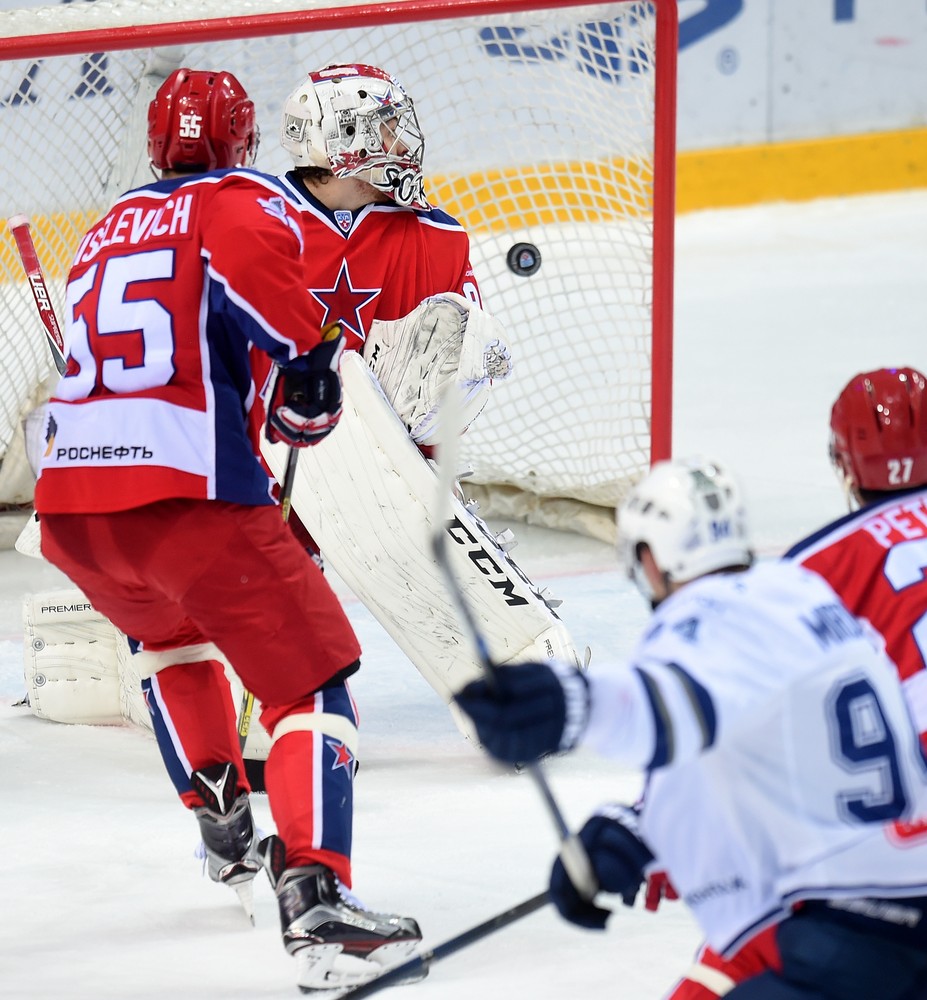 Dress rehearsal in the Urals

These two teams will get to do it all again next week in the play-offs after Avto let slip a two-goal lead and lost the chance to improve on seventh place.

Sergei Yemelin and Alexei Mikhnov put the home team in control in the first period but a late revival from Magnitka tied the game at 2-2. Wojtek Wolski started the recovery in the 53rd minute and Jan Kovar scored on the power play in the 56th minute to take the game to overtime.

Danis Zaripov went on to win it in the shoot-out, converting both of his attempts while Kirill Polozov was Avto’s only scorer.

The teams now travel to Magnitogorsk for Game 1 of the play-offs on Monday. 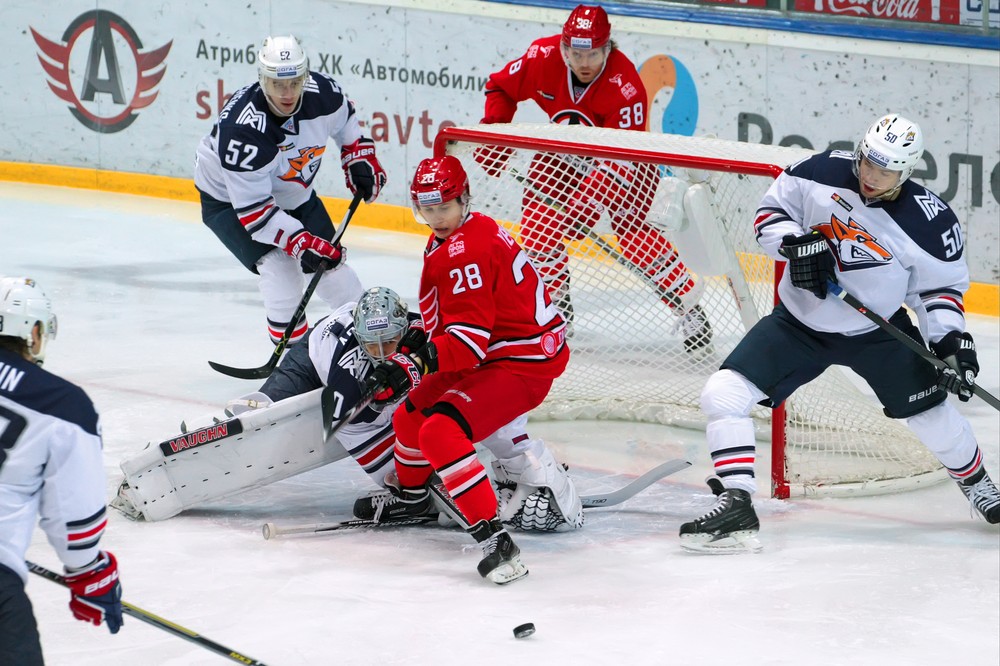 Around the league – Eastern Conference

Sibir limbered up for its play-off campaign with a comfortable 3-0 win over Metallurg Novokuznetsk. Oleg Gubin’s power play goal got things rolling in the 11th minute and third-period strikes from Sergei Shumakov and Tomas Vincour wrapped up the win. Alexander Salak made 27 saves as the Novosibirsk team moved on to a play-off meeting with Admiral.

Admiral wrapped up its regular season with a 3-1 win at home to Amur, reversing the scoreline from the teams’ meeting in Khabarovsk on Tuesday. Konstantin Makarov and Alexander Gorshkov put Admiral 2-0 up in the first period before Amur replied in the second thanks to Vyacheslav Ushenin. David Booth found the empty net to make the points safe. Victory keeps Admiral in sixth place, setting up a play-off meeting with Sibir.

Ak Bars won 3-1 at home to Lada to secure fifth place in the Eastern Conference and set up a play-off showdown with old rival Salavat Yulaev. Oscar Moller scored twice in the first six minutes to set up the victory. Stanislav Bocharov got one back in the second period but Igor Mirnov settled the outcome when he made it 3-1 on the power play early in the third.

Ugra and Traktor’s play-off hopes were long gone but the teams signed off with a high-scoring game in Khanty-Mansiysk. Traktor won it 7-4, helped by a double from Vyacheslav Osnovin. Igor Bortnikov scored twice for Ugra in a losing cause.

Around the league – Western Conference

Lokomotiv finished the regular season on a high with a 5-1 thrashing of Slovan. Denis Mosalyov opened the scoring in the first period but Michel Miklik tied it up in the 27th minute. Alexander Polunin reinstated Loko’s lead soon afterwards and further scores from Stanislav Chistov, Yegor Korshkov and Pavel Krasovsky completed the win.

Western runner-up Jokerit fell to a 4-2 reverse on the final day against Spartak. The visitor opened up a 2-0 lead in the first period as Sergei Shmelyov and Alexander Vasilyev found the target. Pascal Pelletier pulled one back but Charles Genoway added what proved to be the winner in the 32nd minute. Ville Lajunen kept the game in the balance until the closing seconds but Vasilyev got his second into an empty net to settle the outcome.

Defending champion SKA also goes into the play-offs on a losing note after slipping to a 4-2 reverse at Dinamo Riga. First-period goals from Gints Meija and Andris Dzerins got things started here. Vadim Shipachyov pulled one back for SKA but Mikelis Redlihs added a third late in the middle session. The teams traded further goals in the final session as Pavel Buchnevich got one back for SKA before Kaspars Saulietis ended Dinamo’s season on a high note.

Two goals from Evgeny Skachkov helped HC Sochi to a 6-4 win at home to Medvescak. The Croatians led twice early on, but Skachkov’s second tied the game at 2-2 and from then on Sochi had the edge. Ziyat Paigin’s power play goal in the 47th minute was the game-winner.

Torpedo will finish in seventh and face Jokerit in the play-offs after a shoot-out loss at Dinamo Minsk. Matt Ellison got the tie-breaker after the game finished 2-2. Linus Videll and Alexei Sopin gave Torpedo the lead twice; Paul Szczechura and Jonathan Cheechoo kept Dinamo in contention.

Vityaz finished the season with a 4-2 win at Severstal in another dead rubber. Severstal twice led in the second period but could not hold on to that advantage. Vityaz hit the front with two goals in the 52nd minute. Anton Korolyov made it 3-2 and Maxim Afinogenov converted a penalty shot to complete the scoring.