Avtomobilist is close to confirming a play-off place, but Neftekhimik and Barys remain neck-and-neck in the East. Meanwhile, Dinamo Minsk’s failure to hold a 2-0 lead in Nizhnekamsk puts the Belarusians on the brink of elimination in the West.

Avtomobilist was the day’s big winner. The Yekaterinburg team claimed victory at Spartak after second-period goals from Eero Elo and Kirill Polozov opened up a 4-2 lead that lasted until the end. The first period was more competitive: Spartak took the lead through Alexander Mereskin, Avto replied with goals from Alexei Mikhnov and Artyom Garayev, then Lukas Radil tied it up at the first intermission. 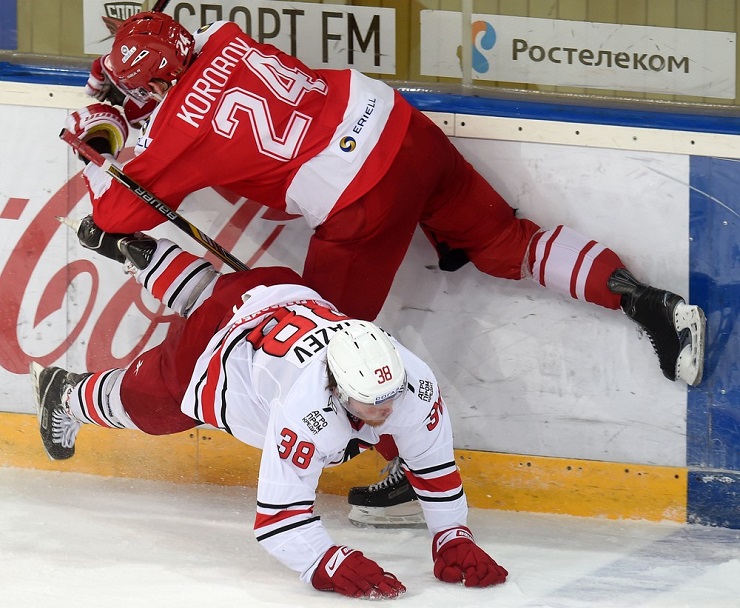 Ak Bars, a team whose record suggests that a true post-season is impossible without a trip to Kazan, left qualification later than usual. But after snapping a five-game losing streak last time out, a comfortable win over Metallurg rubber-stamped its ticket to the play-off.

Igor Mirnov opened the scoring on the power play in the eighth minute, but it wasn’t until the middle session that the home team really took control. Alexander Svitov and Justin Azevedo stretched the lead to 3-0. Ilya Nekolenko managed a consolation effort for Kuznya in the third.

Neftekhimik recovered a 2-0 deficit to beat Dinamo Minsk and leave the Belarusians with an almost impossible task to make the play-offs. Dmitry Ambrozheichik got his first of the season and Sergei Drozd made it 2-0 for Dinamo early in the game but Neftekhimik hit back on goals from Dan Sexton and Denis Kuzmin in the third period. That took it to overtime where Igor Polygalov potted the winner.

Dinamo is now eight points adrift of Slovan with just three games to play. Only victory in Sunday’s game against Jokerit will keep its hopes alive, and even then Slovan can secure eighth spot with a win over Dinamo Riga on Monday.

Neftekhimik faces a shoot-out with Barys for the final play-off spot in the East after the Kazakhs won 3-2 in Riga to leave the two on 83 points. Brandon Bochenski got the decisive goal in the 55th minute, putting his team ahead for the third and final time. Earlier, Nigel Dawes and Dustin Boyd scored for Barys but Kaspars Saulietis and Gints Meija twice equalized for Dinamo.

The Army Men sealed the regular season championship with victory last time out at Magnitka, but the club could not extend its run to match its best ever in the KHL.

Instead, in a tense game in Ufa, a single moment gave the home team the points. Enver Lisin was the architect, making an explosive rush to the net from the boards as the final seconds of a home power play ticked down. His shot was blocked, provoking a frantic scramble in the slot, and Khlystov was on hand to tuck away the loose puck from close range.

Between the piping Niklas Svedberg had 18 saves for Salavat Yulaev, half of them coming in the third period. His fellow Swede, Viktor Fasth, made 16 stops for CSKA.

SKA was the day’s biggest scorer, powering to a 7-2 victory over Ugra. Evgeny Dadonov led the way with two goals, both in the second period, and there were further scores for Ilya Kablukov, Joakim Lindstrom, Ilya Kovalchuk and Dmitry Yudin. Pavel Medvedev and Igor Bortnikov scored for Ugra.

Dynamo Moscow romped to a 5-2 win at home to Jokerit. The damage was done early on as the home team opened up a 4-0 lead by the 35th minute. Andrei Alexeyev, Artyom Fyodorov, Vladimir Bryukvin and Dmitry Vishnevsky found the net. Jokerit reduced the deficit on goals from Pascal Pelletier and Juhamatti Aaltonen late in the second, but Alexei Tereshchenko completed the scoring in the third. 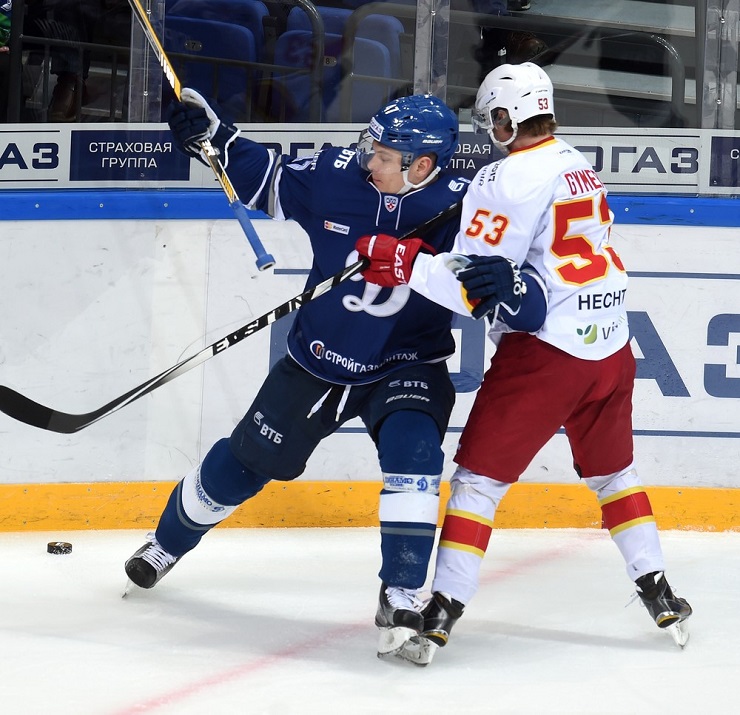 Metallurg Magnitogorsk kept itself in with a chance of claiming the Eastern Conference title thanks to a narrow 4-3 victory over Severstal. It took two late goals – Sergei Mozyakin on the power play and a short-handed Oscar Osala marker – to lift Magnitka to success after Igor Skorokhodov scored twice to give Severstal a 3-2 lead. Danis Zaripov finished with a goal and two assists while Jan Kovar also scored for the host. Ilya Khokhlov got Severstal’s other goal.

Yegor Morozov got a shoot-out winner for HC Sochi following a 1-1 tie with Avangard. Both goals came in the first period: Andrei Kostitsyn put the home team in front after 13 minute but Yury Petrov tied it up with a penalty shot in the 19th. Petrov did not attempt to repeat that success in the shoot-out and Sochi goalie Konstantin Barulin saved from Artur Lauta and Pyotr Khokhryakov.

Georgy Belousov scored early in overtime to give Lada a 2-1 home win against Sibir. His power play goal came just 17 seconds into the extras to give the Motormen the extra point. Alexei Mastryukov gave Lada the lead after 32 seconds of the game; Sibir levelled in the second period through Maxim Shalunov. That point for Sibir takes it to 100 for the season.