A derby win at Spartak made it 11 straight successes for the Army Men and puts Dmitry Kvartalnov’s team within touching distance of retaining the regular season title it won a year ago.

CSKA leads closest rival Lokomotiv by eight points – and the Yaroslavl team has just three games left to play, meaning one more victory would give the Muscovites the prize.

This latest victory came on the back of two more goals from Andrei Svetlakov, one of the stars of Russia’s recent World Juniors campaign. He scored early in the second to cancel out Sergei Shmelyov’s opener and then got the vital go-ahead goal at the start of the third to give CSKA the lead for the first time in the game at 3-2.

Alexander Radulov took his points tally to 62 with two assists and the fourth goal for CSKA. Nikita Zaitsev was the other scorer for the winner, cancelling out Evgeny Bodrov’s second-period goal for Spartak. 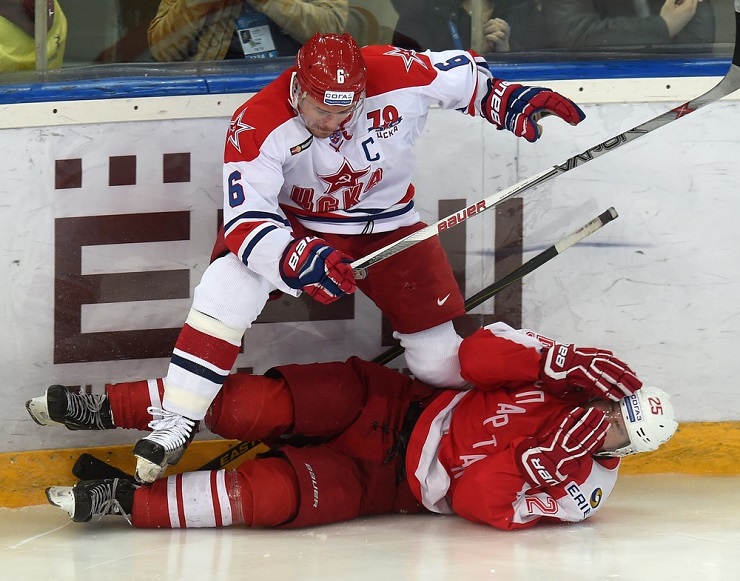 In Sunday evening’s games two more teams followed Dynamo into the post season. For Metallurg Magnitogorsk, a play-off campaign is the minimum requirement for any season, but in Sochi the team’s current fourth place in the Western Conference represents an encouraging improvement in its sophomore year of KHL hockey.

Magnitka, not for the first time, picked up a narrow victory over an Ak Bars team that has now lost five on the spin. Wojtek Wolski got the only goal in Tatarstan, settling the game in the 19th minute. Goalies Vasily Koshechkin and Emil Garipov both made 31 saves; crucially the latter faced 32 shots. 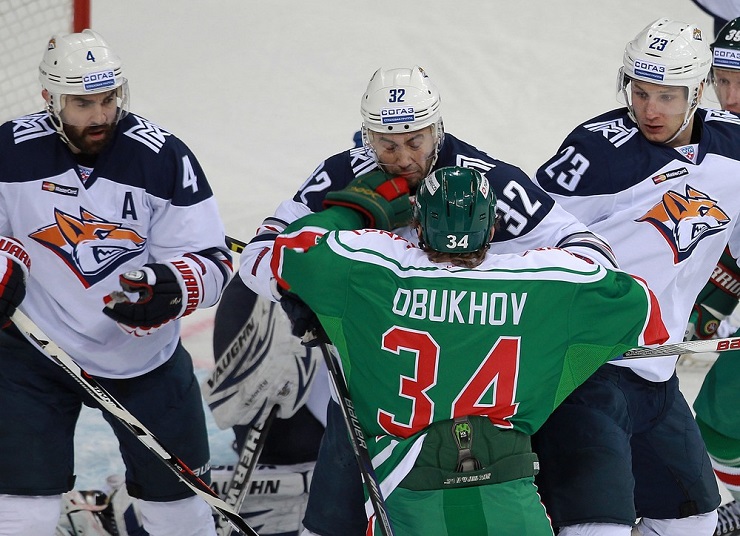 Sochi, meanwhile, shattered Loko’s winning run and all but ended the Railwaymen’s prospects of catching CSKA at the top of the table. Much of Lokomotiv’s success this season has been built on rigid defense, but there was no answer to a powerful attacking display from the Black Sea team.

Mikhail Anisin, one of the league’s great enigmas, opened the scoring but two goals from Yegor Averin turned the game around – albeit briefly. Andre Petersson and Ben Maxwell scored in short order in the middle session to put Sochi back ahead and Mikhail Grigoriev’s equalizer just before the intermission merely delayed the final onslaught.

Dynamo secured its play-off place thanks to a convincing win at Admiral, and now stands fourth in the Western Conference.

In-form forward Artyom Fyodorov scored two, taking his tally to four goals in three games as the club wrapped up its Far East tour with a four consecutive victory.

But the early stages were hard-fought. Dmitry Lugin gave Admiral the lead in the first period before Fyodorov converted a 5-on-3 power play to level the scores. Still shorthanded, the home team responded immediately when Artyom Podshendyalov made it 2-1 just nine seconds after Fyodorov’s strike, but Ansel Galimov scored for the second game running to make it 2-2. Galimov’s second in two games emphatically ends a goalless streak that dated back to October.

Maxim Karpov made it 3-2 late in the second period and Fyodorov struck on the power play once more before Ilya Shipov completed the scoring. 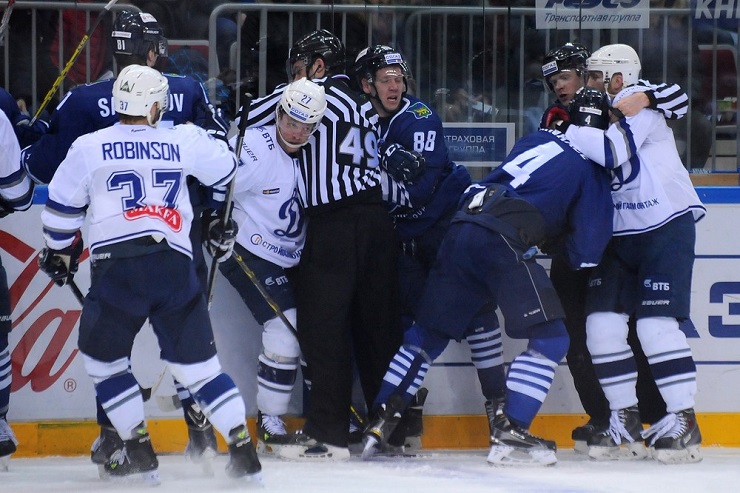 Medvescak’s hopes of a play-off spot took a severe dent with a 5-1 loss in Siberia. The Croatians have now conceded 11 goals in two games and are eight points adrift of eighth-placed Slovan with just four games left to play.

The Zagreb team made a bad start, giving up a goal to Robert Kousal in the third minute, but recovered to tie the scores thanks to young Swedish defenseman Adam Deutsch. His 11th-minute goal was his first in the KHL.

Metallurg forged ahead midway through the game with two goals in three minutes. Ilya Musin scored on the power play before Roman Manukhov made it 3-1. The third period saw Mikhail Plotnikov and Cade Fairchild finish the job to give lowly Kuznya a morale-boosting send-off in its final home game of the season.

Slovan failed to capitalize on its rival’s stumble, though, going down to a defeat at Sibir. Maxim Shalunov’s short-handed goal in the 55th minute settled this one, snapping a 2-2 tie. David Ullstrom gave Sibir an early lead, but second-period goals from in-form duo Andrej Stastny and Lukas Kaspar put the Slovaks in front early in the second. Shalunov led Sibir’s recovery, tying the game midway through the second period before going on to grab that winner and keep his team firmly in the race for the Eastern Conference title.

Vityaz won 4-1 at Amur in this clash of the outsiders. Two goals from Vyacheslav Solodukhin sandwiched a marker from Maxim Afinogenov as the visitor opened up a 3-0 lead. Evgeny Grachyov got one back for Amur early in the third but Roman Horak completed the scoring.