The league leader made it 10 wins in a row after coming from behind to defeat the Finns in Moscow.

Juhamatti Aaltonen put the visitor in front on the power play in just the fourth minute, but after a slow first period the Army Men began to march forward after the intermission. The home team led the shot count 15-3 in the middle stanza and Andrei Svetlakov tied the scores in the 35th minute.

The final session was similarly one-sided and Ivan Telegin enhanced his burgeoning reputation when he potted the game winner in the 43rd minute. CSKA remains two points clear of Lokomotiv at the top of the table, and has a game in hand over its Yaroslavl rival as it looks to defend last year’s regular season championship. 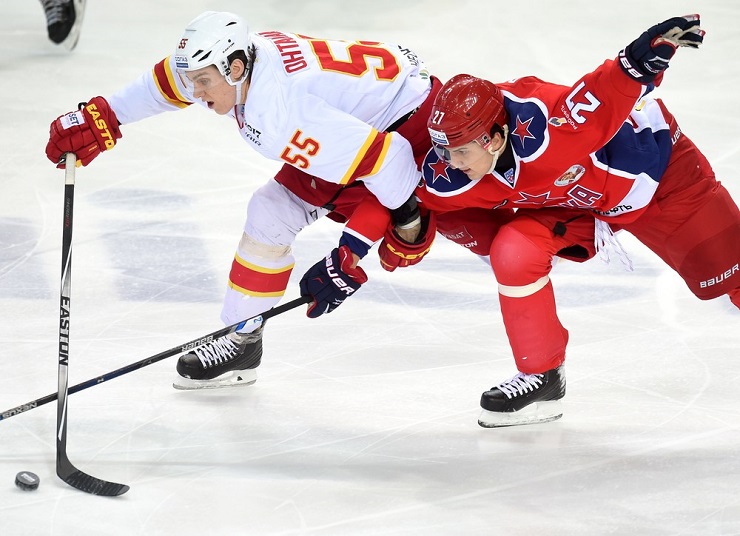 Slovan closing in on play-off spot

Slovan tightened its grip on a play-off spot in the Eastern Conference thanks to a 3-2 win in Novokuznetsk. That result, coupled with Medvescak’s heavy loss at Sibir, gives the Slovaks a six-point cushion in eighth place. Dinamo Minsk moves into eighth following its shoot-out win over Spartak.

Slovan led three times at Metallurg, but had to wait until Tomas Kundracek’s 58th-minute goal to secure a vital win. Earlier Andrej Stastny put the visitor in front after 10 minutes but Robert Kousal levelled early in the second period. Ziga Jeglic then made it 2-1 only for Ignat Zemchenko to send the teams into the second interval all square. But Kundracek’s power play goal proved decisive and lifted Slovan to 82 points.

Medvescak had a miserable evening in Novosibirsk, suffering a crushing 0-6 defeat. Things started badly for the Croatians when Maxim Shalunov gave Sibir the lead in the fourth minute, but Medvescak responded strongly, outshooting the host 18-10 in the first stanza but failing to beat Alexander Salak. Three goals in the second period sealed the deal for Sibir, though: David Ullstrom scored early on before Georgy Misharin and Ivan Vereshchagin both found the net in the 39th minute. Stepan Sannikov and Alexei Yakovlev completed the scoring, while Salak finished with 35 saves. 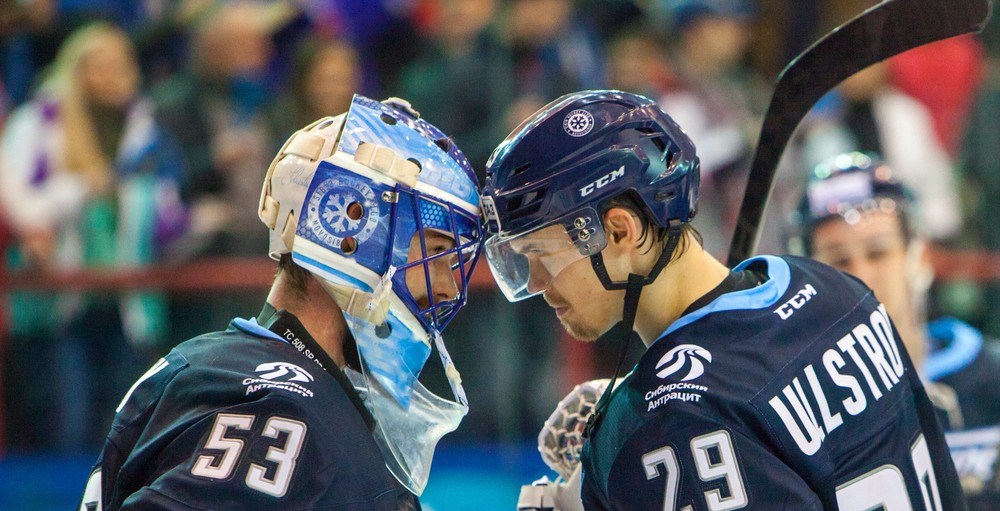 Dinamo Minsk trailed to a Konstantin Glazachev goal until deep into the third period before Alexei Kalyuzhny saved the game in regulation. In the shoot-out Matt Ellison twice beat Denis Sinyagin to lead the Belarusians to victory.

Victory in Ufa lifted Neftekhimik into eighth place in the Eastern Conference – at least until Avtomobilist plays at Ugra on Saturday.

Neftekhimik knew that any kind of victory would inch it into the play-off places: going into the game just two points separated three teams on either side of the dotted line. And the team from Tatarstan got off to a great start when Bogdan Yakimov opened the scoring in the fourth minute off a Dan Sexton assist.

Salavat Yulaev, whose recent lackluster form suggests a team already focussing on post-season, tied the scores through Maxim Mayorov midway through the game and the scores remained locked at 1-1 until the end. In overtime, though, Teemu Hartikainen gave away a penalty shot for a foul on Sexton and the American converted the chance to win the game
.

For the past three games Ak Bars lost out in shoot-outs – but here last year’s Gagarin Cup finalist couldn’t even get as far as overtime.

Two goals apiece for Ilya Krikunov and Andre Petersson paced HC Sochi to a 6-2 win in Kazan, tightening the Black Sea team’s grip on a play-off spot and giving it every chance of securing home-ice advantage at the start of the play-offs.

Ben Maxwell and Andrei Kostitsyn were the other scorers for Sochi, while Roman Abrosimov and Mattias Sjogren were on target for the home team.

This latest defeat could leave Ak Bars with a nervous glance over the shoulder as it seeks to protect a five-point cushion over ninth-placed Avtomobilist. Avto has six games left; Ak Bars just five to go.

Lokomotiv kept pace with KHL leader CSKA thanks to a victory at Lada. The visitor took control of the game in the first period thanks to goals from Andrei Sigaryov and Alexander Polunin, and that advantage remained throughout the game.

Lada did close the gap early in the second period thanks to Stanislav Bocharov but Kirill Kapustin scored his second of the season soon after to make it 3-1.

Subsequently the teams traded further markers with Viktor Komarov getting one on the power play for Lada before Danil Romantsev’s first of the season completed Loko’s win. 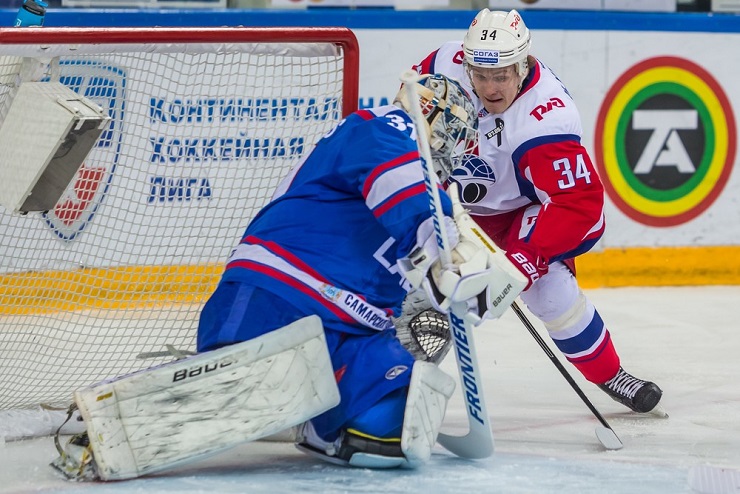 Ansel Galimov scored his first goal since Oct. 28 to help Dynamo Moscow to a 5-2 win at Amur. Galimov scored Dynamo’s third on the night, snapping a 2-2 tie and setting up the visitor for victory. Penalty trouble hurt Amur early on, with Dmitry Vishnevsky and Alexander Osipov both scoring power play goals before Galimov also cashed in on a man advantage. Artyom Fyodorov and Konstantin Gorovikov got Dynamo’s other goals; Akim Aliu and Vyacheslav Litovchenko scored for Amur.

It took a shoot-out to settle the South Urals derby after Traktor and Metallurg Magnitogorsk tied 3-3 in Chelyabinsk. Traktor opened up a 2-0 lead through first-period goals from Alexander Sharov and Alexei Kruchinin, but two markers from Yaroslav Kosov cancelled out that advantage. Alexei Petrov made it 3-2 to Traktor early in the third before Wojtek Wolski scored in the 47th minute to take the game into overtime. Danis Zaripov was the only player to score in the shoot-out as Magnitka claimed the victory.

SKA overpowered sorry Severstal as the Steelmen’s old boys came back to haunt their former club. Anatoly Nikontsev gave the visitor a surprise lead in St. Petersburg but it didn’t take long for ex-Cherepovets graduate Vadim Shipachyov to tie the game. Power play goals from Steve Moses and Evgeny Dadonov made it 3-1 at the first interval before a more recent recruit from Severstal, Pavel Buchnevich, added two more on either side of a marker from Ilya Kovalchuk to complete a 6-1 win.

Admiral trailed 2-0 and 3-2 at home to Vityaz, but ended up winning in a shoot-out after a 3-3 tie. Jonathan Blum was the key man, scoring in regulation, assisting on Dmitry Lugin’s third-period equalizer and potting the winning shot post-game.