Neftekhimik gained ground in the race to secure a play-off spot, claiming an impressive victory at Eastern Conference leader Avangard to close to within one point of eighth-placed Avtomobilist.

Just two points separate three teams at the sharp end of the battle for a top-eight finish in the East. Avto dropped one point in an overtime win over Salavat Yulaev, while Barys remains one point further ahead thanks to a shoot-out success at home to Traktor.

Neftekhimik took control of its game in Omsk early on. Igor Polygalov opened the scoring in the ninth minute and American forward Dan Sexton got just his second goal of the season to double the lead on a power play midway through the second period. Valentin Pyanov gave Avangard hope early in the third, but Kirill Lyamin made it 3-1 before Sexton assisted on Mikhail Zhukov’s 52nd-minute marker to complete a convincing win. Avangard, previously unbeaten in six, has now lost two on the spin. 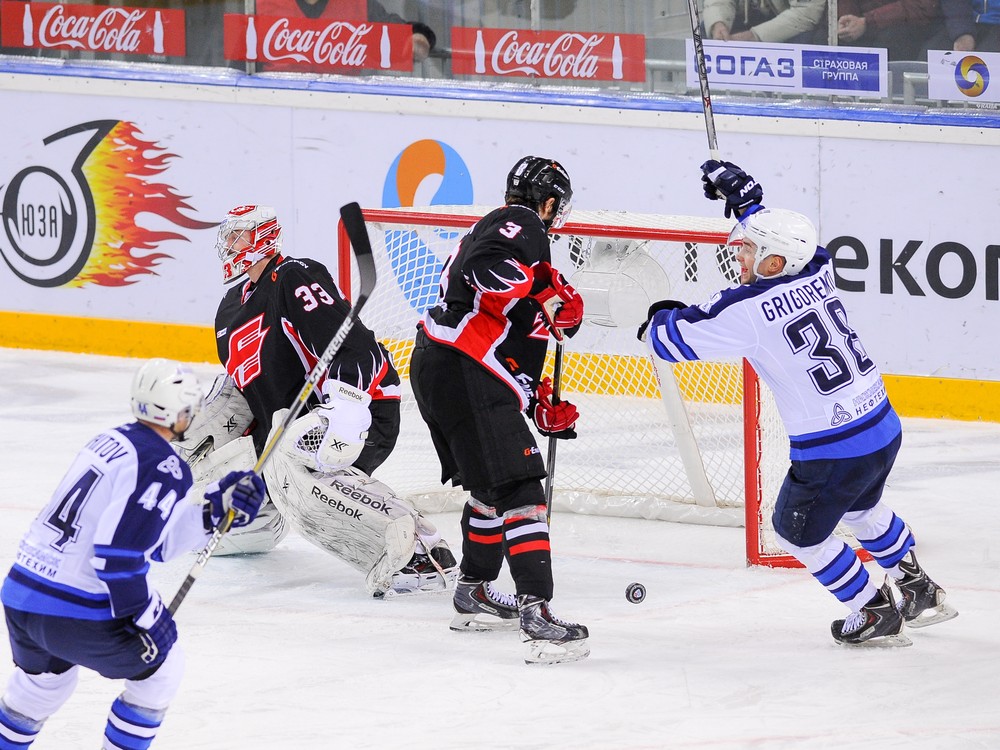 Avtomobilist is still hanging on to a play-off spot thanks to a hard-fought victory at home to Salavat Yulaev. Anatoly Golyshev’s 25th of the season finally separated the teams after a 2-2 tie. Roman Derlyuk and Igor Grigorenko scored for Salavat either side of goals from Avto’s Vitaly Popov and Alexei Mikhnov. 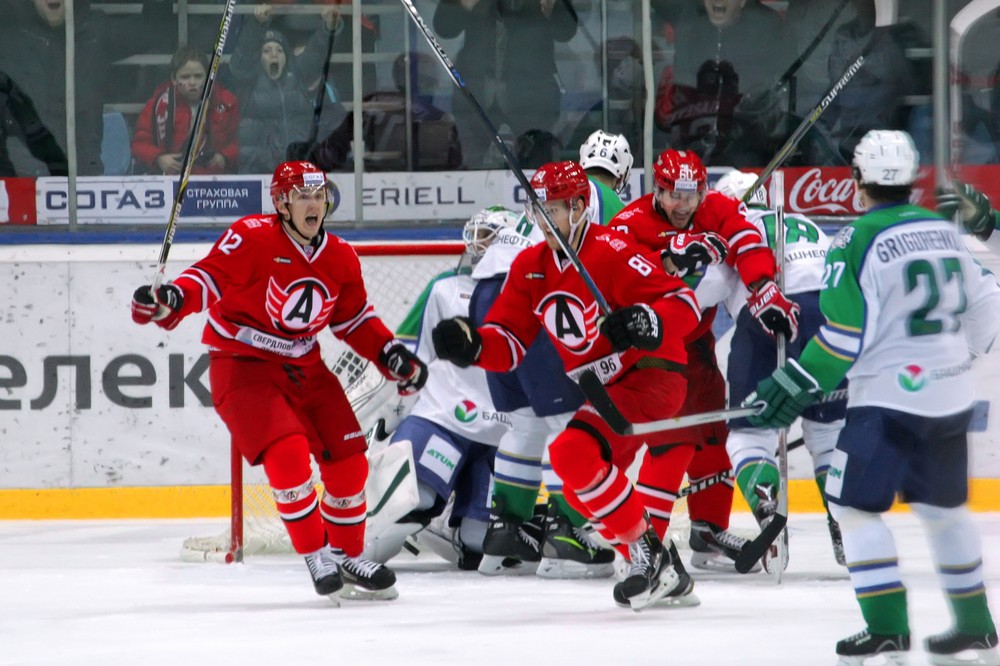 Barys remains seventh, but weather a 52-second goal blitz before sinking Traktor in a shoot-out. The Kazakhs led 3-1 at the first intermission, but goals from Anton Glinkin (22:00), Martin Ruzicka (22:20) and Maxim Yakutsenya (22:52) turned the game upside down and saw Jan Laco chased to the bench. Dustin Boyd tied it at 4-4 midway through the third period and Mike Lundin got the winner while replacement goalie Pavel Poluektov made 30 saves.

CSKA made it nine wins in a row with an emphatic victory in Latvia. Another powerful performance from the Army Men’s offense left Dinamo reeling, while rock solid defense delivered a fifth shut-out in those nine games.

It took some time to break through the home team’s lines, however. The opening period was goalless and it wasn’t until the 28th minute that CSKA took the lead. The scorer was young Ivan Telegin, who picked up his seventh point of the season. A power play goal for Kirill Petrov doubled the lead in the 30th minute and from that point on there was no looking back.

The third period saw Igor Makarov, Dmitry Kugryshev and Gennady Stolyarov find the net while Ilya Sorokin finished with 20 saves for his 10th shut-out of the season.

SKA suffered a third defeat in a row as Dinamo Minsk kept its play-off hopes alive with a narrow win.

A rare start for young Petersburg goalie Igor Shestyorkin didn’t go entirely according to plan as Dinamo scored two in the first 10 minutes. Jonathan Cheechoo opened the scoring on the power play before veteran Alexei Kalyuzhny doubled the lead.

Cheechoo made it 3-0 late in the second frame but Nikita Gusev got one back for SKA almost immediately. The final stanza was completely one-sided: SKA outshot the host 24-2 but found Jeff Glass in fantastic form. Vadim Shipachyov finally beat the Canadian in the 59th minute but it proved too little, too late.

Ak Bars found the net at last but could not escape a third successive shoot-out defeat, this time at the hands of Lokomotiv.

The Kazan team lost its two previous games after 0-0 stalemates over 65 minutes but when a long-awaited goal arrived in open play it went the way of the visitor. Denis Mosalyov put Loko in front in the eighth minute. Almost immediately, though, Loko got a penalty and Oscar Moller converted the power play to level the scores.

Early in the second session Andrei Ivanov put Ak Bars ahead, only for Yegor Averin to tie it up at 2-2 in the 34th. Then it was back to solid goaltending of recent games as the rest of the game, plus overtime, went goalless.

In the shoot-out Ivanov and Andrei Loktionov traded goals at the start before another extended display of the mastery of Stanislav Galimov and Alexei Murygin prolonged the deadlock. Finally Staffan Kronwall won it for Loko, which remains third in the West. Ak Bars stays in sixth in the East.

Torpedo unleashed a tornado on Spartak at the start of the teams’ meeting, firing home five unanswered goals in the first 12 minutes. Dmitry Semin got things going in the fifth minute, then two from Carter Ashton and one each for Linus Videll and Yury Sergiyenko left Spartak reeling. Semin added his second in the middle session and Kirill Koltsov completed Torpedo’s haul in a 7-2 win.

Sibir got back to winning ways after two defeats thanks to a 5-2 victory over Vityaz. The teams were tied in the opening session before Sergei Shumakov and Vladimir Butuzov gave the home team a 3-1 lead. Alexei Makeyev kept Vityaz interested but late goals from Shumakov and Oleg Gubin ensured the points stayed in Novosibirsk.

Igor Bortnikov finished with 2+1 as Ugra won 4-2 at home to Metallurg Magnitogorsk. Sergei Mozyakin struck twice for the visitor, taking his goal tally to 31 for the season, but Bortnikov claimed the assist on Konstantin Panov’s equalizer for Ugra before scoring two of his own to lead his team to victory. Evgeny Lapenkov was the other scorer.

A power play goal from Peter Regin gave Jokerit a 2-1 win at Severstal with just 10 seconds left to play. Regin snapped a 1-1 tie that had lasted since the seventh minute, when Tim Kennedy cancelled out Vadim Berdnikov’s opener.

Dynamo Moscow powered to a 4-1 win at Metallurg Novokuznetsk, despite conceding a first-period goal to Alexander Komaristy. Mat Robinson tied the scores in the second before Maxim Pestushko got what proved to be the game-winner. Andrei Alexeyev’s first ever KHL goal made it 3-1 and another youngster, Artyom Fyodorov, completed the scoring.

HC Sochi recovered an early deficit to win 3-1 at Lada. Anton Shenfeld gave the host a fifth-minute lead, but second-period goals from Evgeny Skachkov and Denis Kazionov turned the game around. Igor Ignatushkin completed the scoring in the third.