Sibir ended a three-game losing streak – but had to work hard to see off Spartak.

Arriving in Moscow on the back of losses to Magnitka and Jokerit, the Siberians were 2-0 down early in the third period as Igor Radulov scored a short-handed goal and Pavel Valentenko converted a power play to put Spartak in charge.

But penalty trouble for the home team allowed Sibir to respond with quick goals from Stepan Sannikov and Maxim Shalunov.

The middle session was goalless, but there was more drama to come in the third. Vyacheslav Butuzov’s 57th-minute marker looked to have won it for Sibir, only for Casey Wellman to tie the scores with just seven seconds left. That didn’t save Spartak, though: Shalunov settled the shoot-out in the visitor’s favor. 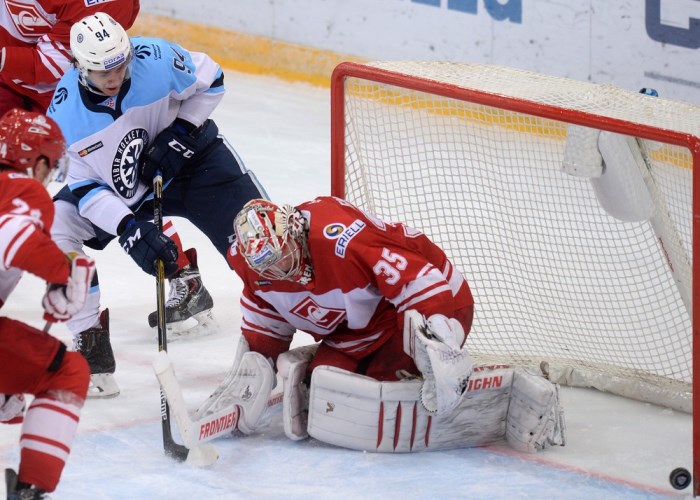 Ilya Kovalchuk, Vadim Shipachyov and Evgeny Dadonov were the architects of a powerful offense as SKA overwhelmed Metallurg Novokuznetsk.

The 4-0 scoreline barely did justice to the opportunities the home team created, and only the excellence of Metallurg goalie Vladislav Podyapolsky prevented an even more lopsided result. Podyapolsky made 39 saves on a busy night; his opposite number Mikko Koskinen faced just 20 shots for his shut-out.

But the game was decided by the brilliance of SKA’s top line. The first period brought the trio one goal apiece, as well as two assists each for Shipachyov and Dadonov. Kovi scored his second of the night in the middle session, with a third assist from Shipachyov, before the final stanza was goalless. 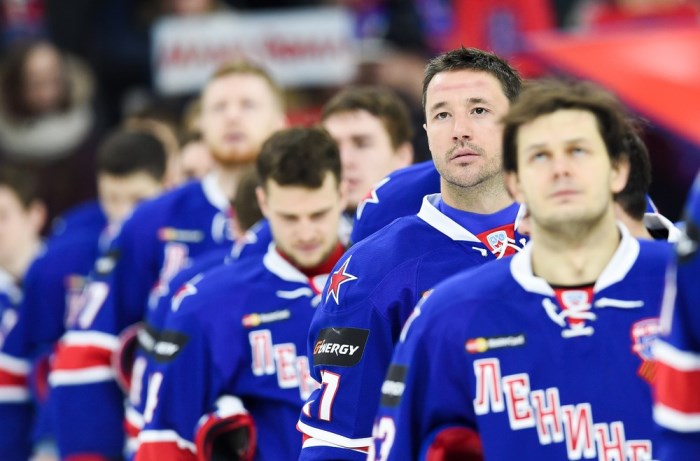 Jokerit made it three wins from three against Admiral as the Vladivostok team suffered its third loss in a row.

The home team got rolling midway through the first period with a power play goal from Juhamatti Aaltonen and doubled the lead when Tomi Maki scored only his second goal in two KHL seasons.

A defensive error from Atte Ohtamaa gave Maxim Mamin the chance to halve the deficit but Jere Sallinen quickly reinstated the two-goal cushion.

Jokerit pushed for more goals but was left with an anxious finish after Mamin scored his second of the night for Admiral.

Vasily Demchenko made 31 saves as Traktor edged a 1-0 win at Salavat Yulaev. Alexei Kruchinin got the only goal in the 51st minute. That was the youngster’s second in successive games. 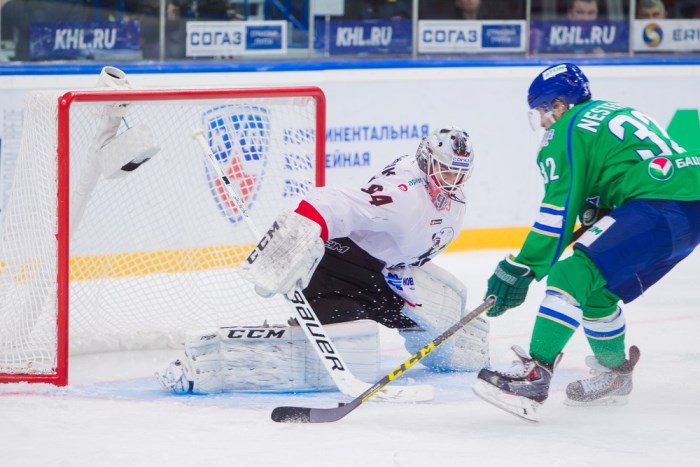 Justin Azevedo hit a hat-trick as Ak Bars beat Lada 5-3. Azevedo got the first, third and fifth goals for his team a Fyodor Malykhin and Mikhail Varnakov helped him open up a 4-0 lead by the 35th minute. Lada rallied with goals either side of the second intermission from Viktor Komarov and Vasily Streltsov before Azevedo snuffed out the recovery. Alexander Bumagin got a late consolation goal on the power play.

Vityaz tasted victory for the first time since December 24 when it’s 4-3 win over HC Sochi snapped an eight-game losing streak. Mario Kempe’s goal in the 57th minute separated the teams, but only after Sochi had clawed back a 1-3 deficit with goals from Ilya Krikunov and Mikhail Anisin.

Evgeny Grachyov’s 54th-minute goal made the difference in Amur’s 2-1 win at Dinamo Riga. Earlier Kaspars Saulietis gave Dinamo a first-period lead but Alexei Byvaltsev tied it up in the second.