Anatoly Golyshev was the star as Avtomobilist picked up a valuable win over Metallurg Magnitogorsk.

The visitor, still missing captain Sergei Mozyakin through injury, scored first through Viktor Antipin in the eighth minute, but Golyshev set up the equalizer for Petr Koukal right at the start of the second period. Eero Elo put the home side in front, but goals from Tomas Filippi and another for Antipin gave Magnitka the lead once again before Golyshev and Koukal combined to tie it up going into the third.

Two quickfire goals from Golyshev early in the final stanza proved decisive: Metallurg could find no response and Artyom Gareyev wrapped it up late on. Golyshev moves on to 24 goals for the season; Avto are back in the play-off spots. 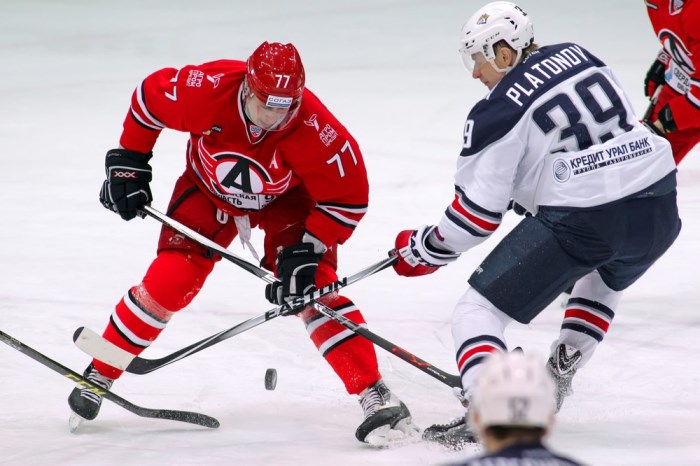 A dramatic third-period revival – spearheaded by Dynamo’s crop of young players – saw the Blue-and-Whites turn a 0-2 deficit into victory in Slovakia.

Artyom Fyodorov, 22, had two assists as Alexei Tsvetkov and Alexander Osipov scored on either side of the second intermission to tie the scores after Ziga Jeglic and Lukas Kaspar gave Slovan the lead in the first period.

Then Ilya Shipov scored for the second game in a row to put Dynamo in front before 20-year-old Ivan Igumnov got the game-winner, scoring for the second time in his debut season at this level.

Slovan got one back through Michal Sersen but could not force overtime.

Yet another shut-out for Alexei Murygin – his 13th of the season – helped Lokomotiv to a 1-0 victory at Severstal.

Murygin made 18 saves while his opposite number Roman Smiryagin was rather busier against the second-placed team.

But it took a power play goal in the 53rd minute to give Loko the points. Daniil Apalkov broke the deadlock and kept the Railwaymen one point behind CSKA at the top of the table.