League leader CSKA stretched its winning streak to four games and became the first team to officially book a play-off spot with a comfortable 3-0 success at Traktor.

Vladimir Zharkov opened the scoring in the eighth minute, getting onto the rebound after Andrei Svetlakov’s shot was blocked by Vasily Demchenko.

Then the CSKA switched roles: Zharkov’s rush and pass setting up Svetlakov to score at the second attempt in the 28 minute.

Finally Zharkov got his second of the night just before the second intermission, touching home Artyom Blazhievsky’s slapper from the blue line.

Viktor Fasth made 16 saves for his shut-out.

Loko keeps pace at the summit

Lokomotiv remained hard on the heels of CSKA thanks to a home win over Barys, but despite the comfortable final scoreline it took time to take control of the game.

There was no scoring until Sergei Konkov broke the deadlock in the 31st minute and the game remained in the balance until deep into the final session. Then Denis Mosalyov and Yegor Averin found the net in the space of 38 seconds to give Loko a commanding advantage.

Barys got one back through Brandon Bochenski, but any prospect of a grandstand finish was snuffed out by Andrei Loktionov’s empty-netter.

Avto got a vital win to kickstart its play-off hopes and – hopefully – banish the memory of a wretched run of form.

Victories had been so infrequent over the past couple of months that the Ural team even took the rare step of giving the head coach a day off, only to see the team lose in his absence. But in Kazan, finally, things picked up.

Avto had to do it the hard way, though, giving up an early goal to Dmitry Arkhipov. But in the second period Vitaly Popov tied the scores and exactly 60 seconds later Ondrej Roman got the go-ahead goal. Igor Ustinsky finished with 27 saves as the scoreline remained 2-1 until the end.

The visitor is still four points adrift of the play-off spots, while Ak Bars is down in sixth place in the East, an unusually low position for last season’s beaten Gagarin Cup finalist.

A goal from Anton Belov with 20 seconds left to play halted a big Bratislava fightback and gave SKA a slender home victory.

The Slovaks had clawed back a two-goal deficit thanks to third-period goals from Tomas Kundratek and Michal Sersen, and looked to be heading for overtime in a bid to extend a seven-game winning that had lifted the team into the play-off spots.

But Belov’s last-gasp strike sent Milos Riha’s team away with nothing for the first time this year. Earlier Vadim Shipachyov and Evgeny Dadonov both had a goal and an assist as SKA opened up a 2-0 lead in the first two periods.

No Sergei Mozyakin? No problem. Metallurg Magnitogorsk continued its winning streak despite the absence of its captain. Danis Zaripov opened the scoring at home to Dinamo Minsk but the Belarusians equalized through Evgeny Lisovets’ second of the season right before the first intermission.

The second period was also tight until Alexander Semin made it 2-1 right before the hooter. That effectively ended the game as a contest.

Denis Platonov extended the lead early in the third, Pavel Medvedev cashed in on a defensive blunder to get his first of the season and Chris Lee wrapped up a convincing win late on.

Medvescak boosted its play-off push with a 4-1 win at Spartak. Mike Glumac opened the scoring in the third minute but Spartak tied the game at the start of the second period through Lukas Radil. That sparked the visitor into life: Finns Tuukka Mantyla and Jesse Saarinen scored in the 24th minute and Mantyla made it four in the 29th. Medvescak is now two points behind eighth-placed Slovan. 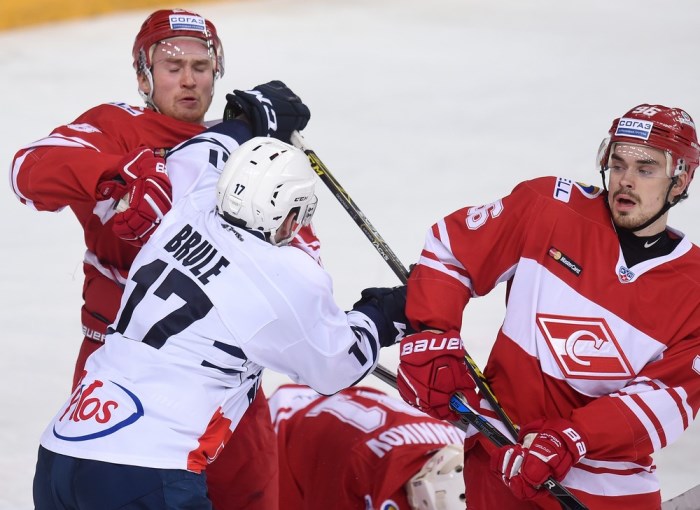 Avangard extended its lead in the Eastern Conference after coming from behind to win 2-1 at Dinamo Riga. Edgars Kulda put the Latvians ahead in the first period but Avangard turned it around in the middle session. Goals from Anton Burdasov and Pyotr Khokhryakov settled the issue.

Torpedo enjoyed a 3-1 win at Salavat Yulaev. Stanislav Yegorshev opened the scoring and Dmitry Semin made it 2-0 before Nikolai Prokhorkin’s 17th goal of the season put the home team back in contention. However, Kaspars Daugavins scored in the 56th minute to ensure the points went to Nizhny Novgorod. 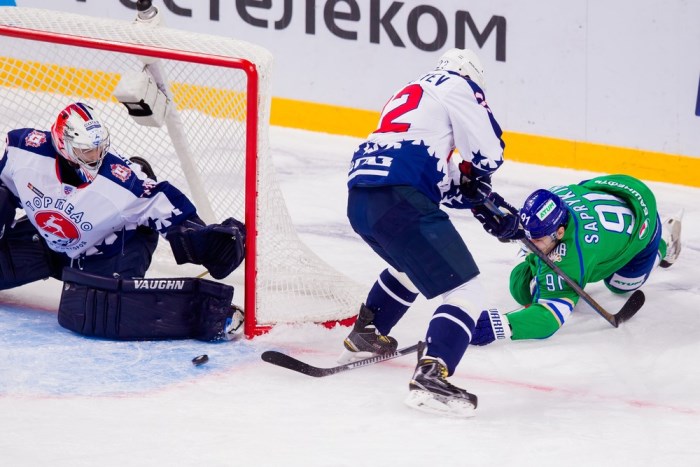 Neftekhimik won 3-0 at home to Severstal, thanks largely to two goals in the 14th minute. Igor Volkov opened the scoring and just 14 seconds later Igor Polygalov made it 2-0. Andrei Sergeyev got the third on a power play midway through the second period. Ivan Lisutin made 26 saves.

Lada enjoyed a handsome 5-2 win at home to Ugra, despite giving up a goal after just 11 seconds. Dmitry Vorobyov cancelled out Igor Bortnikov’s early opener. Vorobyov added a second in the middle stanza, helping his team to a 3-1 lead while Alexander Bumagin also scored twice for Lada.