Through the 100 barrier. January 11 round-up

Two teams crashed through the 100-point barrier on Monday as the battle at the top of the table intensifies.

CSKA was the first to bring up its century, thanks to a shoot-out win at Avtomobilist. The home team, suffering a wretched run of form, took the lead against the league leader in the 14th minute through Vitaly Popov. That joy was short-lived, though: Roman Lyubimov tied it up just 15 seconds later.

It stayed 1-1 until the end, with both defenses dominant, and in the shoot-out Lyubimov delivered the knock-out blow.

A point dropped for CSKA gave Lokomotiv the chance to close the gap at the top of the table to a single point when the Railwaymen faced off against Torpedo.

For two periods the game was goalless, with Torpedo perhaps shading the balance of play. But in the third Loko’s offense began to click. Yegor Averin made the key breakthrough on the power play in the 43rd minute and Denis Mosalyov doubled the lead soon after. An empty-net goal for Dmitry Maltsev completed the win and lifted Loko to 100 points. Alexei Murygin made 27 saves for his latest shut-out.

The early stages were all about the home team: Jarno Koskiranta scored twice to put SKA in control after two periods.

But then it all changed. Medvescak hit back with two goals in two minutes from Andreas Jamtin and Gilbert Brule. Moses put SKA back ahead but Tomas Mertl tied it up once more on the power play with nine minutes left.

However, a penalty against the Croatians proved costly, with Moses snatching the game winner as Alexandre Bolduc sat out a tripping call. Alexander Kadeikin added an empty-net strike to secure the victory.

Avangard increases lead in the East

Avangard tightened its grip on top spot in the East with a convincing win at Ak Bars. A goal in each period made the difference here as the Siberians extended their advantage over Sibir to four points.

Andrei Pervyshin opened the scoring in the 13th minute and Ilya Mikheyev doubled the lead right after the first intermission. At the other end, Avangard’s defense was doing a fine job of limiting Ak Bars’ scoring opportunities and Dominik Furch was in fine form, eventually making 24 saves for his shut-out. Pyotr Khokhryakov completed the scoring with an empty-net goal.

A Nigel Dawes hat trick powered Barys to a valuable 4-1 victory at Lada and keep the Kazakhs on track for a play-off place. Dawes needed just 30 seconds to open the scoring, but Dmitry Vorobyov tied it up midway through the first period. Dawes also started the second period brightly, scoring in the 22nd minute, before assisting on Brandon Bochenski’s 41st minute goal to make it 3-1. Dawes then wrapped up a star performance with the fourth goal in the 44th minute. 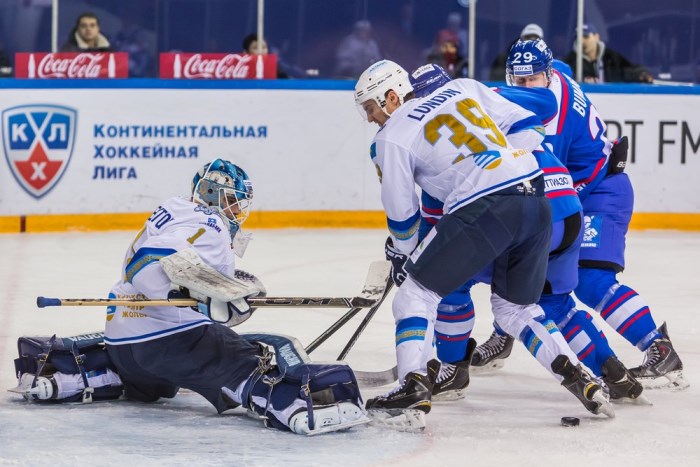 Milos Riha enjoyed his return to Sokolniki, leading Slovan to a 4-0 win over Spartak. The popular former coach of the Red-and-Whites saw Vaclav Nedorost and Lukas Kaspar get his team off to a good start with a 2-0 first-period lead. Andrej Stastny added a third before Kaspar’s second of the night wrapped up the scoring. 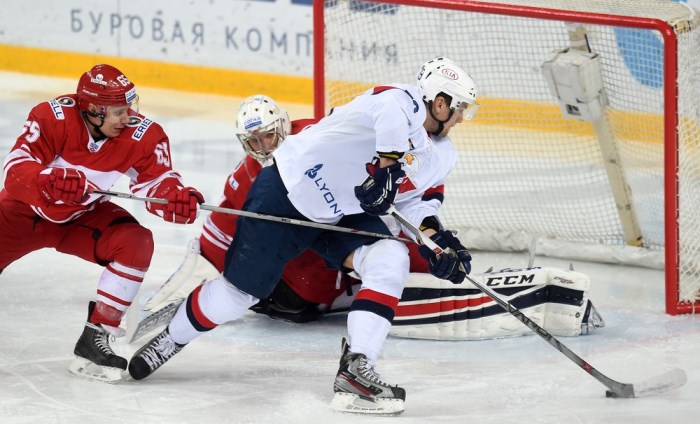 Former Ugra forward Igor Skorokhodov fired his new team, Severstal, to a 2-1 win in Khanty-Mansiysk. Skorokhodov sank his old club with a 44th-minute goal. Earlier Dmitry Kagarlitsky put Severstal ahead only for Evgeny Lapenkov to equalize in the second period.