Avtomobilist’s directors made an unusual decision in response to a run of eight losses in 10 games – they made head coach Andrei Razin a ‘healthy scratch’ for one game.

Club president Alexei Bobrov explained that there was no plan to dismiss Razin, but that he felt it was a good idea for the coaching staff to take a time out and let Dmitry Popov prepare the team for the visit of Severstal.

The plan misfired, though. Avto stuttered to yet another defeat against the Western Conference struggler, and suffered another blow in its bid to make the play-offs. The opening goal came in the 13th minute when Anton Sizov fired right under the cross bar. The video officials confirmed that the puck did indeed cross the line, and Severstal went in front.

Avtomobilist had slightly the better of a goalless middle period, raising hopes that the battle may not be in vain. But penalty trouble at the start of the third disrupted the game and Severstal took advantage when Ondrej Nemec scored during a 4-on-3 power play to double the visitor’s lead.

The home side refused to give up and finally got the puck in the net after pulling goalie Jakub Kovar late on. But the effort was propelled by hand and did not count. Visiting netminder Roman Smiryagin ended with a shut-out and 29 saves as the win went to Severstal. For coach Razin and president Bobrov there is plenty to ponder as the team’s poor streak continues.

Avangard back on top in the East

The yo-yo battle for leadership of Eastern Conference swung back in Avangard’s favor with a 2-0 win at Lada.

Avangard took the lead in the second period when Martin Erat broke the deadlock on the power play. After a patient build-up, the Czech international spotted his opportunity to rush into the face-off circle and release a wrist shot that ripped between Edgars Masalskis and his near post.

The second goal came late on as Ilya Mikheyev found the empty net, while Denis Kostin’s 17 saves earned him a shut-out. 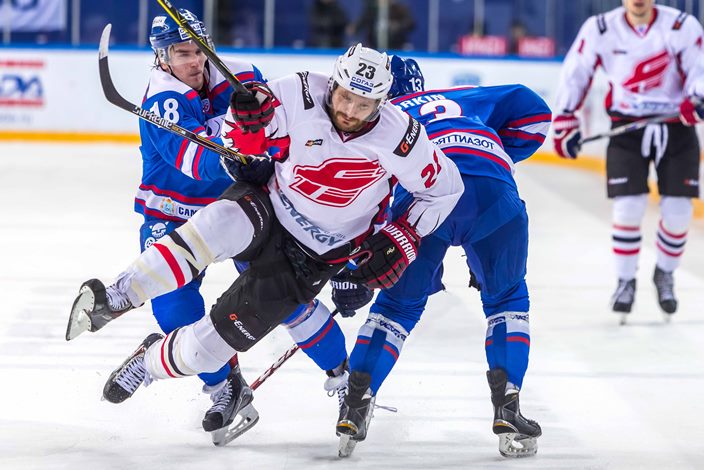