CSKA gets back on top. January 8 round-up

A big victory over Lokomotiv added some extra zest to CSKA’s build-up for this latest Army Derby. Wednesday’s win got Dmitry Kvartalnov’s team back to its best and served a reminder that the Blue-and-Whites would not be relinquishing last year’s regular season championship without a struggle.

And Friday’s clash of the champions saw a packed house brave the winter chill to witness the visit of Gagarin Cup holder SKA in one of those juddering showdowns that peppers the KHL season.

At first it was the visitor that looked the stronger. Goals from Alexander Kadeikin and Nikita Gusev opened up a 2-0 lead in the first period.

But two days ago SKA had clawed back that kind of margin to win 4-2 at Vityaz: today it was the Petersburg team’s turn to suffer the same fate. Alexander Radulov, ever a talismanic figure, began the revival in the 22nd minute before Igor Makarov got his first of the season to tie the scores in the 29th.

Bogdan Kiselevich got the eventual game-winner right at the start of the third and Dmitry Kugryshev added a fourth exactly one minute later to give CSKA a cushion it would not relinquish.

More satisfying than the result alone, though, the scorers indicated how much strength in depth Kvartalnov can call upon this season. Aside from Makarov’s first goal of the campaign, there were rare points for youngsters Andrei Svetlakov and Artyom Sergeyev, fringe frontmen Evgeny Korotkov and Kirill Petrov, and defenseman Mikhail Naumenkov. 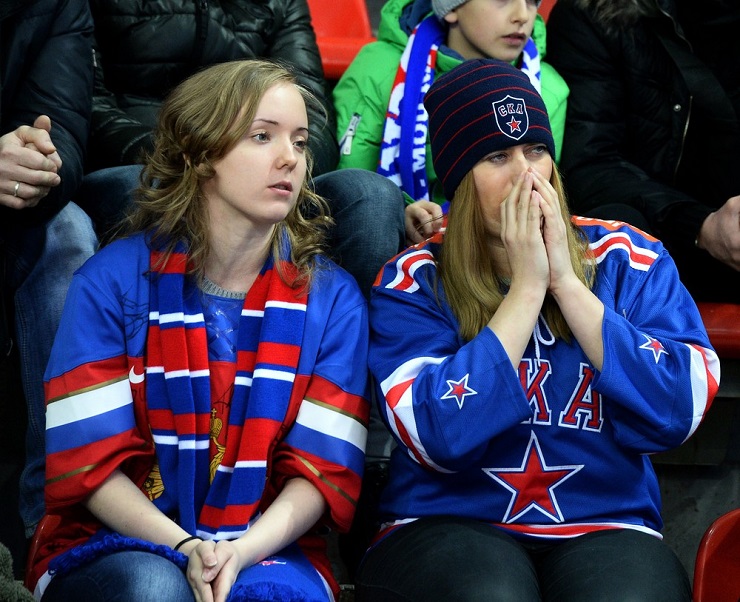 Lokomotiv has been the shut-out king this season – but suddenly the tables are turned. Alexei Kudashov’s team failed to score in its last two games, dropping from the top of the table as a result.

After a heavy defeat at CSKA last time out, the trip to Minsk was rather more competitive. Just one goal separated the teams and that came in the 46th minute when Alexander Pavlovich finally broke the deadlock. Loko’s defense was back to its usual parsimonious ways, allowing just 20 shots on Vitaly Kolesnik’s net, but Pavlovich made one of them count. At the other end Kevin Lalande had 31 saves for his shut-out, helping his former club march past Loko at the top of the table.

Second win for Oreshkin at Dynamo

Dynamo Moscow made it two wins from two after dismissing head coach Harijs Vitolins – but the Blue-and-Whites left it late to save the game in Finland under interim chief Sergei Oreshkin.

Jokerit led 2-1 thanks to Tim Kennedy’s goal late in the second period and the clock was running down. Juuso Heitanen, Dynamo’s first goalscorer, twice went close as the visitor withdrew the goalie in a last desperate bid to salvage something. But then, with just 17 seconds left, Ilya Nikulin did what he’s famous for. The defenseman has been scoring last-gasp goals throughout his career, and his shot from the blue line bobbled through a series of ricochets to beat Henrik Karlsson.

That took the game to a shoot-out where Heitanen overcame his compatriots. The defenseman also scored a power play goal midway through the encounter to cancel out Jesse Joensuu’s opener.

Sibir edges back in front

For the second game running, Salavat Yulaev lost out after a 4-4 tie. At Sibir the visitor led for much of the game, but was ultimately undone by Sergei Shumakov in a shoot-out.

Early on, things were going well for Salavat. Nikolai Prokhorkin, fresh from a hat-trick at Amur, got on the mark in the first period alongside Alexander Loginov, helping the men in green into a 2-0 lead.

Maxim Shalunov and Vladimir Butuzov tied that up in the latter stages of the middle session, but Salavat went back ahead on a Linus Omark goal early in the third. This time, though, Sibir was ready: Viktor Bobrov and Vitaly Menshikov responded quickly to give the host the lead for the first time. Igor Grigorenko tied it up once more on the power play, but the extras went Sibir’s way.

The Metallurg derby served up 10 goals, with the team from Magnitogorsk claiming the verdict 7-3. But in the first period it was goaltending that caught the eye: Magnitka’s Vasily Koshechkin made 17 saves to keep Novokuznetsk at bay. That resilience helped Tomas Filippi, Alexander Semin and Artyom Zhelezkov open up a 3-0 lead for the visitor after 40 minutes. The lead soon doubled in the third period, with Filippi on target for the second time that night and Rafael Batyrshin scoring his first of the season. Kuznya hit back, finding three goals of its own starting with World Junior silver medallist Kirill Kaprizov getting his 10th of the season, but Evgeny Timkin wrapped it up with an empty netter late on.

Torpedo thumped Sochi 5-1 in the battle for the fourth seeded spot in the Western Conference. Carl Klingberg and Artyom Alyayev gave the home team an early 2-0 lead and although Clay Wilson pulled one back for Sochi, Carter Ashton made it 3-1 before the first intermission. Kaspars Daugavins added a fourth and finished the game with 1+2 after assisting on Alexander Frolov’s goal to wrap things up.

Spartak came from behind to win 2-1 at Medvescak. Thomas Larkin gave the Croatians the lead but Matthew Gilroy levelled on the power play five seconds before the first intermission. Another Medvescak penalty saw Lukas Radil put Spartak in front midway through the second, and that’s how it stayed until the end.

Amur wasted little time in seizing control of its game with Traktor. Tomas Zohorna opened the scoring after 39 seconds and added a second in the 14th minute to make the score 4-0. Alexei Byvaltsev added a fifth early in the middle session and although Traktor found three goals in reply it could not recover the deficit.