Loko’s march to the KHL summit came to an abrupt halt in this trip to its closest rival, CSKA. Victory would have seen Alexei Kudashov’s team bring up 100 points for the season, and open up a seven-point gap at the top of the table, but Dmitry Kvartalnov’s team had other ideas.

After the frustrations of a 2-1 defeat at home to Sochi last time out, CSKA made a compelling start here. Antti Pihlstrom opened the scoring in the third minute, his first goal of a frustrating season since moving from Salavat Yulaev. Mikhail Naumenkov got his first assist of the season on the same play.

Geoff Platt doubled the lead on the power play before Dmitry Kugryshev made it 3-0 going into the first intermission. Platt then completed the scoring when he claimed his 20th goal of the season in the 39th minute; CSKA reduced Loko’s lead to a single point. 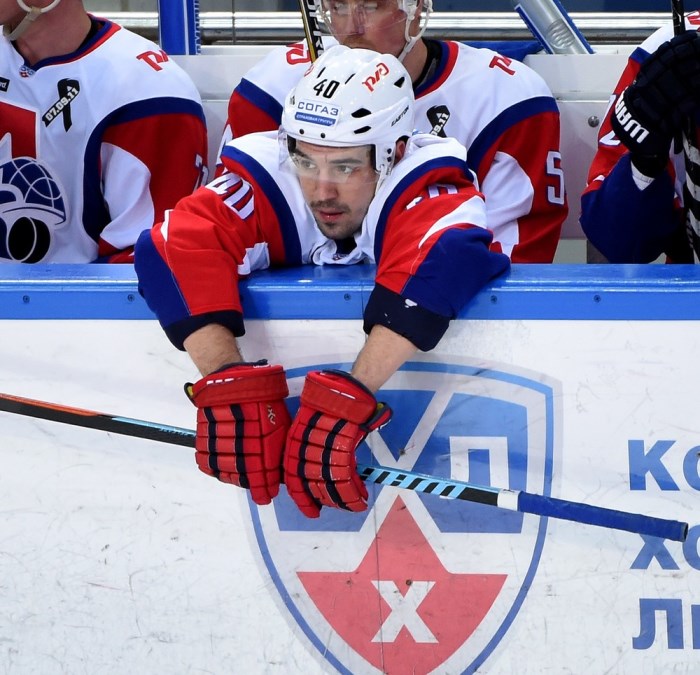 Sibir opened up a three-point lead over Avangard at the top of the Eastern Conference – but left it very late to snatch victory over Neftekhimik.

The first two periods were goalless before Viktor Bobrov finally broke the deadlock in the 44th minute. Sibir’s lead lasted less than a minute, though, before Evgeny Grigorenko tied the scores.

Overtime was looming and Ivan Lisutin’s 34 saves seemed to have done enough to earn Neftekhimik at least one point. But with just 17 seconds left Maxim Shalunov’s 10th goal of the season gave Sibir the verdict.

The team from the Far East had been goal-shy in recent games, but rediscovered its scoring touch in a roller-coaster second period here before eventually snatching the points deep into the extras when Vladislav Ushenin got the game winner.

The first period was the calm before the storm: Nikolai Prokhorkin put Salavat ahead before Niklas Bergfors equalized. Those two would go on to dominate the scoring, with the Swede getting his second of the night in the 21st minute to kickstart the madness. Prokhorkin tied the game at 2-2 before Rinat Ibragimov and Jan Kolar lifted Amur to a 4-2 lead. Prokhorkin then turned provider, assisting as Teemu Hartikainen halved the deficit just before the second intermission.

The scoring procession seemed set to continue as that man Prokhorkin completed his hat-trick in the 42nd minute, but that was the last goal in the 60 minutes. It took until 4:37 in overtime before Ushenin finally settled the outcome.

HC Sochi’s impressive recent form has lifted the team to fourth following a win at CSKA last time out, but the Black Sea outfit’s progress was stalled at lowly Severstal.

The visitor managed to take a solitary point from a shoot-out defeat, but left it late to salvage something in regulation. Pavel Chernov gave Severstal the lead in the sixth minute and Igor Skorokhodov doubled the advantage early in the middle session.

Sochi eventually found its game in the third period: goals from Dmitry Kazionov and Clay Wilson in the last six minutes levelled the scores and set up overtime. But Severstal would not be denied and Chernov settled it in the shoot-out.

The battle for eighth place in the Western Conference is turning into a two-way scrap between the KHL’s Western-most representatives. Slovan, on 70 points, has a two-point advantage over Medvescak after both teams picked up big wins on Wednesday.

Slovan was in action first, entertaining Jokerit. The game was nip and tuck until the closing stages, with Slovan twice getting ahead through Vaclav Nedorost and Rok Ticar, only for Topi Jaakola and Daine Todd to bring Jokerit level.

The decisive breakthrough came in the 47th minute when Nedorost’s second of the game put Slovan 3-2 up. This time Jokerit had no answer and Nedorost completed a good night for him and his team by assisting Lukas Kaspar’s empty-netter to complete the scoring.

Medvescak had a more comfortable evening in Latvia. Stefano Giliati opened the scoring in the first period and Thomas Larkin extended the lead in the second. Gints Meija got one back for Dinamo early in the third but things unravelled for the host shortly afterwards. Tuukka Mantyla made it 3-1 before a quick-fire salvo from Gilbert Brule and Radek Smolenak put the visitor in complete control. Filipp Toluzakov’s late goal was little consolation for the Latvians.

SKA came from 0-2 down to win at Vityaz. Vyacheslav Solodukhin scored twice for the home team in the first period but the middle session saw Steve Moses and Evgeny Dadonov tie the scores. Vadim Shipachyov got the game-winner in the 51st minute before Sergei Shirokov scored his first for his new employer to wrap up a 4-2 verdict.

Nikolai Zherdev got his first goal for Torpedo and went on to grab a shoot-out winner at home to Ak Bars. Zherdev struck in the 56th minute to start a late revival just as the visitor seemed set to leave with the points. Kirill Koltsov finished the job, tying the scores at 2-2 in the 59th minute and reprieving Torpedo. Earlier goals from Vladimir Tkachyov and Oscar Moller gave Ak Bars a 2-0 lead.

Two goals from Konstantin Makarov and 22 saves from Igor Bobkov earned Admiral a 2-0 victory at home to Metallurg Magnitogorsk.

A flurry of goals early in the third period helped Traktor to a 3-2 win at Metallurg Novokuznetsk. The teams were locked at 1-1 after 40 minutes of play when Fyodor Polishchuk gave Kuznya the lead in the 43rd minute. But it didn’t take long for Traktor to respond: Filip Novak tied it up before Vyacheslav Osnovin got the winner on 44:57.

Georgy Belousov earned Lada a shoot-out win following a 2-2 draw at Dinamo Minsk. The home team led twice through goals from Evgeny Lisovets and Jonathan Cheechoo; Lada hit back thanks to Viktor Komarov and Igor Magogin.