A new year, a new head coach on the way … and possibly a new lift for Dynamo’s fortunes. The Blue-and-Whites ended 2015 in a sorry state, with five defeats from six games pushing the team down to seventh in the Western Conference.

That spelled the end for Harijs Vitolins behind the bench, and Sergei Oreshkin was called up as a stand-in replacement ahead of SKA’s visit. By the end of an emphatic win, he may have gone a long way towards earning a full-time promotion from second-tier VHL hockey to a shot at the big league.

At first it seemed like more of the same: Dynamo went behind after just two minutes as Dinar Khafizullin scored his first of the season.

But Dynamo, in front of a 10,000-strong crowd, rallied. Juuso Heitanen tied it up on the power play late in the first period, the Finnish defenseman getting his seventh goal of the season. Another prolific blue-liner, Mat Robinson, took his tally to 12 in the 36th minute, extending the lead that young forward Vladimir Bryukvin had given the team shortly after the restart.

The third period brought further joy: 19-year-old Ivan Igumnov, who worked with Oreshkin at the Dynamo Balashikha farm team earlier this season, scored his first ever KHL goal before Robinson got his second of the night wrap up an emphatic win.

There was just one blot on a night of redemption for Dynamo. In the dying seconds there was uproar as Dmitry Yudin kneed Alexei Tereshchenko. The Petersburg defenseman got a 5+20 penalty; Dynamo adds yet another name to a long injury list. 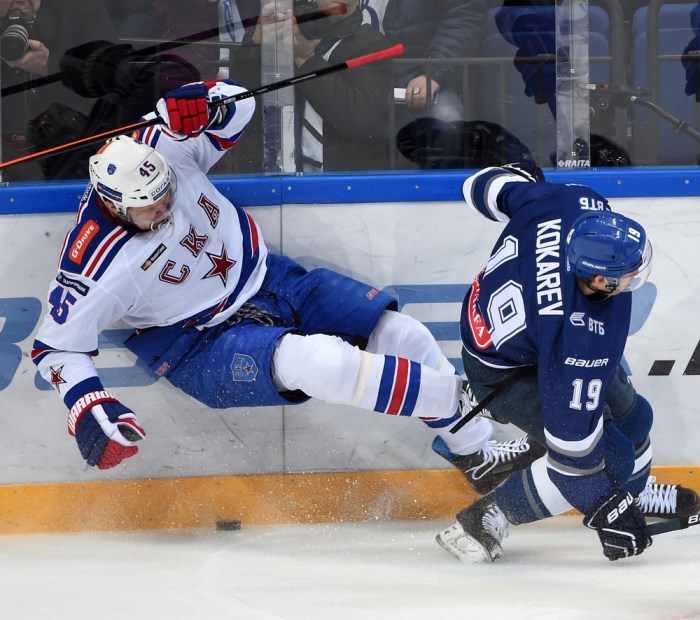 After inching into pole position just before the New Year, Loko consolidated top spot thanks to a narrow win at Severstal. Second-placed CSKA, meanwhile, was left fuming after losing out at home to HC Sochi.

Loko made a slow start to its game against the Western Conference struggler. Yury Trubachyov got the only goal of the opening stanza to shunt the Railwaymen off course. But the second period turned the game around: goals from Andrei Loktionov and Petri Kontiola gave the visitor the lead and with the defense allowing just 17 shots on Alexei Murygin all night, it was always going to be a big ask for Severstal to recover.

In Moscow, meanwhile, CSKA coach Dmitry Kvartalnov was left bemoaning his team’s lackluster performance after Andre Petersson’s late goal gave Sochi a 2-1 win. The Army Men struggled to get their game going against a Sochi team that has been something of a dark horse in the West this season. Andrei Kostitsyn gave the visitor the lead in the 21st minute and despite a Jan Mursak equalizer, Sochi took the points after the video official gave Petersson’s marker the all clear.

Leader Sibir too strong for Traktor

In the Eastern Conference Sibir maintained its leading position thanks to a strong finish against Traktor. Third-period goals from Sergei Shumakov and Damir Zhafyarov settled this one.

Earlier the home team got in front right at the start of the second period when Alexei Kopeikin beat Vasily Demchenko. But Traktor was a resilient opponent throughout, and Maxim Yakutsenya tied the scores going into the second intermission.

Admiral began the New Year with an eye on the chance to pressure third-placed Avangard. Victory over Salavat Yulaev would have taken the Sailors to within a point of the Omsk team, but the visitor arrived knowing a win would lift it above its opponent.

That proved to be the stronger motivation: inside 14 minutes it was 3-0 to the away team. Artyom Chernov and Andreas Engqvist scored within 60 seconds of each other in the fifth and sixth minutes before Engqvist set Igor Grigorenko on his way to a shorthanded goal on 13:12. That saw the end of home goalie Ivan Nalimov and the rest of the encounter was more competitive. Viktor Alexandrov and Yegor Dugin both scored for Admiral in the second half of the game, but in between Zakhar Arzamastsev made it four for Salavat.

Amur’s game against Metallurg Magnitogorsk turned into a goaltending duel. Alexander Pechursky made 37 saves for the host, but was beaten by Chris Lee’s game winner in the 35th minute. That was the only goal of the game: Vasily Koshechkin turned away 33 shots from Amur.

Ryan Gunderson gave Dinamo Minsk an early lead at home to Ak Bars, but the visitor eventually skated to a 4-2 win. Albert Yarullin quickly equalized in Belarus before Vasily Tokranov and Oscar Moller made it 3-1 early in the second period. Matt Ellison halved the lead only for Artyom Lukoyanov to make the points safe in the last minute.

Mikhail Zhukov got the overtime winner for Neftekhimik after a 1-1 tie at Metallurg Novokuznetsk. Kuznya led through Daniil Yerdakov’s second-period marker, but Igor Polygalov tied it up early in the third.

There was another 1-1 tie in Riga before Slovan’s Ziga Jeglic won it in a shoot-out. Pavol Skalicki gave Slovan the lead in the first period, Tim Sestito levelled the scores in the second.