In support of Kanareikin. December 30 round-up

The game between Vityaz and Spartak was overshadowed by news that Spartak legend Fyodor Kanareikin was in urgent need of surgery after being diagnosed with cancer. In support of a man who helped Spartak win the Soviet championship as a player and who returned to Sokolniki to coach the team, money raised from Wednesday night’s game was donated to a fund to support Kanareikin.

And on the ice the teams did their bit, serving up an absorbing game of hockey that ended in a Spartak win. Although the final margin was a comfortable one, the outcome was always in doubt until the closing stages. Vityaz took the lead through Roman Horak in the 12th minute, but Spartak turned it around on a power play goal from Sergei Shmelyov and a short-handed marker from Vyacheslav Leshchenko. Yury Koksharov tied it up in the 20th minute.

In the second stanza Charles Genoway put Spartak 3-2 up but Koksharov got his second of the night to level the scores once more. However, Shmelyov’s second goal right before the second intermission gave the Red-and-Whites an advantage that they would not relinquish.

Vityaz tried to find a way back in the third, but Alexander Vasilyev made it 5-3 for Spartak in the 52nd minute and Alexander Mereskin’s empty-netter completed the win. 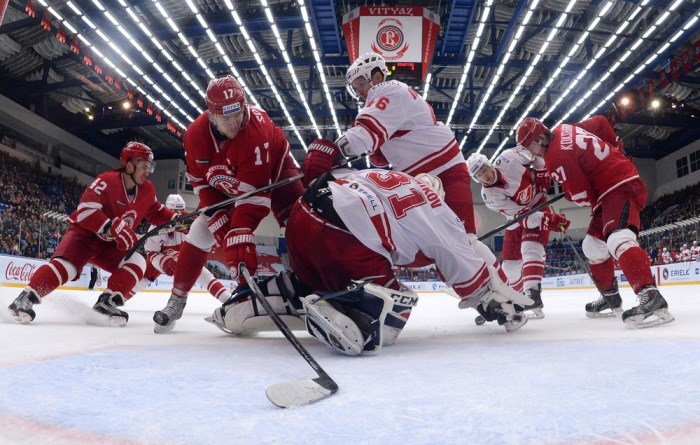 Slovan earned its second shoot-out win in succession, edging Traktor after a 1-1 tie. Lukas Kaspar got the decider following first period goals from Martin Ruzicka and Francis Pare. The latter scored against the Traktor team where he began this season.

Medvescak’s 4-2 win at Neftekhimik completed a good day for away teams. Third-period goals from Edwin Hedberg and Tomas Mertl snapped a 2-2 tie to give the Croatians the points. Earlier Neftekhimik led twice on goals from Nikita Shchitov and Igor Polygalov; Simon Gysbers and Colby Genoway replied for Medvescak.