Wojtek Wolski was the architect of Metallurg’s win at home to Dynamo. The forward had a hand in both his team’s goals, opening the scoring after just 12 seconds of play, before assisting on Danis Zaripov’s game-winner in the 47th minute.

Dynamo tied the game with Vladimir Bryukvin’s goal midway through the first period but was unable to escape a fifth defeat in six games, a run that has seen one of the traditional favorites in the Western Conference slip down into midtable. The Blue-and-Whites currently lie in seventh place and could be drawn into a battle to clinch a play-off place.

Magnitka, meanwhile, holds second place in the Eastern Conference by virtue of topping its division. 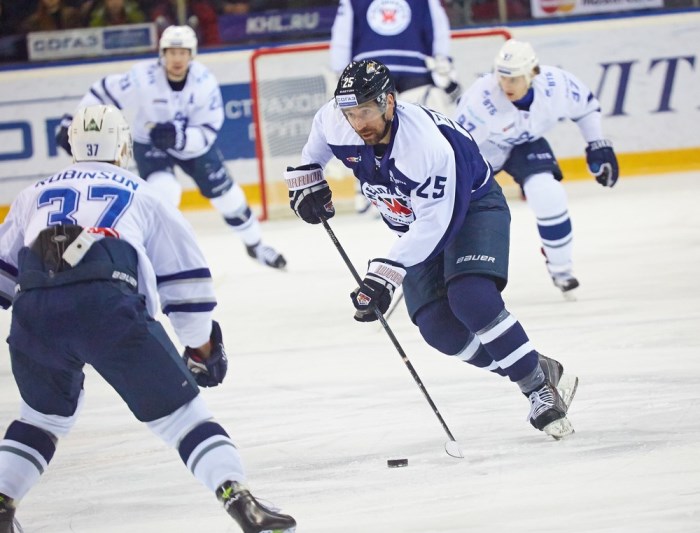 Thirty-two saves from Niklas Svedberg and a freakish empty-net goal from Alexander Loginov helped Salavat Yulaev to victory over Vityaz.

Loginov’s moment came in the last minute as Vityaz, on the power play, launched a last, desperate attempt to salvage something from the game. The home defenseman got the puck in his own zone, fired it against the boards and watched as it flew the length of the ice and into the unguarded net to make it 3-0.

Earlier second-period goals from Zakhar Arzamastsev and Maxim Mayorov, both assisted by Teemu Hartikainen, put Salavat in control after a scoreless opening stanza.

Torpedo back up to fourth

Torpedo’s comfortable win in Latvia returns Peteris Skudra’s team to a seeded position in the play-off race, lifting it ahead of HC Sochi into fourth place.

It didn’t take the visitor long to assume control: Alexander Frolov opened the scoring in the fifth minute and Artyom Alyayev added a second in the 18th.

That was all the scoring for a long period, but a final flurry of goal action saw Maxim Osipov make it 3-0 before Gunars Skvorcovs got the home team on the scoresheet at last. Dmitry Semin added to his earlier assists to complete the scoring, while Latvian international Kaspars Daugavins claimed two assists on his latest trip home.

Maxim Yakutsenya’s shoot-out winner gave Traktor the verdict over Medvescak following a 1-1 tie. Deron Quint opened the scoring here in the eighth minute but the Croatian team claimed a point thanks to Tuukka Mantyla’s 56th-minute equalizer. 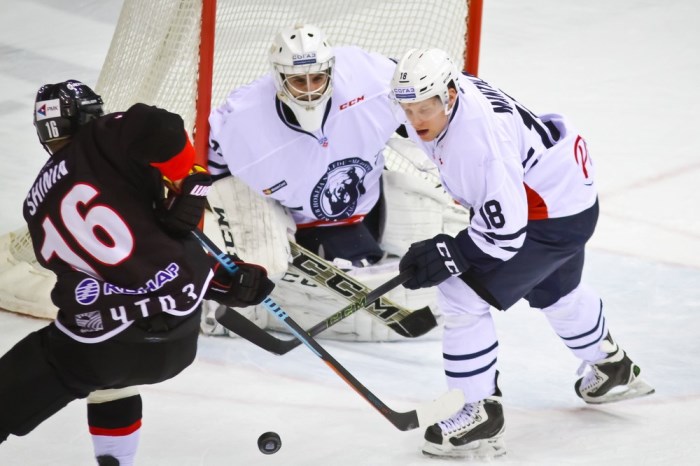 Goalies Alexander Sudnitsin and Barry Brust were on top form as Neftekhimik met Slovan. The teams failed to score in regulation, with Sudnitsin denying Slovan 40 times and Brust turning away 27 shots on his net. Overtime did not produce a single shot on goal, meaning Ziga Jeglic finally decided it in Slovan’s favor after a prolonged shoot-out.