KHL leader CSKA suffered a surprise defeat against lowly Lada. The visitor is languishing near the foot of the Eastern Conference table, but found top gear to frustrate the Army Men.

Goalie Ivan Kasutin played a huge role in the win: he turned away 34 shots to defuse CSKA’s potent offense. At the other end, Lada created few clear scoring opportunities but still found a way to score on Ilya Sorokin twice: Alexander Bolshakov broke the deadlock in the seventh minute, only for an Alexander Radulov power play goal to restore parity two minutes later.

If that seemed to pave the way for a routine home win, Kasutin had other ideas. He continued to impress to ensure the scores remained level at the first intermission, and the middle stanza saw Lada have its best offensive play of the game, outshooting CSKA and grabbing the only goal of the period when Martin Zatovic found the net in the 39th minute.

The final act belonged once again to Kasutin: CSKA led the shot count 11-4, but found no way past the goalie as Lada snatched a valuable win. 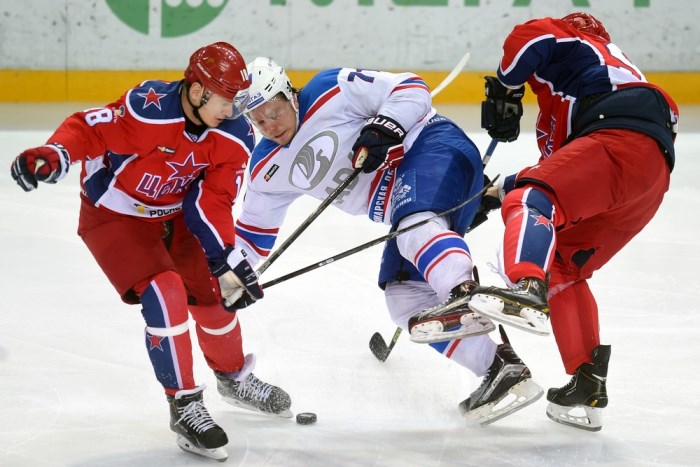 Yet another Alexei Murygin shut-out backstopped Lokomotiv to a 3-0 win over Admiral. The goalie made 21 saves to record his 10th blank of a record-breaking season and help Loko close the gap on CSKA at the top of the KHL table to two points.

Andrei Loktionov opened the scoring in the 15th minute, converting Staffan Kronwall’s inch-perfect pass to the slot as the home team dominated the first period.

But it wasn’t until the second that Loko really assumed control of the game. Stanislav Chistov’s 26th-minute goal and Vladislav Gavrikov’s marker in the 39th minute stretched the lead to 3-0 and gave Admiral too much to do to save the game.

In the third period there were relatively few scoring chances but the closing stages were enlivened by a fight between Ilya Lyubushkin of Lokomotiv and Admiral’s David Booth: the former was ejected from the game for his contribution to the skirmish. 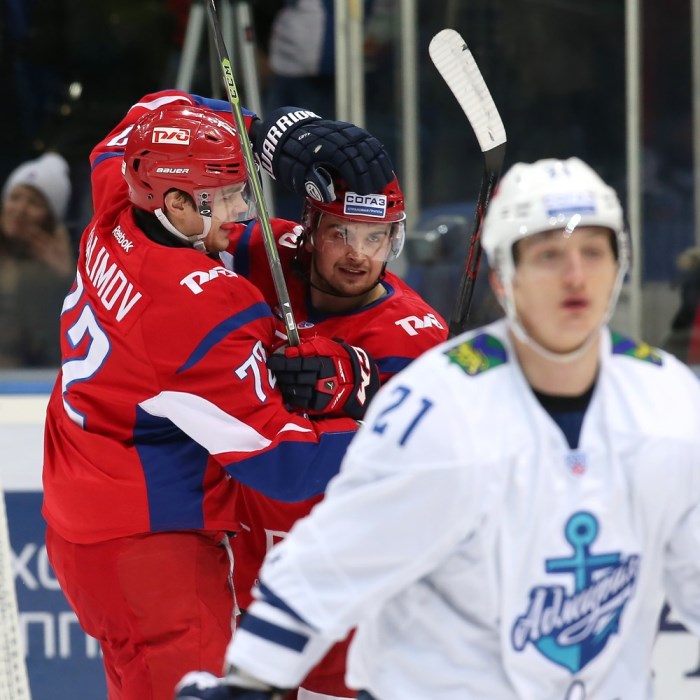 Vasily Tokranov scored his first KHL goal since the 2010-11 season to give Ak Bars an overtime win after a 3-3 tie at Severstal. The defenseman struck on the power play three minutes into the extras to get the visitor back to winning ways after Wednesday’s defeat at CSKA. Earlier Severstal rocked Ak Bars with two goals in a minute at the start of the game as Nikolai Kazakovtsev and Anatoly Nikontsev made it 2-0 to the host. But Ak Bars rallied strongly as Alexander Svitov, Justin Azevedo and Mikhail Varnakov turned the scoreline around to give the visitor a 3-2 advantage by the halfway point. Maxim Trunyov tied it up in the 34th minute, but after a goal-rich start to the game the remaining action went scoreless.

HC Sochi recovered from a poor first period to beat Amur 6-4. Ben Maxwell put the home team ahead, but Amur recovered to lead 3-1 on goals from Vyacheslav Ushenin, Vitaly Shulakov and Mikhail Zheleznov. Ziyat Paigin pulled one back for Sochi before a goalless second period, but the final session saw the game turn around. Evgeny Skachkov, Andrei Kostitsyn and Mikhail Anisin scored in the space of eight minutes to give the home team a decisive lead.