Spartak saved itself from defeat in the most dramatic fashion, tying the scores at 2-2 with just 0.09 seconds left to play. Evgeny Bodrov got the vital goal, completing a strong performance in the third period and finally converting the home team’s pressure at the last possible moment. Then, after overtime failed to produce a result, Spartak went on to win the shoot-out with goals from Ivan Levitsky and Casey Wellman and two saves from Evgeny Ivannikov.

That late drama seemed a long way off when Magnitka raced into a 2-0 lead midway through the first period. Danis Zaripov converted the first power play of the game before Yaroslav Kosov doubled the advantage a minute later. Lukas Radil pulled one back for Spartak before the first intermission, but Vasily Kosechkin produced a fine display to frustrate the home forwards for much of the evening. 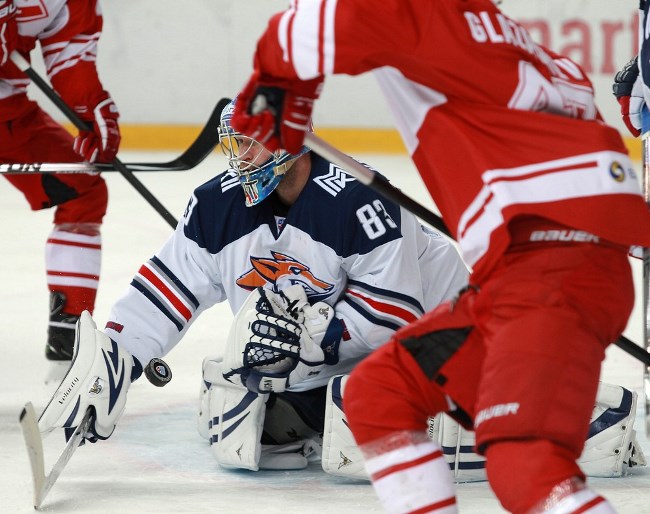 SKA was quick to lead Steve Moses back to his promised land in the KHL, and the league’s top striker last season repaid that faith with a goal on his debut in Petersburg.

Moses, who set a KHL record with his 36 goals last time around, belatedly opened his 2015-16 account with an empty net strike to wrap up this game and stretch SKA’s winning run to seven games.

But it took a third-period fightback, with Ilya Kovalchuk at the heart of it, to see off Salavat Yulaev. Kovi, who has now picked up points in nine games in a row, assisted on goals for Anton Burdasov and Alexei Kadeikin as SKA turned a 2-3 deficit into a 4-3 lead.

Earlier the home side eased into a 2-0 lead thanks to Andrei Kuteikin and Evgeny Dadonov. But Maxim Mayorov pulled one back in the first period and two goals late in the second saw Teemu Hartikainen and Igor Grigorenko put the visitor ahead. 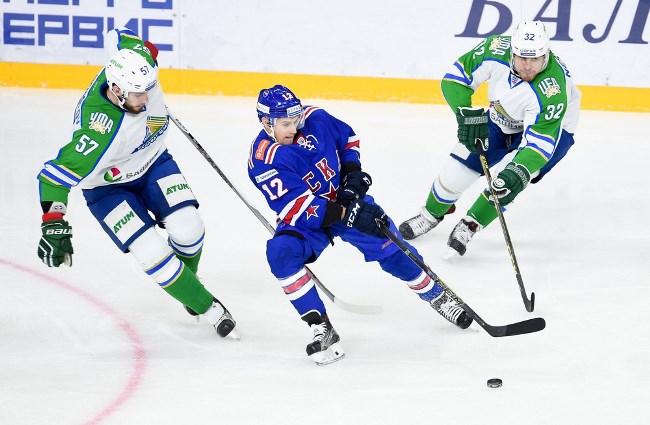 Geoff Platt came back to haunt his former club with two goals for CSKA against Dinamo Minsk. The naturalized Belarusian forward opened the scoring in the second minute and doubled the advantage late in the second period off an assist from Alexander Radulov.

Dinamo pulled a goal back with two minutes to play thanks to Jonathan Cheechoo, but Radulov made the points safe with an empty net goal.

Victory saw CSKA extend its lead over Lokomotiv after the Yaroslavl team dropped points in Zagreb.

A well-drilled display in Moscow saw Ak Bars move up to second place in the Eastern Conference, suggesting that Zinetula Bilyaletdinov’s team is beginning to settle into its usual formidable form.

The first period at the VTB Arena was typical Kazan: Dynamo had more of the play but struggled to carve out opportunities; Ak Bars struck midway through the session with an opportunist one-timer from Alexei Svitov.

The middle stanza saw Ak Bars extend its lead through Mattias Sjogren. That was more than enough for Dynamo, which saw Jussi Rynnas turn away 26 shots on his goal. 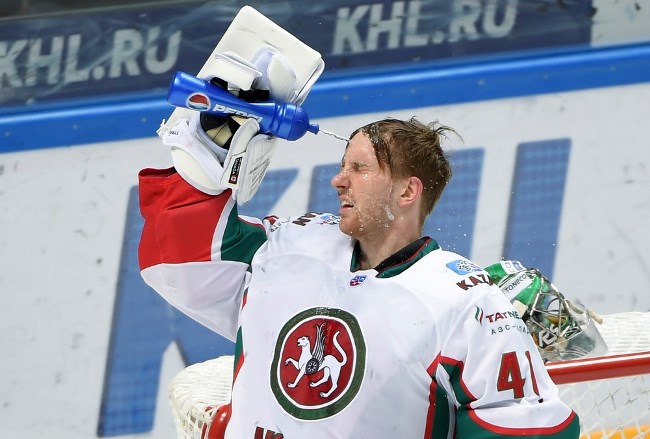 Lokomotiv needed overtime to edge a hard-fought game at Medvescak. After two goalless periods, Loko got in front thanks to Kirill Kapustin’s goal early in the third. Medvescak equalized soon afterwards through Jesse Saarinen and the game went to overtime before Pavel Koledov’s first goal of the season won it for the visitor.

Perseverance paid off for HC Sochi in a 5-4 win at Slovan. The team led twice in the second period, on goals from Igor Ignatushkin and Ben Maxwell, but was hauled back both times with goals from Lukas Kaspar and Marek Viedensky. Finally, though, Ilya Krikunov got the game-winner in the 48th minute.

Three goals in the first period lifted Torpedo past Severstal. Sergei Kostitsyn, Artyom Alyayev and Kaspars Daugavins got the goals. Severstal’s young forward Daniil Vovchenko got the consolation goal. All four goals were scored on the power play.

Edgars Masalskis made 31 saves to help Lada to a 2-0 win at Vityaz. The game was scoreless until the third period, when goals from Igor Magogin and Georgy Belousov wrapped up the win.