Sibir roars back to down Avto. December 8 round-up

Sibir rallied from two goals down to beat Avtomobilist and maintain top spot in the Eastern Conference.

The home team had temporarily dropped behind Avangard and looked to be in danger of relinquishing its lead when the visitor fired two quick goals early in the second stanza. Kirill Polozov and Artyom Gareyev hit the target.

But Sibir’s reply was even swifter: Sergei Shumakov and David Ullstrom netted within 90 seconds of each other to level the scores.

The game remained deadlocked until the 53rd minute when Oleg Gubin’s power play effort put Sibir up for the first time on the night. Shumakov scored his second into an empty net to complete the win, while Avto coach Andrei Razin was banished from the bench as his frustrations boiled over. 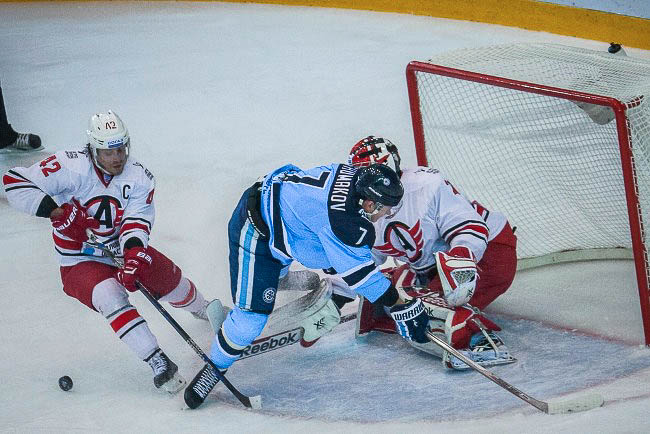 Another goal fest in Finland

For much of its KHL career, Jokerit has been an epitome of Finnish hockey: well-drilled, rigid in defense and reliant on a deadly counter-attacking game to bring it conspicuous success throughout its 18 months or so in the competition.

But sometimes Erkka Westerlund’s team dances to a different rhythm: the astonishing game against Dinamo Riga, where a five goal lead evaporated into a shoot-out defeat was one example; tonight’s clash with Neftekhimik was another 11-goal roller-coaster.

Jokerit delivered the expected home win in the end, but its success came after an almighty fright in yet another second-period slump. Neftekhimik rallied after conceding early, with Mikhail Zhukov cancelling out Eetu Poysti’s opener. Then two goals in a minute from Alexei Bondarev and Pavel Poryadkin put the visitor in control.

Jesper Jensen got one back, but sloppy defense invited Andrei Stas to reinstate Neftekhimik’s two-goal advantage and it could have been worse for the home team as Dan Sexton hit the post and Andrei Sergeyev was allowed plenty of time and space to test Henrik Karlsson from the blue line. Experienced forward Niko Kapanen eventually got the home team back into the game, scoring either side of the second intermission, and when Mathis Olimb made it 5-4 it seemed that, finally, normal service was resumed.

But Neftekhimik had other ideas, with Andrei Stas tying the game on his second of the night to take it to overtime. Philip Larsen finally delivered the points for Jokerit, scoring the game winner on 63:55 as the Hartwall Arena witnessed its second 6-5 game of the season.

A solitary goal from Michal Kempny was enough to keep Avangard on Sibir’s trail in the race for the Eastern Conference summit.

The Czech defenseman struck in the 36th minute, picking out a wrist shot from the left-hand circle to beat Igor Bobkov through traffic.

That was the only goal of the game: Admiral’s Bobkov made 26 saves, while his opposite number Dominik Furch turned away 21 efforts on his net. 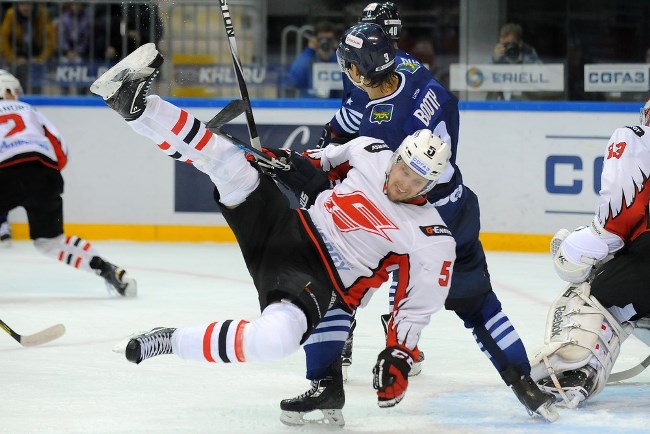 Ugra struck 14 seconds from the end to snatch a 3-2 victory at Metallurg Novokuznetsk. Denis Gorbunov got the winner on the power play as Cade Fairchild sat out a slashing call. Earlier Fairchild had tied the scores at 2-2, wiping out the 2-0 lead that Ugra gained in the first period through Mikhail Mamkin and Kirill Rasskazov.

An open game in Khabarovsk ended with Amur edging a 3-2 verdict over Barys. Goals from Denis Tolpeko, Vyacheslav Litovchenko and Vyacheslav Ushenin saw Amur over the line. Barys hit back thanks to Brandon Bochenski and Nigel Dawes.

In Riga, Semyon Afonasyevsky’s first ever KHL goal helped Traktor to a shoot-out win over Dinamo. Semyon Kokuyov got the visitor’s second; Guntis Galvins and Tim Sestito replied for Dinamo, taking the game to overtime at 2-2. Anton Glinkin settled the outcome in the visitor’s favor in the post-game shoot-out.