Valentin Pyanov, recently called up from Saryarka in the VHL, fired home two goals to open his KHL account for season as Avangard outscored Medvescak.

The 24-year-old forward opened the scoring after just 69 seconds and went on to add the game-winning fourth goal, while there was another prominent contribution from Alexander Chernikov, who also scored twice. Alexander Perezhogin had three assists for Avangard while the other home goals came from Jonas Ahnelov and Ilya Zubov.

At the other end Gilbert Brule was the cream of Medvescak’s forwards, potting two goals in a losing cause. Tomas Mertl also scored for the visitor.

Two goals from Vladislav Kartayev turned this game around and helped Lokomotiv draw level on points with CSKA at the top of the KHL table.

Severstal struck first late in the first period. Anatoly Nikontsev made an odd man rush and converted with aplomb past Vitaly Kolesnik.

But Kartayev got Loko back on track. He tied the game in the 39th minute, scoring on a power play. Then early in the third period, on a further power play after Andrei Shefer was expelled from the game for stickwork, Kartayev put Lokomotiv in front as he touched home a shot from Vladislav Gavrikov.

Jiri Novotny extended that lead in the 46th minute, completing the victory for the home team. 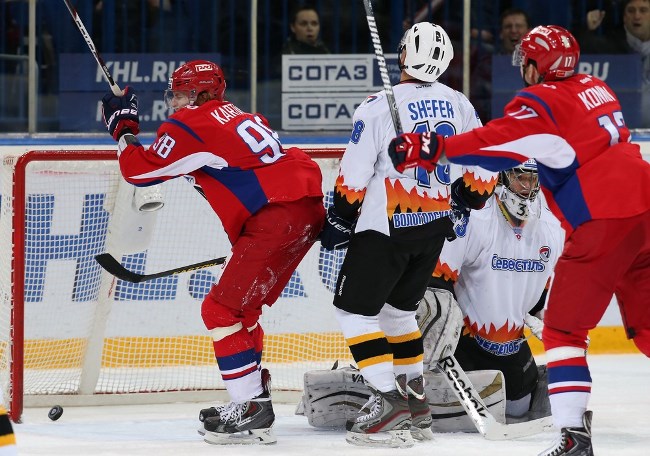 Alexander Svitov scored twice to lead Ak Bars to a 4-1 victory over Jokerit, avenging a defeat in Helsinki in the previous game on November 29.

For Jokerit, meanwhile, that hard-fought win has been followed by two losses – at home to Lada on Tuesday and again in Kazan tonight.

Svitov opened the scoring deep into an evenly-matched first period; Brandon Kozun tied it up early in the second. Then Albert Yarullin put Ak Bars back in front on the power play before Svitov’s second of the night, a short-handed effort, stretched the lead to 3-1. Mikhail Varnakov wrapped it up with an empty net goal. 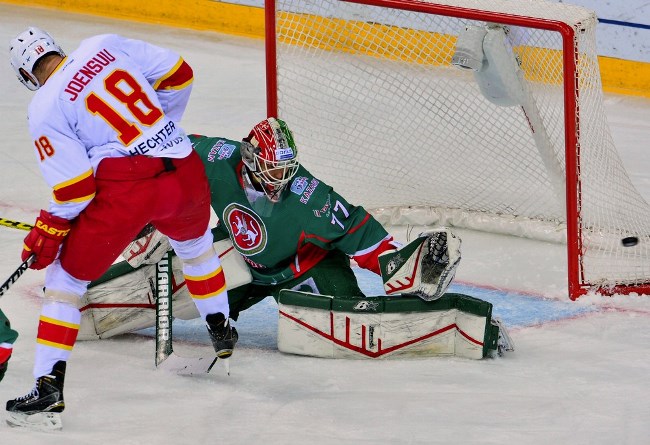 Maxim Khudyakov got the overtime winner for Barys after a 4-4 tie at home to Slovan. The early stages were full of action, with eight goals flying in after Ziga Jeglic gave the visitor a fourth-minute lead. But once Tomas Starosta tied the scores at 4-4 in the 39th minute there was no more scoring until overtime when Khudyakov got his second of the game on 63:55.

Guntis Glavins got the overtime winner as Dinamo Riga edged Sochi. The visitor won out after a 1-1 tie in regulation. Gunars Skvorcovs put Dinamo up early in the second but Denis Kazionov levelled in the 29th minute. 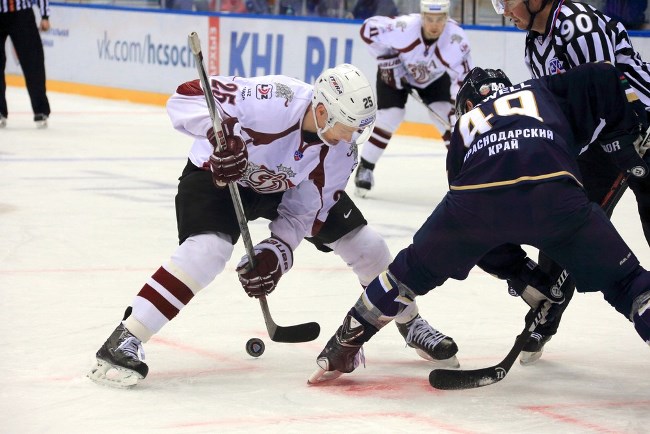