All five today’s games were East vs. West clashes and Eastern Conference representatives emerged victorious in all five.

The Latvian goaltender was given a thorough examination by the home offense but found almost all the answers to lead his team to victory. He finished with 36 saves.

At the other end the Streltsov brothers showed their host how it should be done: chances were often at a premium for Lada, with home goalie Riku Helenius having long spells as a spectator, but the duo displayed some clinical finishing when it mattered. Alexander Bumagin gave Lada the lead on the first power play of the night before Vasily Streltsov set up his brother Alexander to double the lead within 30 seconds. Vasily found the target again early in the second.

After that it was the Masalskis show, with big saves to deny Topi Jaakola, Ville Lajunen, Peter Regin and Pekka Jormakka. He was finally beaten in the third, having already made 25 saves, when Niko Kapanen fired narrowly wide but recovered to convert his own rebound.

Not for the first time in recent years, Vityaz has seen a potential play-off push fade alarmingly on the back of a long losing run. In the past two seasons the Moscow Region team found itself hunting a top-eight finish as the New Year preparations started, only to come down with the decorations later in January.

This season the team made a slightly stronger start than in previous years, but unfortunately the slump also seems to have set in earlier than usual. Tuesday’s loss at Avangard was the 10th in succession for Oleg Orekhovsky’s then Ravil Yakubov’s men.

The game started well enough for Vityaz: Vyacheslav Solodukhin converted a chance on the power play midway through the first period to open the scoring. But teenage defenseman Artur Lauta tied the scores soon afterwards with his second goal of the season and third-period goals from Sergei Shirokov and Denis Parshin completed the win for Avangard. 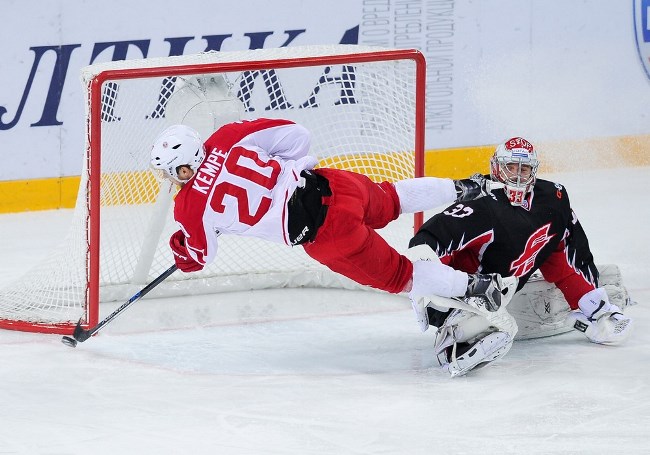 Slovan’s six-game winning streak came to an end in Yekaterinburg as Anatoly Golyshev got back on the scoresheet for Avtomobilist.

Golyshev is the second highest goalscorer in KHL this season, with only Sergei Mozyakin finding the net more frequently. He potted his 20th of the campaign here to cancel out Lubomir Vishnovsky’s opener for Slovan in a breathless start that saw both teams on the scoreboard inside three minutes.

Slovan led once again through Francis Pare but Alexander Torchenyuk tied it up before the first intermission and the middle stanza was all about the host. Eero Elo and Alexander Pankov lifted Avto to a 4-2 lead and even though Ladislav Nagy got one back early in the third the home team held on to claim its first win in three games. 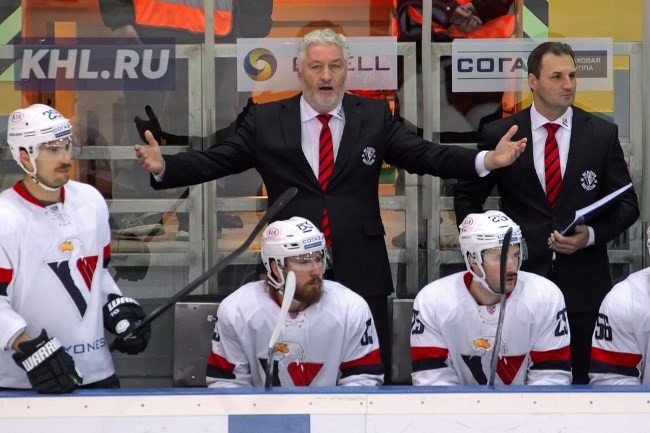 Barys earned a shoot-out win at home to Dynamo Moscow thanks to Nigel Dawes’ post-game effort. Earlier the Kazakhs took the lead in the 46th minute when Mike Landin took advantage of a 5-on-3 power play to break the deadlock. Dynamo equalized through D-man Juuso Heitanen with three-and-a-half minutes to play.

Ugra came from behind to win 4-1 at home to Medvescak. Marek Kvapil put the visitor ahead midway through the second period but Pavel Medvedev tied the scores almost immediately. Pavel Varfolomeyev got the go-ahead goal late in the second and further strikes from Evgeny Lapenkov and Pavel Bortnikov completed the scoring.