The latest re-run of last season’s Gagarin Cup final saw Ak Bars once again come out on top against the team that mauled it so badly at the culmination of the previous campaign.

When the two teams last met in Kazan a whirlwind offense from the visitor set up a decisive 6-1 victory, but this time things were very different. SKA mustered just three shots on Emil Garipov’s net in the first stanza, as well as seeing Yegor Yakovlev expelled from the game for striking out at Justin Azevedo with his stick. Ak Bars took advantage in the 16th minute, taking the lead through Dmitry Obukhov’s goal.

The middle session was a mirror image of the opening. This time Ak Bars managed a miserly trio of efforts on target and SKA tied the scores through Alexei Ponikarovsky juts before the second intermission. But the third saw the home team take a crucial two-goal advantage as Mikhail Varnakov and Fyodor Malykhin scored in the first seven minutes. Dmitry Kalinin got one back, but it was too late to save SKA.

Jokerit too hot for Loko

An uncharacteristic fumble from Lokomotiv goalie Alexei Murygin proved costly for his team in Helsinki. What should have been a fairly straightforward block from a Brandon Kozun shot late in the first period turned into a nightmare for the in-form netminder as he failed to get a form glove on the puck and watched in horror as it dropped to the ice and bounced into the goal.

That made it 2-0 for Jokerit in the big clash in the Western Conference, a lead that it did not relinquish. The prolific Kozun also had a hand in the opening goal, claiming an assist as Jesse Joensuu opened the scoring early on, but for long periods the game fire to really catch fire. A scoreless second period was wrecked by penalties and it wasn’t until the 56th minute that Loko got on the scoreboard through Sergei Konkov. That sparked Jokerit into action once again and Niko Kapanen profited with an empty-net goal to seal the win.

CSKA cut the gap at the top of the table to a single point on a memorable night for rookie forward Andrei Kuzmenko. The 19-year-old got his first ever KHL goal to open the scoring and set his team on the way to a convincing win.

That opened the floodgates: Dmitry Kugryshev doubled the lead on the power play in the 13th minute, Roman Lyubimov added two goals and in between Evgeny Korotkov added a short-handed effort to rub salt into Admiral’s wounds.

There were few bright spots for the visitor, but a late goal from Niklas Bergfors might be a cause for genuine consolation. The Swede, so influential in his two previous seasons, had scored just twice this term and was even sent to Admiral’s farm club for a spell to recover his form. If that treatment has worked, it could make a big difference in the coming weeks. 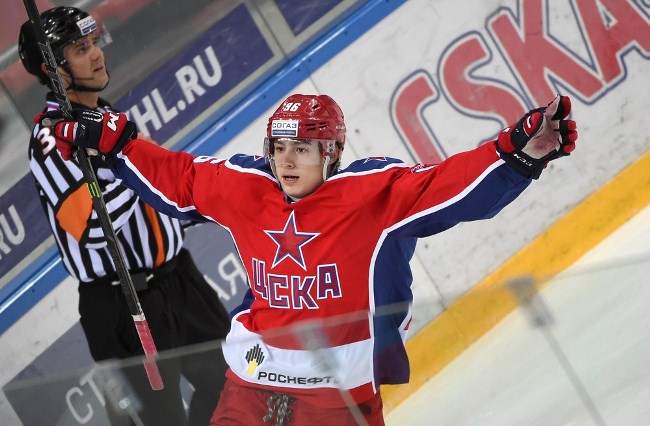 Two first-period goals proved good enough to lift Spartak to victory at Lada. Sergei Shmelyov and Vyacheslav Leshchenko did the damage; Alexander Bumagin pulled one back in the middle session.

Severstal had most of the chances, but Amur made its moments count in a 4-1 win in Cherepovets. Oleg Li and Denis Tolpeko fired a deadly double salvo early midway through the first period and Anatoly Nikontsev’s reply was as good as it got for Severstal. Evgeny Grachyov and Vladislav Ushenin wrapped up the scoring for Amur.

HC Sochi picked up a 2-1 win at Dinamo Riga thanks to goals from Andrei Kostitsyn and Ziyat Paigin. Miks Indrasis pulled one back late on for the Latvians.

High-flying Torpedo saw its progress checked by Medvescak. The Croatians edged a 2-1 home win on Patrick Bjorkstrand’s 37th-minute game winner. Mark Katic put the home team ahead on the power play in the opening session but Alexander Budkin tied it up early in the second.