The race to lead the Eastern Conference has felt like a battle within the Chernyshev division for much of this season, so when divisional rivals Sibir and Avangard went head-to-head the outcome was destined to shape the progress of the title race. Would Sibir consolidate its advantage as it looks to maintain its steady improvement year-on-year and reach new heights this time? Or could Avangard claw back some lost ground?

Not surprisingly, the teams proved tough to separate. For two periods the action was hard and uncompromising and the scoresheet was blank until 39:55, when Sergei Shirokov put Avangard ahead on the power play.

Sibir was having a tough time solving Dominik Furch in the visitor’s goal and home hopes were looking doubtful when Oleg Gubin tied it up with barely three minutes left to play. Having earned his team a reprieve in regulation, Gubin went on to win it in overtime. Sibir stands eight points clear in the East; only Loko and CSKA have a better return in the overall KHL table.

Avtomobilist forward Alexei Simakov played his 850th game as his team took on Ugra – and his colleagues celebrated the occasion with a convincing victory.

Pavel Varfolomeyev’s early goal for Ugra was the only blip on the night but once Alexei Mikhnov equalized late in the first period the home team was rarely troubled further.

Second-period domination did not produce a goal, but Alexander Pankov scored on the power play in the 49th minute to give Avto the lead and Nikita Tryamkin wrapped it up with an empty net goal. 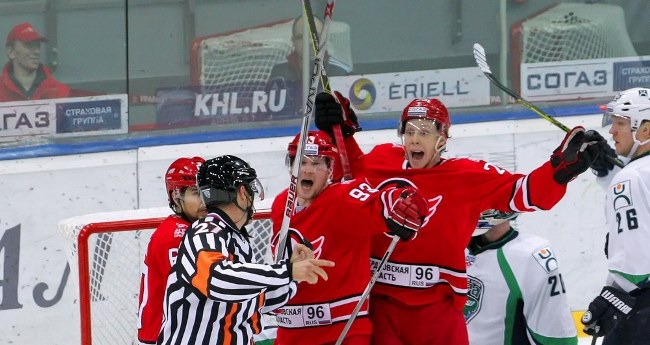