Andrei Nazarov had an unhappy return to St. Petersburg as he saw his Barys team’s winning run come to an end.

After leaving the head coach’s job at SKA and returning to Astana last month, Nazarov had masterminded a revival for Barys, leading the team to six wins in a row. But the defending champion was too good here, cruising to a 5-1 victory.

The game got off to a fiery start, with SKA’s Evgeny Artyukhin and Barys’s Damir Ryspayev coming to blows after just 84 seconds of action. That was the end of Ryspayev’s evening; Artyukhin was given a 5-minute penalty. Before that was over SKA was 1-0 up thanks to Vadim Shipachyov and in the 16th minute Alexander Barabanov made it 2-0 before Maxim Khudyakov got one back for Barys.

In the second period Ilya Kovalchuk took control the game, setting up Alexei Ponikarovsky for the 3-1 goal before making it four himself. Jarno Koskiranta added a fifth early in the third.

After failing to find a way past Medvescak’s Danny Taylor last time out, CSKA’s forwards were hoping for better luck at home to Slovan. Once again, though, an inspirational goaltending display denied the Army Men.

Michael Garnett, more popular in the blue corner of Moscow after his spell with Dynamo, produced a breath-taking display on his return to the capital. He made 45 saves to extend CSKA’s scoreless run.

One clue as to the home team’s offensive problems might lie in the number of shots coming from defensemen: Nikita Zaitsev had seven efforts on goal, a tally matched only by forward Geoff Platt. Fellow blue-liners Mikhail Naumenkov, Denis Denisov and Artyom Sergeyev shared six futher efforts between them, suggesting that at times CSKA struggled to get inside Slovan’s defense.

At the other end Marek Viedensky opened the scoring in the second period and Francis Pare wrapped it up with an empty net strike. Finally, as frustrations peaked, Nikita Kvartalnov and Rok Ticar were embroiled in a fight on the hooter. 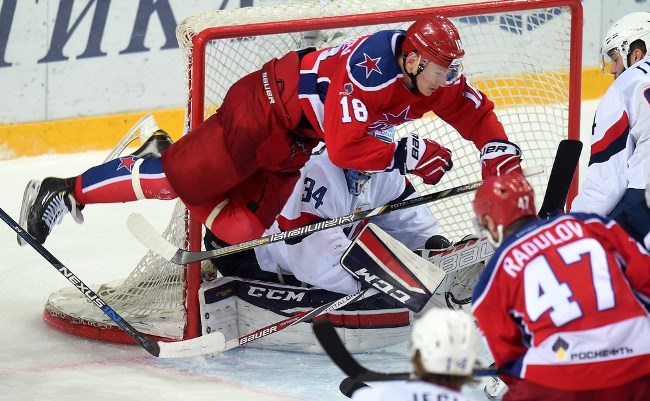 Loko battles back in thriller

Lokomotiv belied its reputation for miserly, low-scoring hockey with a wild 7-4 win at home to Avtomobilist.

Denis Mosalyov led the scoring with a hat-trick, but Avto will be wondering how it stalled so badly after a wonderful start to the game saw the visitor 3-0 up after barely 10 minutes.

Anatoly Golyshev (2) and Petr Koukal had Loko in disarray early on, chasing Vitaly Kolesnik from goal after 10:21 as the home team seemed destined for a long night. However, a rapid reversal of fortune saw the Railwaymen tie the scores before the first intermission thanks to Alexander Polunin, Daniil Apalkov and Mosalyov’s first of the game.

The second period began with Eero Elo putting Avto back in front, but that was the end of the visitor’s contribution to the game. Sergei Konkov tied it up midway through the game and when Pavel Kraskovsky made it 5-4 in the 38th minute Lokomotiv had a lead that it would not relinquish.

Mosalyov added two more in the final stanza to complete the win and maintain Loko’s position on top of the KHL table.

A week ago Magnitka visited Kazan and left with a shoot-out victory. Here the roles were reversed, with Ak Bars playing the part of the highwayman snatching the points on the road.

A typically close-fought game between these old rivals was scoreless until deep into the second period. That had much to do with the impressive form of Emil Garipov, who kept a menacing Metallurg offense at bay until Wojtek Wolski finally broke the deadlock. Ak Bars tied it up with a short-handed goal in the third period; Mikhail Varnakov converted a breakaway chance after Dmitry Arkhipov robbed Chris Lee on the boards.

That took us to overtime and ultimately to a shoot-out, where Fyodor Malykhin settled the outcome. 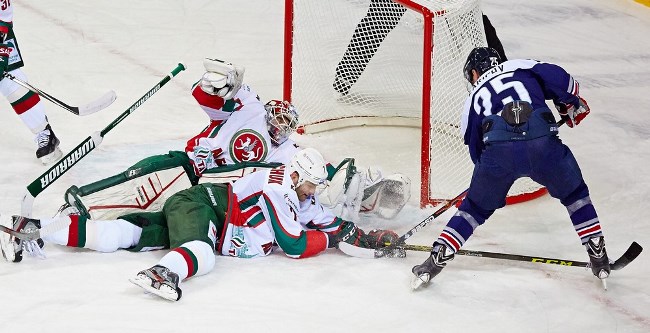 Sibir ended its stumble and exacted revenge for its 0-7 drubbing at home to Amur last week with a 3-0 win in Khabarovsk. After a goalless first period Damir Zhafyarov and Oleg Gubin put Sibir 2-0 up in the second. Tomas Vincour found the empty net late on to complete the victory.

Jokerit went down to an overtime loss at home to Avangard. Martin Erat got the game winner in the 63rd minute after a 2-2 tie. The Finns led through Brandon Kozun’s fifth-minute goal, but Ilya Mikheyev and Vladimir Sobotka turned the game around in the middle session. Peter Regin’s power play goal, off a Kozun assist tied it up in the third.

Salavat Yulaev powered to a 5-1 win at home to Lada. The teams traded first-period goals but power play markers from Andreas Engqvist and Sami Lepisto put Salavat in control in the second. Maxim Goncharov and Sergei Soin scored late on to add emphasis to the final scoreline. 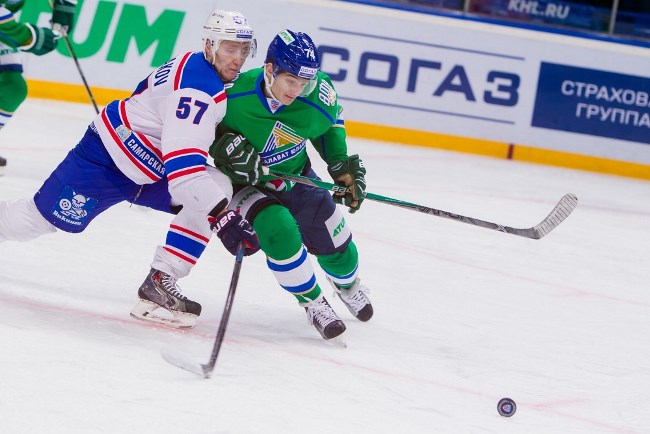 Severstal handed Medvescak a heavy defeat, winning 4-0 in Cherepovets. Andrei Shefer opened the scoring early on before Pavel Buchnevich scored a hat-trick in 10 minutes either side of the second intermission. Sergei Magarilov made 22 saves.

HC Sochi rallied in the third period to overpower Ugra. The game was tied at 1-1 after 40 minutes, but goals from Ziyat Paigin, Ilya Krikunov, Mikhail Anisin and Andrei Kostitsyn gave the host team a comfortable victory.

Admiral won 2-1 at home to Metallurg Novokuznetsk. Artyom Poshendyalov gave the host the lead in the first period, Robert Kousal tied the scores early in the third but Dmitry Sayustov won it less than a minute later.