Whatever happened during the international break clearly did little to help Sibir – the Eastern Conference leader has yet to win since returning to action and went down to another defeat on the Pacific coast.

Konstantin Makarov did most of the damage with two goals, including the game-winner. Oskars Bartulis also found the net for Admiral, while Artyom Voroshilo and Stepan Sannikov kept Sibir in contention until the dying moments.

But, in a passage of play that summed up the team’s recent form, Sibir withdrew goalie Alexander Salak only to gift possession to Admiral and present Yegor Dugin with an empty net goal to wrap up the result.

A five-game winless streak had seen Lokomotiv toppled from its table-topping position, but the recovery began in Ufa. Victory here took the Railwaymen back to the KHL summit, one point ahead of CSKA.

The outcome was settled in the second period as Loko scored three unanswered goals. Daniil Apalkov and Alexander Polunin struck either side of the halfway stage and Apalkov then had an assist on Patrick Hersley’s power play goal to make it 3-0.

Igor Grigorenko got the home team on the scoreboard early in the third, but Apalkov scored his second of the night – shorthanded this time – to reinstate Loko’s three-goal advantage. Linus Omark hit back straight away, but Loko shut the game down in the last 10 minutes to claim a morale-boosting win.

Avangard closed the gap on Sibir to four points at the top of the Eastern Conference thanks to a victory at defending champion SKA.

The home team had looked to be in better form since the international break, and Sergei Zubov had done enough to land himself a permanent appointment as head coach, but SKA came undone here.

The scoring came in the second period. Sergei Shirokov opened the scoring in the 22nd minute, only for Anton Burdasov to tie the game in the 29th minute. Parity was short-lived, though: Denis Kulyash put Avangard in front again within 90 seconds and Alexander Perezhogin made it 3-1 in the 35th.

With a big lead to defend, Avangard closed out the third period relatively calmly to complete the win. 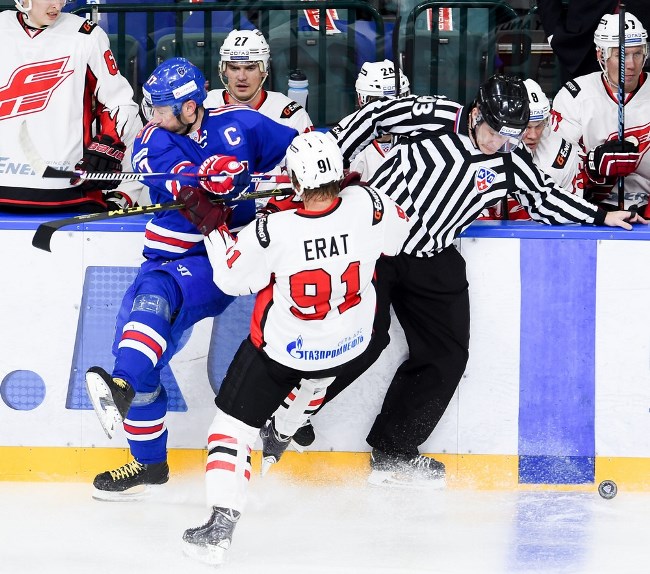 Metallurg Magnitogorsk trailed twice but still edged a 3-2 verdict over HC Sochi to close in on Sibir. Ziyat Paigin and Denis Kazionov gave the visitor the lead, but Oskar Osala and Sergei Mozyakin cancelled them out before Danis Zaripov won it late on.

Neftekhimik’s American international Dan Sexton gave his team victory in the Tatarstan derby with Ak Bars. He settled the shoot-out after a 2-2 tie in Nizhnekamsk. The home team made a great start with Alexander Kitarov opening the scoring in the fourth minute, but Ak Bars recovered to lead thanks to Fyodor Malykhin and Justin Azevedo. Jeff Taffe tied it up late on, but Ak Bars could not force a win.

Spartak returned to its old Sokolniki home for the first time this season, but had little joy in familiar surroundings. Two goals in 21 seconds early in the game saw Kevin Dallman and Vadim Krasnoslobodtsev put Barys on the way to a 5-2 win. Konstantin Romanov, Maxim Khudyakov and Martin St-Pierre also notched for the Kazakhs, who are now on a six-game winning run. Alexander Mereskin and Gleb Klimenko got Spartak’s replies. 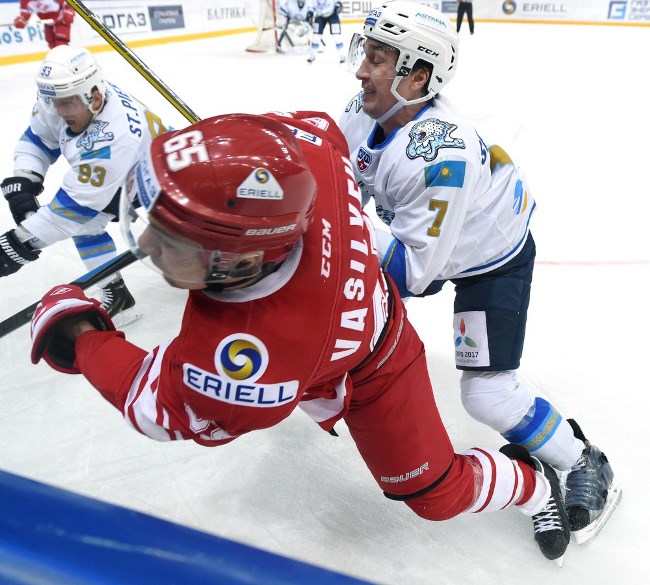 Traktor won 3-2 at home to Lada after a shoot-out. Anton Glinkin decided the outcome after a 2-2 tie. Lada took the lead late in the first period with a power play goal from Igor Magonin, but Traktor scored twice in a minute thanks to Dmitry Pestunov and Yegor Martynov to lead in the second period. Tobias Viklund tied it up in the 56th minute.