Medvescak goalie Danny Taylor was the star of the show as his team withstood a CSKA barrage before snatching an unlikely win.

The Army Men responded to Saturday’s shoot-out loss in Bratislava by welcoming back Alexander Radulov and the talismanic forward led the offense with eight shots on Taylor’s net out of a team tally of 39.

But the British-born goalie, who spent last season with Dinamo Minsk before switching to Medvescak in the summer, stopped all 39 of those efforts to frustrate the table-topping visitor before Patrick Bjorkstrand delivered the sucker punch just 17 seconds into overtime.

The stage was set for Kaspars Daugavins to take his revenge on his former employer – but the Latvian forward ended up on the losing side.

To cap an unhappy evening for the player named the KHL’s leading forward of the previous week, he took a puck in the face midway through the third period and was unable to play a part in over time or the post-game shoot-out as Dynamo edged the verdict.

Instead it was Maxim Pestushko who took the honors, finally settling a prolonged shoot-out when he put attempt #14 past Ilya Proskuryakov to win the game.

A close-fought shoot-out was little surprise after a game in which there was little between these two teams. Dynamo took the lead in the 15th minute through Konstantin Volkov, but Torpedo turned it around the middle frame with goals from Alexander Budkin and Vyacheslav Kulyomin. That lead was short-lived, though: Martins Karsums tied it up seconds into the final period and after that only Pestushko could separate the teams. 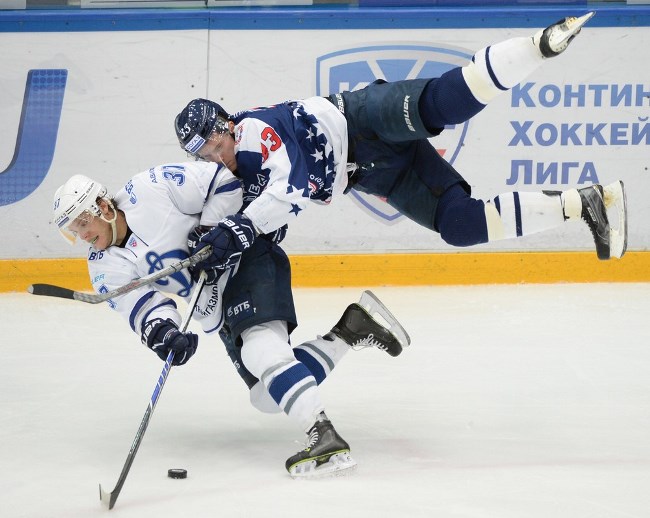 The game was tied at 2-2 and the Finns had just killed a penalty when Juhamatti Aaltonen, with his second of the night, potted the winning goal on 57:08. There was an element of fortune about it, with Topi Jaakola’s pass finding his team-mate all alone on the face-off spot and Aaltonen’s shot bouncing in via the goalie’s back. But there was more to come in the closing stages as Jaakola made it 4-2 with an empty net goal.

Earlier, though, Ugra put up a strong performance as it looked to extend a three-game winning run and continue its recovery from a slump at the end of October.

Vitaly Sitnikov put the home team up in the sixth minute and that lead lasted until the first intermission as defenses were on top at both ends. But the second session saw Jokerit hit back: Philip Larsen tied the scores before Aaltonen gave the visitor the lead. Oleg Pogorishny got Ugra back on level terms early in the third, but Jokerit had too much in the closing stages.

Avtomobilist led twice but could not beat Dinamo Riga. The Latvians took the game to overtime and won the shoot-out thanks to Kaspars Saulietis. Earlier Vitaly Popov and Eero Elo scored for Avto, but Tim Sestito and Tomas Kundratek tied the game at 2-2. 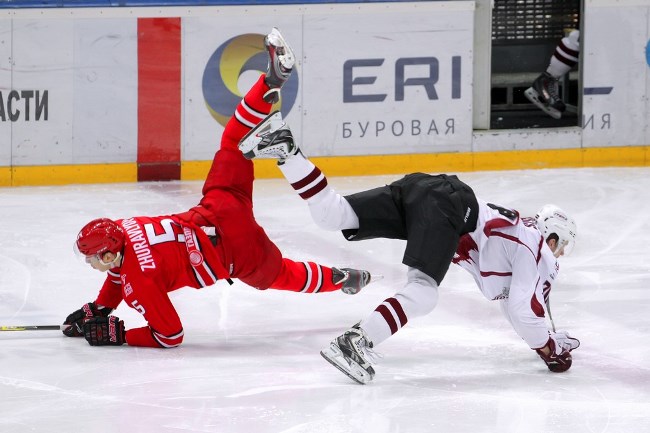 When Ondrej Nemec was sent to the sin bin with his Severstal team trailing 3-4 at Slovan, it looked like the game was almost up – but instead his two-minute rest sparked a flurry of late scoring. Undaunted by playing shorthanded, Severstal tied the scores through Sergei Monakhov just 10 seconds after the penalty was imposed. But Slovan was not about to let go and Lubomir Vishnovsky spared the home team’s blushes by converting the power play a minute later to clinch a 5-4 win. Nemec got on the scoresheet himself early on to put Severstal up and the visitor led on three separate occasions before Rok Ticar gave Slovan a 4-3 lead late in the second period.

Dinamo Minsk started like an express train against Vityaz, but ended up hanging on for a 3-2 win. Andrei Stepanov and Matt Ellison made it 2-0 inside three minutes and Paul Szczechura added a third midway through the second period. However, Vityaz made a game of it late on when Denis Abdullin and Alexander Nikulin clawed it back to a one-goal game with seven minutes to play.