It was a memorable day for goalies in the KHL, with seven netminders posting shut-outs in Thursdays 14 games.

Loko goalie Alexei Murygin has been the shut-out king this season, blanking seven opponents so far. But this time it was CSKA that kept its goal intact, returning to the top of the table with victory in this summit clash.

Young Ilya Sorokin added a couple more points to his burgeoning reputation with a fine display, making 27 saves to thwart a Loko team that began the day in top spot.

CSKA won it on goals for Dmitry Kugryshev, deflecting home Igor Ozhiganov’s shot from the blue line, and Alexander Radulov, who scored a beauty on the backhand in the second period. After four consecutive defeats, Loko’s 13-game winning streak is turning into a distant memory. 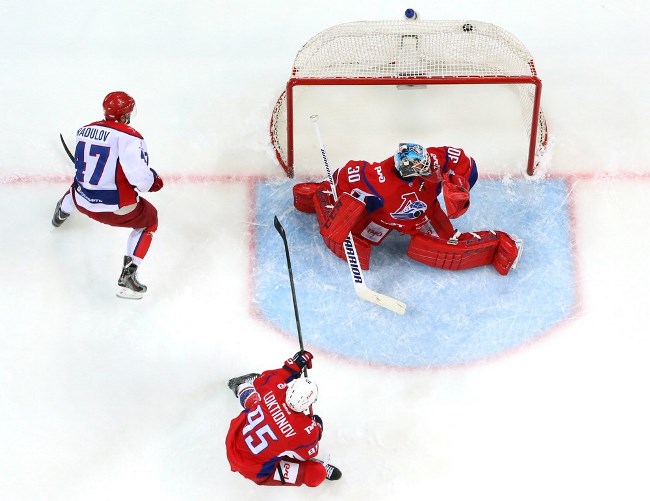 Until the start of this season, Moscow’s Luzhniki Arena was home to Dynamo. Now, with the Blue-and-Whites moving to the newly-built VTB Ice Palace, Spartak has moved across town and attracted improved crowds to what was once the country’s premier ice venue. But tonight the old owners came back for a visit – and thoroughly enjoyed an evening in familiar surroundings.

It didn’t take long for Dynamo to make itself comfortable in a familiar place. Martins Karsums opened the scoring after just 12 seconds. Maxim Pestushko doubled the lead in the middle stanza, with Spartak’s offense disappearing from view for long periods and managing just two shots on Alexander Yeryomenko’s goal.

The new home team rallied a little in the third, more or less matching Dynamo for chances, but Maxim Karpov’s empty net goal sealed a derby win. Yeryomenko finished with 19 saves for a shut-out. 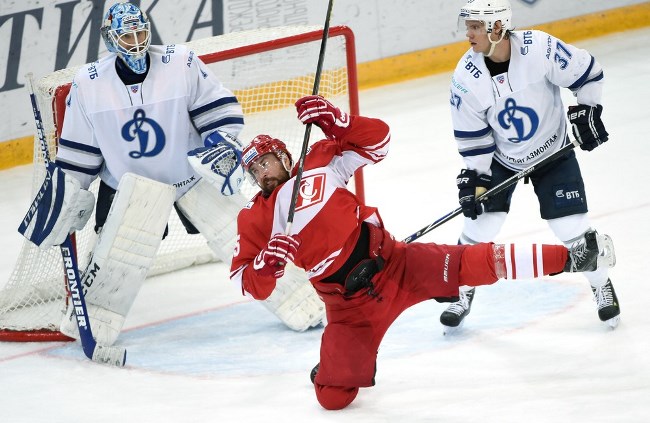 The day’s biggest shock came in the heart of Siberia, where Eastern Conference high-flyer Sibir was demolished by an Amur team struggling to secure a play-off spot.

Juha Metsola has shown some impressive form in his rookie KHL campaign, repeating some of the success that saw him voted the top goalie in the Finnish League last season, and Thursday’s performance was another showcase for him. He made 27 saves on a night when everything went right for Amur.

Three goals came in the first period, with Danil Faizullin, Tomas Zohorna and Vladimir Pervushin on target. Then, after a goalless middle session, the Ushenin brothers took control for Amur. Vladislav scored one goal and three assist; Vyacheslav got 1+2. Ruslan Bashkirov and Vitaly Shulakov completed the scoring.

Edgars Masalskis shone brightest of the goaltending stars, making 42 saves to deny Salavat Yulaev in Lada’s 3-0 win. The Latvian faced a storm of pressure on his net after Martin Zatovic and Alexander Streltsov gave Lada an early 2-0 lead. Anton Shenfeld completed the scoring late on. 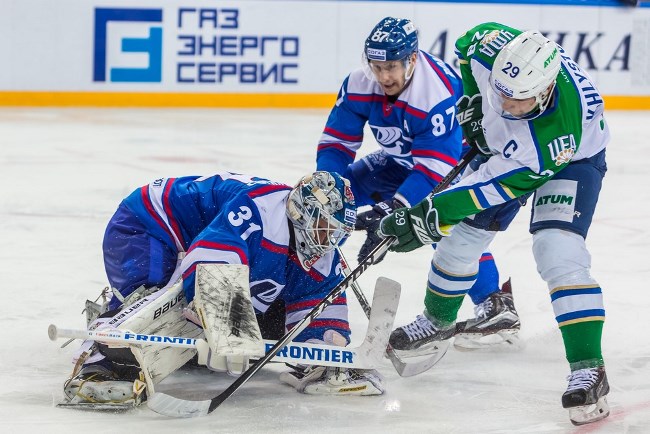 Jan Laco also had a busy evening, making 33 saves to lead Barys to a 2-0 win at home to Jokerit. Dustin Boyd and Roman Savchenko got the goals in the first period.

The other goalies to stop all comers included Igor Bobkov, who made 27 saves in Admiral’s 2-0 win at Metallurg Novokuznetsk. Alexei Ugarov and Alexander Kuznetsov were the scorers there.

Alexander Sudnitsin of Neftekhimik made 29 saves as his team won 4-0 at Avtomobilist. Jeff Taffe scored twice, with Yegor Milovzorov and Mikhail Zhukov also on target.

Two of the Eastern Conference’s oldest foes served up a typically hard-fought encounter in Kazan, with Metallurg ultimately taking the win in a shoot-out after a 2-2 tie.

Jan Kovar and Danis Zaripov proved too good for Jussi Rynnas in the shoot-out, denying Ak Bars victory in a game where it led twice.

Dmitry Arkhipov put the home team up in the first period, only for Sergei Mozyakin to tie it up on the power play in the 18th minute. Fyodor Malykhin reinstated that advantage early in the second, but Oskar Osala took it into overtime in the 56th minute.

SKA had to dig deep to overcome Vityaz, with goals in the last three minutes from Vadim Shipachyov and Evgeny Dadonov giving the defending champion a 5-3 win. Earlier recent signing Nikita Gusev scored twice for SKA, but Vyacheslav Solodukhin, Yury Koksharov and Nikita Vyglazov kept Vityaz in contention until the last moments.

Dinamo Riga earned a shoot-out win at Avangard thanks to Kaspars Saulietis. He beat Denis Kostin to snap a 2-2 tie and give the Latvians the bonus point. Earlier Avangard had taken an early lead through Ilya Mikheyev, only for Dinamo to turn the scores around thanks to Oskars Cibulskis and Lauris Darzins. Ivan Lekomtsev tied it up in the 50th minute.

Torpedo wasted little time putting Medvescak out of sight in Nizhny Novgorod. Four goals in the first period from Linus Videll, Daniil Ilyin, Sergei Kostitsyn and Alexander Budkin opened up a big lead before Shaone Morrisonn got one back for the visitor. Tomas Mertl made it 4-2 in the second period but Kaspars Daugavins scored into an empty net to seal a 5-2 verdict for Torpedo.

Ugra took control of its home game with Traktor in the second period, firing in three unanswered goals on the way to a 3-1 success. Alexander Ugolnikov, Grigory Zheldakov and Konstantin Panov did the damage; Anton Glinkin got one back for Traktor in the third.

Jonathan Cheechoo and Matt Ellison put Dinamo Minsk on the victory trail at home to Slovan. Jeff Glass was close to yet another shut-out but Rok Ticar beat him in the 55th minute as it finished 2-1.

Veteran forward Pyotr Schastlivy scored twice to lead HC Sochi to a 4-1 win at home to Severstal. Ben Maxwell and Andre Petersson were the other home scorers; Maxim Trunyov got Severstal’s consolation.