Slava Voynov, a Stanley Cup winning defenseman with the LA Kings, made his KHL debut after completing his move to SKA – and contributed an assist in his team’s win against bitter rival Dynamo.

These two teams have plenty of history: the Muscovites long seemed to have the Indian sign over the Army Men in play-off action, and although SKA emphatically buried that curse last post-season, the previous six meetings in the regular championship had all gone Dynamo’s way.

So many in the capacity St. Petersburg crowd could have been forgiven a weary sense of deja-vu when the Blue-and-Whites turned the game around in the first period, cancelling out Ilya Kablukov’s early opener to lead 2-1 through Martins Karsums and Dmitry Vishnevsky.

This time, though, the plot was different. Nikita Gusev, another recent recruit for SKA, tied the game midway through the second period. The former Ugra man did a great job to carve out a shooting opportunity for himself after Voynov and Kablukov applied the pressure in Dynamo’s zone. Kablukov also had a hand in the game winner, dropping the puck off for Anton Burdasov to rip a one-timer from the top of the circle that flew past Alexander Yeryomenko.

Kablukov finished with 1+2; Voynov’s return to competitive hockey after his trials in the US ended in success. 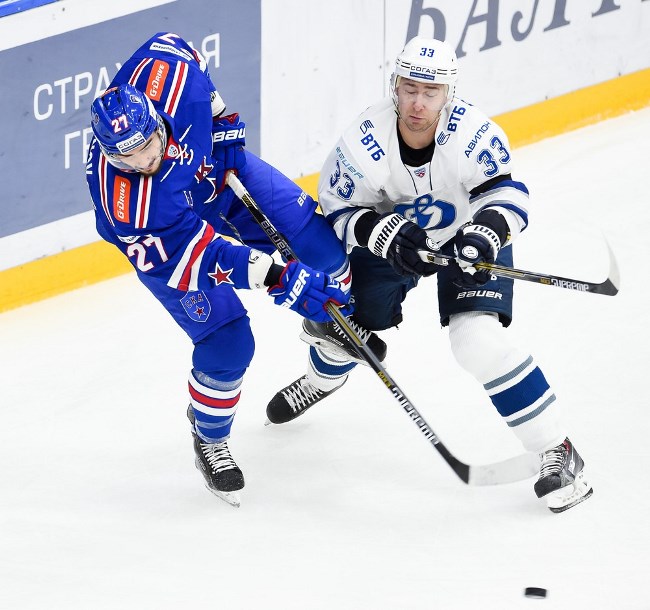 Lokomotiv fell to a third successive defeat as the international break failed to put the team back on track after the end of its 13-game winning streak.

The visit of lowly Severstal should have been an ideal opportunity to get back to winning ways, especially given the boost of a return for fit-again goalie Alexei Murygin. However, Loko’s offense rarely clicked into gear, even though Andrei Loktionov put the home team 1-0 up in the 25th minute.

Severstal tied it up in the 41st minute through Pavel Buchnevich, and the same player settled the outcome in that shoot-out. Murgyin made 30 saves on his return but the goaltending honors went to Sevestal’s Sergei Magarilov. He was introduced to the game solely for the shoot-out and won his duels with Loktionov and Vladislav Kartayev.

The latest episode in the long-running rivalry between Ak Bars and Salavat Yulaev brought together two old coaching opponents – Zinetula Bilyaletdinov and Igor Zakharkin. Not surprisingly they set up two teams well capable of matching one another, only for the outcome to be settled by two goals in a minute midway through the final period.

Ak Bars was trailing 2-1 on a goal from Dmitry Makarov in the last minute of the middle session when the game was turned upside down. Mikhail Varnakov tied the scores on 49:29 before Mattias Sjogren potted the game winner 51 seconds later.

Earlier Salavat took an early lead through Sami Lepisto but Artyom Lukoyanov tied it up on the power play midway through the first period.

Sergei Mozyakin notched goal number 401 of his career as Metallurg smashed Lada. Mozyakin got his team’s first of the night in the 10th minute, cancelling out Alexander Streltsov’s opener. Twenty-six seconds later Danis Zaripov made it 2-1 and the stage was set for a rout.

Wojtek Wolski led the way with two goals, both off Mozyakin assists, while Oskar Osala, Bogdan Potekhin and Sergei Tereshchenko completed the scoring.

Lada’s starting goalie, Edgars Masalskis, lasted until the 22nd minute before he was replaced by Ivan Kasutin.

The biggest crowd of the season at Sochi’s Bolshoi Ice Dome saw the home team push high-flying CSKA to the limit before succumbing in the dying seconds.

The first period belonged to the home team, with Igor Ignatushkin opening the scoring after 42 seconds and Evgeny Skachkov doubling the lead in the 10th minute. But the loss of Andrei Kostitsyn, ejected from the game for tripping Maxim Mamin, put a blot on a good start to the evening.

CSKA, meanwhile, stepped up its game. Dmitry Kugryshev got one goal back 30 seconds into the middle stanza and Jan Mursak tied the game in the 49th minute.

Sochi was hanging on towards the end and the Army Men finally broke through with 81 seconds to play thanks to a goal from young Ivan Telegin. An empty-netter from Mursak put the seal on the win.

Avtomobilist came from 0-2 to beat Traktor 5-2. Vyacheslav Osnovin and Anton Glinkin put Traktor on top in the first period, but after that it was all Avto. Anatoly Golyshev (2), Alexander Pankov, Alexander Torchenyuk and Nikita Tryamkin got the home goals. 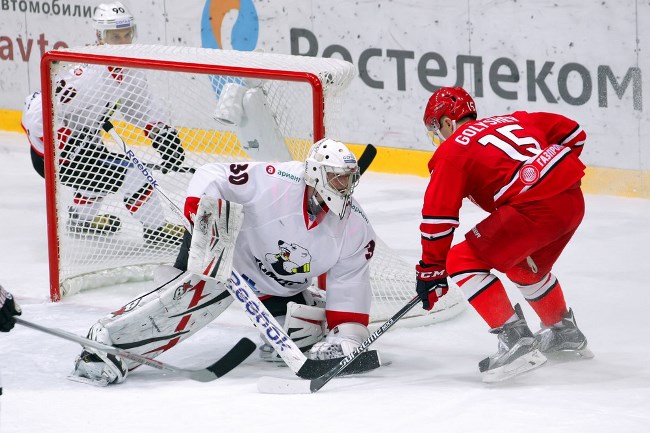 Sibir came from behind to win a roller-coaster game 6-4 against Metallurg Novokuznetsk. The first period was scoreless, but in the second stanza the teams shared six goals, with Kuznya claiming a 4-2 lead. But it all changed in the third as two goals from Alexei Kopeikin and further markers from Viktor Bobrov and Oleg Gubin put Sibir on top.

Avangard marked its 65th anniversary over the weekend, but couldn’t continue the party at home to Jokerit. A single goal from Philip Larsen in the 13th minute proved enough to separate the teams. Henrik Karlsson made 31 saves to keep Avangard at bay.

Barys hit top form in the third period of its game at home to Dinamo Riga, powering to a 5-1 win. Leading on a Vadim Krasnoslobodtsev goal, the Kazakhs extended the lead thanks to strikes from Nigel Dawes, Dustin Boyd, Konstantin Romanov and Roman Starchenko. Vitalijs Pavlovs got Dinamo’s consolation. 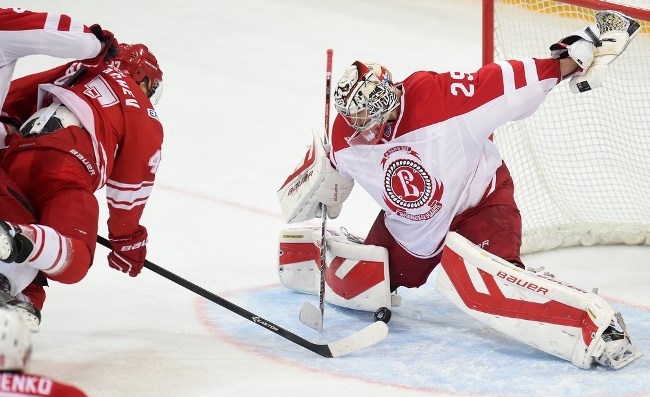 A strong first period set Torpedo on the road to victory over Slovan. Kaspars Daugavins, Alexei Sopin and Sergei Kostitsyn opened up a 3-0 lead in the opening session and Daugavins struck again in the second as Torpedo won 5-3.

Medvescak was on top throughout to record a 4-1 win at Dinamo Minsk. Patrick Bjorkstrand opened the scoring in the ninth minute and Stefano Giliati doubled the lead in the second period. Alexei Kalyuzhny got one back for Dinamo but further scores from Mikko Kousa and Tomas Mertl made the game safe.

Ugra snapped a four-game losing streak with a 2-1 win at home to Neftekhimik. Grigory Zheldakov and Pavel Varfolomeyev scored in the first period; Evgeny Grigorenko got one back for the visitor in the second stanza.