The Moscow derby between Dynamo and Spartak was moved forward specially to launch a new free-to-air Russian TV – and delivered all the excitement viewers could have wished for.

Despite a subdued atmosphere in a game played on a day of official mourning for the victims of the Russian passenger jet that crashed in Egypt yesterday, both teams served up a thrilling encounter on the ice.

From the first minute, when Martins Karsums put Dynamo ahead, to the penalty shoot-out where Artyom Fyodorov announced his arrival in the KHL, this was a pulsating encounter which both teams will feel they could have won.

Early on it seemed to be going Dynamo’s way. Denis Kokarev added to that early Karsums strike to make it 2-0, and Alexei Tsetkov returned from suspension to make it 3-1 after Konstantin Glazachev got Spartak on the scoreboard against his former club.

But three goals late in the second period turned the game upside down. Alexander Mereskin, Evgeny Bobrov and Alexander Vasiliev scored in the space of three minutes to give Spartak a 4-3 lead , delighting the large contingent of traveling fans in the 10,000 crowd.

That lead was intact going into the last minute, but Spartak’s line-up wasn’t: Bobrov was in the sinbin and the home team pulled goalie Yeryomenko in search of salvation. It arrived in the nick of time when Juuso Heitanen tied the game on 59:12, firing home while Ansel Galimov screened goalie Atte Engren.

That set us up for the shoot-out and a surprise starring role for Fyodorov. The 22-year-old has been in good form in the second tier this season, but mustered barely 10 minutes of KHL game time prior to Sunday. With a penalty shot, though, he seems peerless, scoring twice on Engren to give Dynamo the verdict. 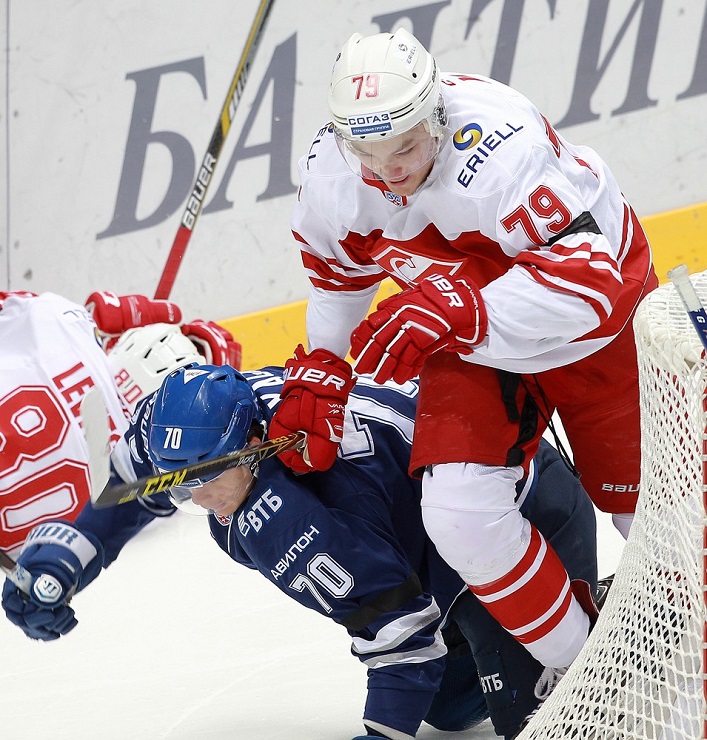 Stefano Gilliati led the way for Medvescak as a convincing home win lifted the Croatians above SKA into seventh place going into the international break.

The 28-year-old Canadian/Italian scored twice to pace his team to victory against one of its big rivals for a top-eight spot.

It was also a big day for Alexandre Bolduc, who scored his first goal for Medvescak to open the scoring in the fifth minute. He tipped home Blake Parlett’s shot in front of the net just before Giliati got his first of the evening.

When Edwin Hartberg made it 3-0 in the 32nd minute it seemed that the game was over, but Slovan battled back with a goal either side of the second intermission from Rok Ticar and Lukas Kaspar.