Loko’s 13-game winning streak finally came to an end in Chelyabinsk after a narrow defeat against Traktor. Victory here would have seen Alexei Kudashov’s team record the second-longest unbeaten run in KHL history; instead Lokomotiv is tied with CSKA and Metallurg Magnitogorsk, both of which also recorded 13-game sequences.

Like many of Lokomotiv’s games it was a tense, low-scoring affair. The deadlock remained until the 33rd minute when Martin Ruzicka got a touch on Alexei Petrov’s shot from the blue line, deceiving Vitaly Kolesnik to open the scoring. Traktor doubled that lead in the third period with a short-handed goal from Alexander Rybakov, evading two defensemen to get his wrist shot away.

Loko got one back through Denis Mosalyov when he fired home Petri Kontiola’s pass from behind the net in the 51st minute. That prompted a valiant attempt to escape defeat, with Pavel Francouz making a smart double save to deny Mosalyov and Daniil Apalkov in the closing stages.

Jokerit celebrated its 48th birthday with a victory over Avtomobilist – but the final scoreline wasn’t as close as the action on the ice.

The party got going in the 12th minute when Niklas Hagman put the home team up, but Alexei Dostoinov tied it up right on the first hooter as Avto threatened to blow out the Finns’ candles.

The middle session was a cagey affair, with the side producing just 11 shots on target between them. Happily for Jokerit, Jesper Jensen’s attempt in the 40th minute popped up a rebound that Jesse Joensuu tucked away to make it 2-1.

Avtomobilist tried to step up the pace in the third but struggled to turn territory into scoring opportunities. A holding penalty called on Vitaly Popov in the 57th minute proved costly: Jokerit converted the power play thanks to Ville Lajunen’s goal and a Topi Jakola empty-netter put the icing on the home team’s birthday cake.

Dinamo Riga handed a hefty beating to Ugra in the Latvian capital. The damage was done with four unanswered goals in the first period: Kristaps Sotnieks, Miks Indrasis, Maris Bichevskis and Edgars Kulda all found the net. Kirill Rasskazov pulled one back early in the second, but there was no heroic story to be told for Ugra – Dinamo continued to cruise to a 7-1 victory to draw level with Severstal at the foot of the Western Conference table. 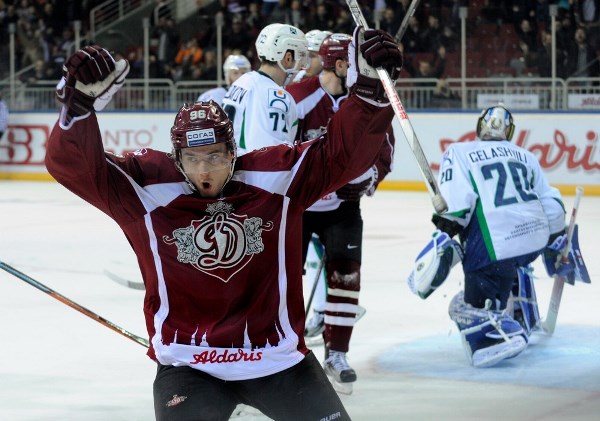 Neftekhimik beat HC Sochi in a shoot-out after a 1-1 tie. Max Warn gave the visitor a third-period lead, but Nikita Shchitov tied it up with five minutes to play. There was no further scoring until Evgeny Grigorenko beat Konstantin Barulin with the first shot of the shoot-out, and that proved decisive.