CSKA hit the goal trail against Severstal, powering to a big win in a feisty encounter.

The third period also featured a brawl with 10 minutes to play: Mamin went toe-to-toe with Pavel Lukin of Severstal, while Nikolai Stasenko and Alexei Bondarev were also sin-binned for their altercation as tempers flared around the Severstal net.

Sergei Mozyakin moved on to 399 career goals in top-league Russian hockey after he opened the scoring in Monday’s victory over Amur.

Needing two more markers to join the elevated company of Boris Mikhailov and Vyacheslav Starshinov in the elite 400-club, Mozyakin scored with his first shot of the game to give Magnitka a sixth-minute lead on the 5v3 power play.

However, that was the only time the captain was able to test Juha Metsola in the visiting goal: he did not have another look at the net all night and must wait a while longer for his milestone.

Magnitka eased to a comfortable win thanks to further scores from Oskar Osala and Yaroslav Kosov. Young Ilya Samsonov made 30 saves for his first-ever KHL shut-out.

SKA shows its class in Omsk

SKA celebrated the official signing of Stanley Cup-winning defenseman Slava Voinov with a display that bore all the hallmarks of a champion team.

Many expected a tough test for the Army Men as they headed to Omsk to take on an Avangard team riding high in the Eastern Conference, but this time everything clicked into place for SKA in the third period as it powered to a convincing win.

Jarno Koskiranta gave the visitor the lead in the 13th minute and that held until Vladimir Sobotka tied the scores early in the third.

But SKA upped the tempo in the closing stages to scored three goals in five minutes and shatter Avangard’s hopes. Evgeny Dadonov got a goal and an assist; Andrei Kuteikin and Joakim Lindstrom also hit the net to put SKA 4-1 up with 10 minutes to play. 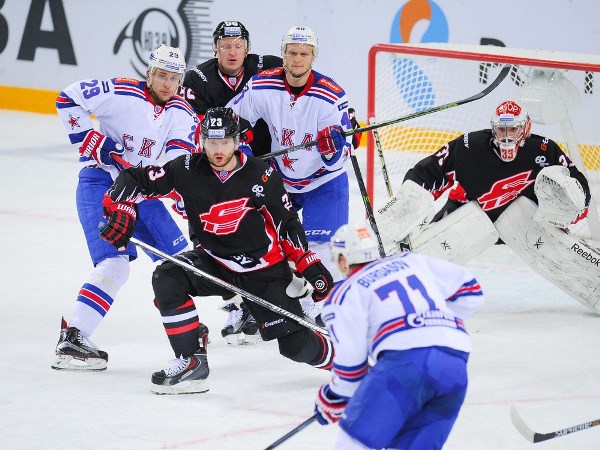 There was no shortage of action in this game, with everyone except the goalies having a great time in Bashkortostan. Admiral eventually prevailed by the odd goal in 11, having never trailed in an absorbing encounter.

Dmitry Sayustov got things rolling in the fifth minute, and the goals just kept on coming. Jonathon Blum scored twice for Admiral; Dmitry Makarov matched that for Salavat. Twice the visitor got a two-goal cushion: 3-1 in the first period and 5-3 in the second, but the host kept fighting back.

Linus Omark’s tying goal in the third period seemed to be taking us to overtime but Alexander Gorshov had the final word, scoring in the 57th minute to give Admiral the points.

Barys coach Andrei Nazarov had a mixed day. He was fined for failing to attend the post-game press-conference after last week’s 0-3 defeat at Medvescak, but he saw his team beat Spartak in overtime to give him his first win since returning to the Kazakh team. Vyacheslav Tryasunov got the decisive goal, completing a fight-back from 1-3 down after Konstantin Glazachev, Gleb Klimenko and Casey Wellman scored three goals in 97 seconds.

Viktor Bobrov’s late goal gave Sibir a 2-1 win at Metallurg Novokuznetsk. Maxim Kazakov gave Kuznya the lead in the 29th minute but Artyom Voroshilo tied it up in the third period.