Ilya Gorokhov made his 1,000th appearance in top-flight Russian hockey as he helped his team to a 4-2 win at Dynamo Moscow.

It was a fitting venue for the Yaroslavl-born defenseman to reach his milestone: arguably his greatest career achievements came in the Blue-and-White of the Moscow team as he won two Gagarin Cups under the coaching of Oleg Znarok and today’s Dynamo supremo Harijs Vitolins.

But this season’s glory trail is all about Lokomotiv: Friday’s win was the 12th in succession for Alexei Kudashov’s men. Dynamo tested the league leader early on, grabbing an early lead through a power play goal from Vladimir Bryukvin, but the second period saw Loko take complete control with four unanswered goals. Not even the absence of in-form Yegor Averin could hamper the offense as Emil Galimov, Daniil Apalkov, Staffan Kronwall and Artyom Ilyenko put the Railwayman on track for yet another win. The only thing missing was a goal or assist from Gorokhov himself, but as a committed team player he would surely be satisfied to celebrate another victory.

Denis Kokarev got a goal back for Dynamo in the third period but by that time the outcome was already beyond doubt and Gorokhov could celebrate his milestone with a resounding win. 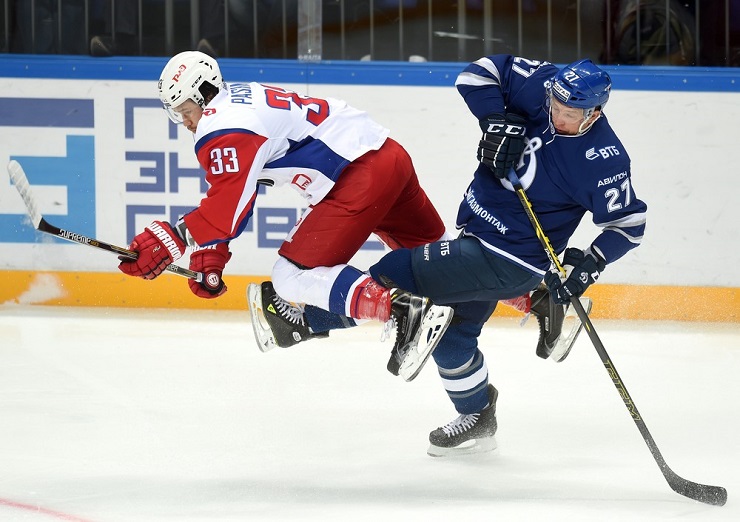 Justin Azevedo has been Ak Bars’ most productive player this season and the Canadian produced a game-winning display to sink Traktor. He finished with 2+1 to take his tally to 25 points for the season as the home team snapped a two-game losing streak.

In the final session Azevedo assisted on Mikhail Varnakov’s score before Artyom Borodkin wrecked Jussi Rynnas’s hopes of a shut-out in the 57th minute.

Matters came to a head after Admiral’s midweek hammering against Torpedo, but after head coach Alexander Andrievsky was persuaded to stay in his post the team delivered an encouraging response against Dinamo.

The game was won in the third period when the home team hit three unanswered goals through Artyom Podshendyalov, Jonathan Blum and Alexander Kuznetsov.

The first two sessions were evenly-matched. Dinamo took the lead when Paul Szczechura scored on the power play late in the first period, but Konstantin Makarov and Viktor Alexandrov turned the game around in the second. Andrei Stepanov tied it up in the 40th minute before Admiral sailed away in the third.

There were two penalty shots in Podolsk where Vityaz eased to a 3-1 win over HC Sochi. Pyotr Schastlivy was the first to score from a set piece, cancelling out Roman Horak’s opener. But Mario Kempe put Vityaz back in front before Dmitry Shitikov outwitted Konstantin Barulin in their duel to wrap up the win for the host. 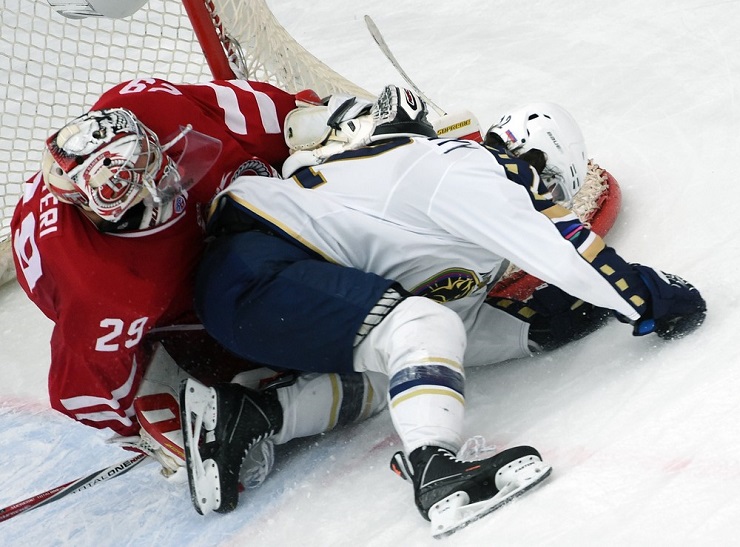 Avangard returned to the top of the Eastern Conference with a 3-0 win at Slovan. Ivan Lekomtsev opened the scoring before Nikolai Lemtyugov and Denis Parshin extended the lead in the second period. Denis Kostin made 24 saves.

Two goals in the closing stages lifted Torpedo to a 3-1 win at Amur. Denis Shurakov and Carl Klingberg snapped a 1-1 tie in decisive style with less than 10 minutes to play. Earlier Sergei Kostitsyn and Danil Faizullin traded first-period markers.

Mark Flood was Lada’s game-winner at home to Neftekhimik. He struck in the 54th minute to snap a 2-2 tie and give the improving Tolyatti team the points. After a scoreless opening, Jeff Taffe and Anton Krysanov traded goals in the second period then Georgy Belousov and Dmitry Ogurtsov shared markers inside a minute early in the third.

Medvescak’s 3-0 win over Barys was dominated by Damir Ryspayev – for all the wrong reasons. The away team’s defenseman picked up 44 minutes in penalties for two separate brawls at the start and end of the game. Andreas Jamtin, Mike Glumac and Tomas Mertl got the goals – surprisingly all of them at equal strength – while Danny
#round-up