Mathis Olimb stole Sergei Mozyakin’s thunder to lead Jokerit to victory in Magnitogorsk. The pre-game talk was all about whether Mozyakin’s run of form could see him over the 400-point mark in his career, lifting him to the very pinnacle of Russian hockey in the process.

Instead, though, the Magnitka captain went pointless, remaining on 398 for his career, while Norwegian international Olimb took the plaudits with a 1+2 return including the game-winning goal. That came on the power play with 11 minutes left. Jokerit’s Niklas Hagman saw his shot saved, but Denis Platonov could not get control of the rebound and Olimb cashed in to score his team’s third goal. Jan Kovar pulled one back for Metallurg, but it was too late.

Earlier Artyom Zhelezhkov put the home team ahead with his first ever KHL goal, scoring on the rebound from Dmitry Arsenyuk’s effort, but Olimb began to pull the strings in the second period. He had an assist on Juhamatti Aaltonen’s equalizer and also picked up a point as Tommi Huhtala made it 2-1 to Jokerit, although that goal owed more to Oskar Osala’s problems trying to clear the puck from in front of his own net.

SKA, still under the interim guidance of Sergei Zubov, unveiled forward Nikita Gusev following his move from Ugra. He slotted into the second line alongside Evgeny Dadonov and Vadim Shipachyov and the new boy made an impact with two assists on his debut.

Those came on power play goals late in the first period as SKA took maximum advantage of a passage of 5-on-3 play. Andrei Kuteikin and Shipachyov both scored to recover an early 2-0 deficit.

But Avtomobilist would not be denied. The home team began with a whirlwind, scoring twice in the third minute through Eero Elo and Alexei Simakov, and regained the lead in 34th minute with a power play goal from Nikolai Timashov. Simakov’s empty-netter wrapped up the win. 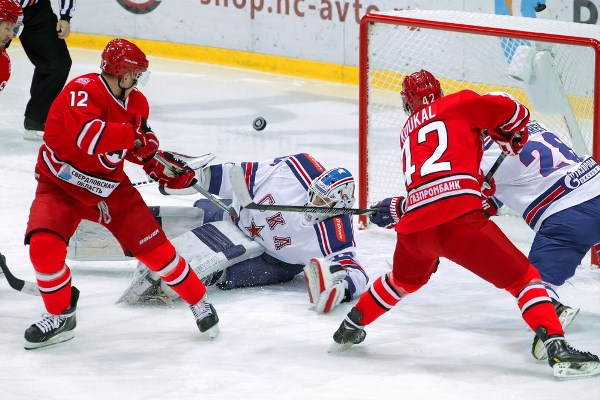 Salavat Yulaev’s good run continued with a 3-1 home win against Dinamo Riga. Nikolai Prokhorkin opened the scoring early in the second period, then Igor Grigorenko and Alexander Loginov extended the lead in the third. Andris Dzerins got a late consolation for Dinamo.