CSKA’s young goalie Ilya Sorokin produced another game-winning display in Wednesday’s big clash in Novosibirsk. The 20-year-old made 21 saves as the teams failed to score in regulation or overtime and then came up big with a decisive stop to deny Maxim Shalunov and secure a shoot-out win.

The result was a fair reflection of play. CSKA outshot Sibir almost two-for-one over 65 minutes but could not find a way past Alexander Salak. The Czech goalie finished with 39 saves, but couldn’t take his invincible form into the shoot-out.

CSKA claimed victory thanks to two successful attempts. First ex-Sibir man Dmitry Kugryshev found a way through Salak’s five-hole, then Alexander Radulov picked his moment, allowed the goalie to commit himself, and found the gap beyond his outstretched pad. In between David Ullstrom got a goal for Sibir, but Sorokin prevented Shalunov from extending the action.

A heavy home defeat proved too much for Admiral head coach Alexander Andrievsky and prompted him to submit his resignation after the game. Andrievsky released a statement saying that the team played much worse than the opposite and that someone had to take responsibility.

However, the club’s GM Ildar Mukhometov quickly rejected the idea that Andrievsky should go. “Nobody’s leaving,” he said. “Alexander Leonidovich spoke about this in the press conference but the club’s directors do not accept his resignation. He will continue to work with the club and will prepare the team for the game against Dinamo Minsk.”

Little went right for Admiral on the ice on Wednesday: the team was 0-4 down in 28 minutes and never recovered. Carter Ashton led Torpedo’s scoring with two goals. 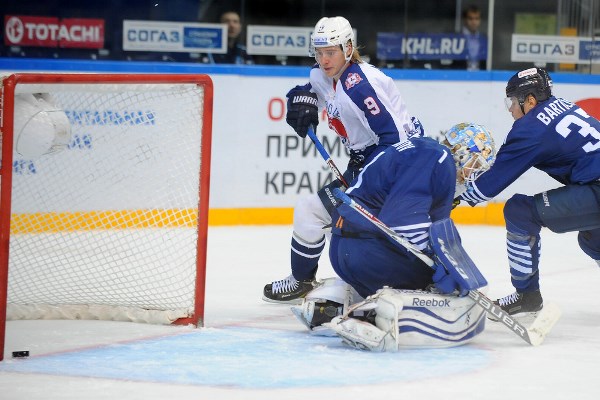 Nazarov back at Barys

Andrei Nazarov, fired by SKA at the weekend, returned as head coach of Barys and took up his position behind the bench for Wednesday’s trip to Bratislava. It wasn’t an easy debut, with in-form Slovan gunning for a fourth successive victory, but Nazarov may take some heart from his new charges’ resilience in pulling back a 1-3 deficit before finally succumbing.

It wasn’t a good start for Barys: Andrej Stastny and Ladislav Nagy had Slovan 2-0 up inside 14 minutes before Nigel Dawes and Vaclav Nedorost traded goals to make it 3-1 at the first intermission.

The second period was better for Nazarov’s men: Brandon Bochenski and Dustin Boyd scored in the closing stages to tie the scores and leave everything to play for in the final session.

But Slovan proved too strong in the end. Tomas Surovy made it 4-3 in the 46th minute before Cam Barker’s empty-netter condemned Nazarov to a losing return.

An early goal from Alexander Perezhogin was just enough for Avangard to win in Zagreb. The forward struck in the second minute on his team’s first attack and, with major help from Dominik Furch’s 24 saves Avangard held on for a 1-0 victory.

Dinamo Minsk removed head coach Lubomir Pokovic over the weekend, but his interim replacement Andrei Kovalyov is encountering a familiar set of problems. The Belarusians went down 4-2 at Amur, giving up goals to Vyacheslav Ushenin, Nikita Cherepanov, Tom Vandell and Denis Tolpeko. Late goals from Alexander Materukhin and Nikita Komarov did little to affect the outcome.

Sergei Monakhov’s overtime goal made it three wins in a row for Severstal. The latest victim was Metallurg Novokuznetsk, which came within 23 seconds of victory before Dmitry Kagarlitsky tied the game at 4-4. That was Kagarlitsky’s second of the night, both of them coming on third-period power plays.