Igor Zakharkin and Zinetula Bilyaletdinov are old coaching rivals, but Tuesday’s clash between their teams was the first time they had faced off as rival head coaches. Both of these Eastern Conference giants have had their problems this season as well; while Zakharkin’s promotion to head coach in Ufa seems to have got Salavat Yulaev’s campaign on track, Bilyaletdinov is still struggling to get consistent results in Kazan.

Andreas Engqvist is one of the players who has improved under Zakharkin’s guidance, and his third-minute opener was his eighth point in eight games since the coaching switch. That lead was short-lived, though: on the power play Mattias Sjogren tied the scores off an assist from Ak Bars’ leading point-scorer Justin Azevedo.

But the game-winner came from an unlikely source. Enver Lisin had yet to score this season after trading Vladivostok for Ufa, but he delivered the decisive blow here in the 25th minute with another power play goal.

Lokomotiv extended its winning streak to 11 games with a 3-1 success at home to Dinamo Riga. The teams were tied in the first period, with neither side finding the target despite Dinamo having the bulk of the opportunities.

But the league leader took control in the second thanks to markers from Staffan Kronwall and Emil Galimov as the game’s momentum was transferred into the home team’s favor.

Lauris Darzins pulled one back for Dinamo in the third and Miks Indrasis was denied by a point-blank save from Alexei Murygin as the clock was running down, but in recent games Yegor Averin has been in unstoppable form and he put the result beyond doubt with an empty-netter. 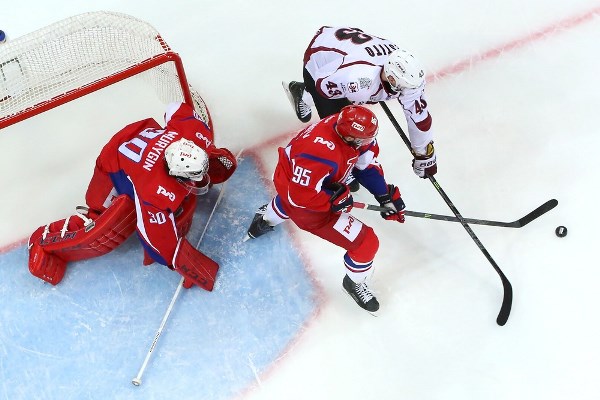 Russian international goalie Konstantin Barulin sent a reminder to Oleg Znarok and colleagues in the run-up to next month’s Karjala Cup in Finland. He made 38 saves to lead HC Sochi to a 3-0 win over Jokerit.

At the other end veteran forward Pyotr Schastlivy opened the scoring in the second minute before Ben Maxwell and Yegor Morozov extended that lead early in the second period. A Jokerit onslaught in the third stanza couldn’t find any way past Barulin.

The victory lifts Sochi above SKA and back into the play-off spots. Jokerit suffered its second successive defeat.

Edgars Masalskis and Georgy Belousov were the stars for Lada in a shoot-out win at Neftekhimik. Masalskis made 31 saves in a 1-1 tie before stopping five penalties in the extras. Belousov was the only player to score in 10 attempts at a game-winning shot. Tobias Viklund and Geoff Taffe traded goals in the first half of the game.