Last season’s meetings between these two teams were memorable for many reasons. In the regular season Ak Bars twice toppled SKA, including a crushing 5-1 defeat in Petersburg; in the Gagarin Cup final the tables were resoundingly turned as SKA took the series in five games, culminating in a devastating 6-1 win in Kazan.

This season, though, neither team has looked like a championship finalist: both clubs are hovering on the edge of the play-off places and struggling to put together a consistent run of form. Consequently tonight’s re-run of last year’s grand final was a key marker for both teams as they look to gain a morale boosting victory.

As a result, perhaps, this was a low-scoring encounter. Ak Bars, however, was not content to play its usual cautious game. The second period, in particular, saw the visitor dominate on offense, outshooting SKA 22-8 and getting a 2-1 lead through Vladimir Tkachyov in the 34th minute. The snapped a 1-1 tie from the first period when Evgeny Ketov put SKA up only for Yakob Rylov to cancel out the advantage almost immediately. Oscar Moller sealed the win for the visitor in the 59th minute with a power play to move Ak Bars to within a point of the top eight in the Eastern Conference. 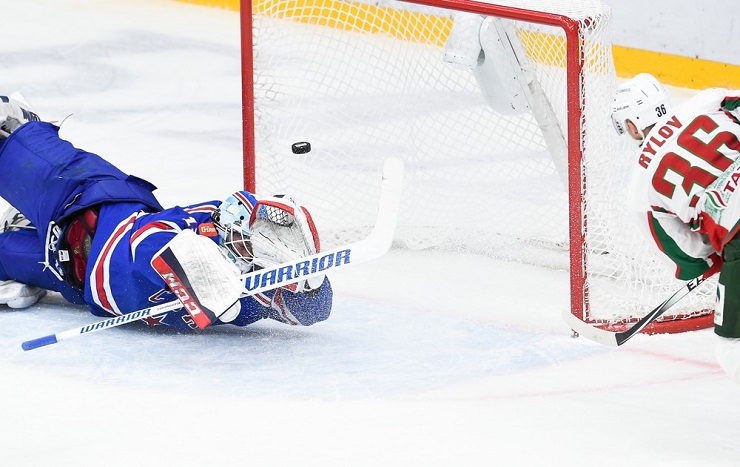 Salavat Yulaev’s offense is in fine form – and Friday’s win made it 16 goals in three road games for the team from Ufa.

Linus Omark led the way in Magnitogorsk with 2+2 in a game that the visitor seized control of early on before withstanding a powerful rally from the host in the closing stages.

Omark got things rolling with an assist on Andreas Engqvist’s third-minute opener and made it 2-0 himself in the 11th minute. In the middle session Teemu Hartikainen and Kirill Koltsov stretched the lead to 4-0 by the 30th minute, before Jan Kovar finally got Magnitka on the board on 32:18.

Nikolai Prokhorkin made it 5-1 for Salavat with another Omark assist as the home team struggled to clear its zone, but the Mozyakin-Kovar-Zaripov line combined once again for the Metallurg captain to make it 5-2 going into the final session.

And what a third period it was! Kovar and Mozyakin both grabbed their second goals of the night to make it a one-goal game with 14 minutes still to play. Chances came at both ends: Vasily Koshechkin pulled off a great save to deny Dmitry Makarov from close range, while Mozyakin had more than one opportunity to complete a hat-trick and tie the game. In the end, though, Omark’s empty-netter ensured the points went to Ufa. 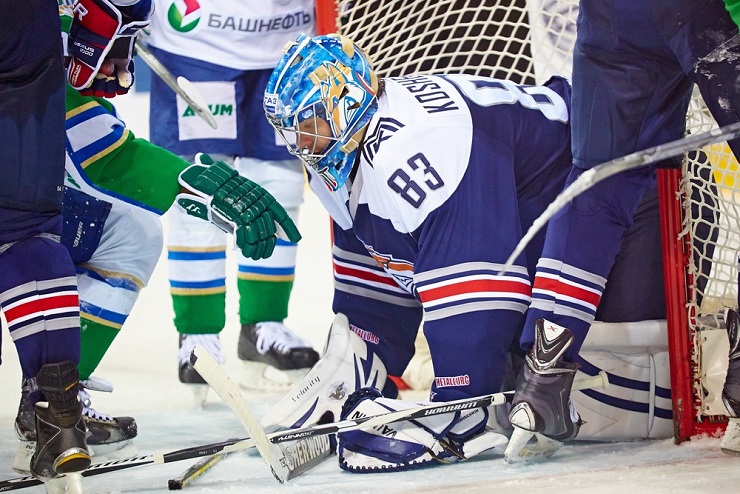 Yegor Averin was among the points for the eighth game in a row, scoring Lokomotiv’s second goal in a 4-2 win at home to Neftekhimik. Denis Mosalyov, Ilya Lyubushkin and Emil Galimov also found the net as Loko opened up a 4-0 lead; Alexander Kitarov and Mikhail Zhukov reduced the deficit later on. Loko goes four points clear at the top of the table after winning for the ninth game in a row.

HC Sochi blew a 2-0 lead at home to Traktor before losing out in a shoot-out. Martin Ruzicka got the game-winner after Andrei Kostitsyn was the only player to fail with his penalty shot. Earlier Nikolai Zherdev and Evgeny Skachkov scored in the second period to put Sochi in control, but Andrei Popov and Artyom Borodkin tied the scores before the second intermission.