Lokomotiv’s rock-solid defense helped it stretch its lead over CSKA to four points in the Western Conference.

Alexei Kudashov rotated his goalies for Wednesday’s game against Traktor, resting Alexei Murygin after two successive shut-outs and giving Vitaly Kolesnik a start. The switch was seamless: Kolesnik made 18 saves to extend the goalless run to three games.

At the other end Petri Kontiola enjoyed himself at his former team-mates’ expense. The Finn scored Loko’s second goal and assisted on the third, scored by Yegor Korshkov. Daniil Apalkov gave Loko the lead in the 36th minute.

Avangard edged a wild game at home to Admiral, with Vladimir Sobotka settling the shoot-out after a 5-5 tie in regulation.

But the host may well feel it should have been finished earlier: two goals in a minute, late in the third period, saw Stanislav Alshevsky and Konstantin Makarov pull Admiral level after trailing 3-5.

Two goals each from Sergei Shirokov and Denis Parshin, plus one from Sobotka, had given Avangard its lead, but Alexander Kuznetsov also scored twice and Oskars Bartulis completed Admiral’s scoring.

Moscow’s Luzhniki Arena has been home to some epic battles between SKA and Dynamo Moscow in recent seasons, but this was the first time Kovalchuk & Co had come here to play Spartak.

A different cast did not mean, however, the action was any less competitive: for 40 minutes there was little to choose between the two teams in the latest clash between Russia’s two capitals.

SKA opened the scoring in the 25th minute through Alexander Barabanov; Spartak tied it up in the 37th minute thanks to Charles Genoway.

Only in the third period did SKA take control, outshooting Spartak 11-4 and getting two goals from Dmitry Kalinin and Jarno Koskiranta. 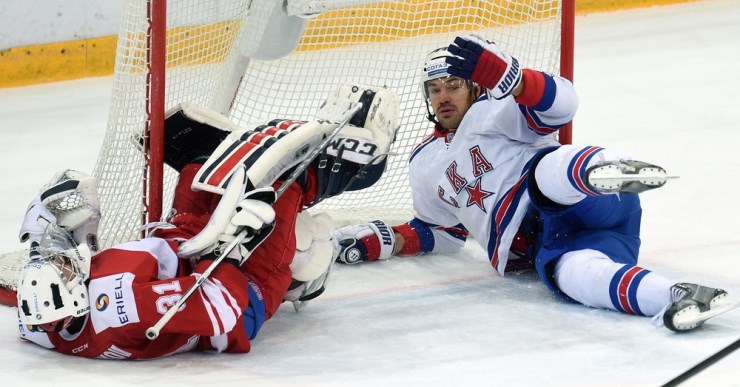 Jokerit bounced back from a heavy home defeat against Salavat Yulaev with a 4-2 win at home to Metallurg Magnitogorsk. The first period was scoreless but the Finns took control in the second thanks to answered strikes from Topi Jaаkola (2) and Jesper Jensen. Magnitкa rallied in the third as Vladislav Kaletnik and Sergei Mozyakin made it a one-goal game but Tommi Huhtala wrapped up the win in the 55th minute.

Salavat Yulaev hit five on the road for the second game in a row, recovering from 1-3 down to win 5-3 at Dinamo Riga. Andreas Engqvist scored twice, Igor Grigorenko and Sami Lepisto both posted 1+2 and Dmitry Makarov got the other goal. Kaspars Saulietis, Steven Seigo and Mikelis Redlihs were the Dinamo scorers.

Artyom Zub got the game-winner for Amur in a 3-2 success at Barys. He struck in the 53rd minute to give his team the lead for the third and final time. Oleg Li and Vyacheslav Ushenin also scored for the visitor; Nigel Dawes and Konstantin Pushkaryov replied for Barys.

It took a shoot-out to separate HC Sochi and Neftekhimik, with Andrei Kostitsyn finally giving the verdict to the home team. The decisive action came long after the goals in regulation: Ilya Krikunov put Sochi up in the sixth minute, but Pavel Zdunov tied it up in the 10th.