Seven up for Loko. October 12 round-up

Lokomotiv returned to the top of the Western Conference after posting its seventh win on the spin. Once again, star goalie Alexei Murygin was the man of the moment, posting his second successive shut-out after turning away 28 shots and showing every sign of embarking on another long unbeaten run between the piping.

As in the previous game at SKA, Andrei Loktionov opened the scoring in Moscow with a fourth-minute goal. Mikhail Pashnin doubled the lead deep into the second period as Loko eased to yet another win. 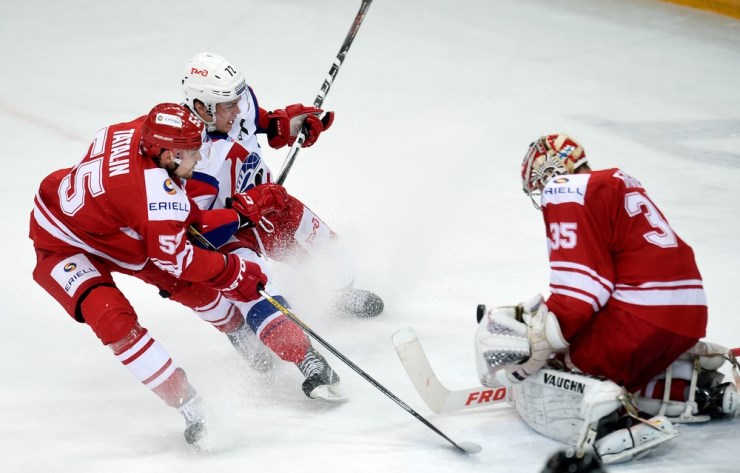 The high-flying Finns suffered a shock home defeat against Salavat Yulaev. If the visitor’s recent improved form under newly-appointed head coach Igor Zakharkin suggested this might be a closer game than the league table indicated there were few signs of the whirlwind that the Ufa team was about to unleash.

Thing started well enough for Jokerit: Ville Lajunen opened the scoring in the eighth minute as the second-placed team in the West looked to close the gap on CSKA.

But that advantage was short-lived as Sami Lepisto scored against his countrymen to tie the scores within a minute. The second period started badly for Jokerit as old boy Linus Omark helped Igor Grigorenko put Salavat in front. It got worse still when Anton Lazarev and Teemu Hartikainen extended that lead to 4-1 with two goals in little over a minute. Alexander Nesterov completed the rout as the men in green move to within one point of the play-off spots.

SKA shot down by Sochi

The game was marred by two bad checks that resulted in Maxim Chudinov and Denis Kazionov being ejected from the game in the second period.

SKA’s Chudinov was the first to go: he had just emerged from the box after serving a minor for high-sticking when he barrelled across the ice and slammed into Igor Ignatushkin, catching the Sochi forward late and high and leaving him sprawled over the ice.

Kazionov followed him to the locker room late in the second period after being called for boarding on Dmitry Yudin, a challenge that prompted a fracas between both sets of players.

Those incidents rather overshadowed a game that had been shaping up as an intriguing battle after the teams traded first-period goals. Jarno Koskiranto gave SKA the lead but Evgeny Skachkov tied it up in the 18th minute.

Avangard defeated Amur in a shoot-out, but a 1-1 tie in regulation ensured that Sibir remains on top of the Eastern Conference. Dmitry Tarasov gave Amur the lead before Yury Alexandrov tied it up. Artur Lauta got the game-winner as Juha Metsola’s 42 saves were in vain. 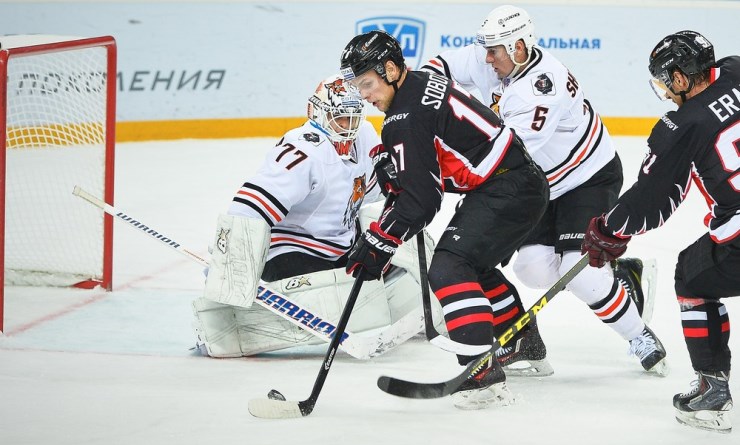 Nigel Dawes scored 3+1 to lead Barys to a 5-3 win over Admiral. He kicked off with an assist on Mike Lundin’s opener then scored twice in the second period to give his team a 3-2 lead. Oskars Bartulis tied it up in the third before Martin Saint-Pierre got the only Barys goal that didn’t involve Dawes. The American then completed his starring display with an empty-netter to complete his hat-trick.

Neftekhimik came from behind to win 3-1 at Traktor. Martin Ruzicka gave the host a second-period lead but Mikhail Zhukov tied it up soon afterwards. In the third period Evgeny Lapenkov and Yegor Milovzorov completed the victory for Neftekhimik. 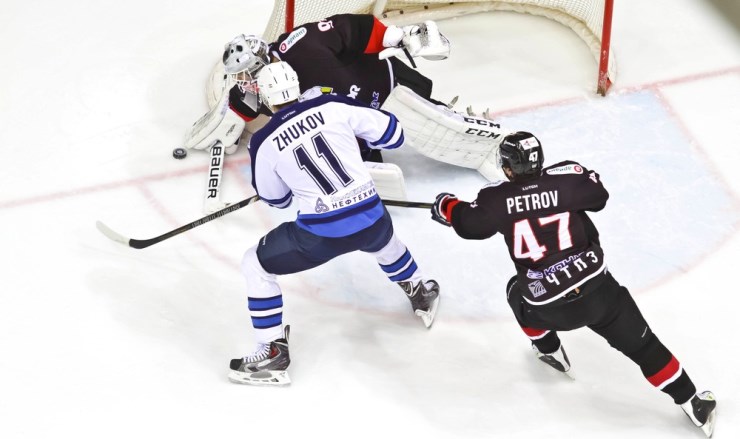