The visitor, which has quietly climbed to the top of the Western Conference thanks to this result, was once again indebted to star goalie Alexei Murygin. Fresh from setting a KHL record of 302:11 without conceding a goal, he collected yet another shut-out after turning away 31 shots from SKA’s star-studded offense.

Andrei Loktionov got his first goal of the season to put Loko in front in the sixth minute and Petri Kontiola doubled that lead in the first period. Yegor Averin capitalized on a 5-on-3 power play in the second period to make it 3-0 and there was no way back for SKA.

Lokomotiv now have six wins on the spin and hold a one-point advantage over CSKA in the Western Conference.

Metallurg Novokuznetsk continued to hold its hoodoo over Avangard with a 4-1 victory in Omsk. Last season the underdog won four out of five meetings between these teams, and this season a comfortable success snapped Kuznya’s five-game losing streak in some style.

The damage was done in the first period when Metallurg scored three unanswered goals. Vadim Mitryakov opened the scoring after just 81 seconds and Kirill Kaprizov and Ilya Musin extended that lead with two goals in less than a minute as the first intermission approached.

Ilya Zubov got Avangard on the scoreboard in the 27th minute but Ryan Stoa’s eighth of the season in the 38th minute ensured there was no way back for the home team.

Avangard’s defeat cost the team top spot in the Eastern Conference with Sibir and Ugra climbing into the top two spots.

Sibir back on top in the East

Sibir regained the summit of the Eastern Conference thanks to a wild 6-3 win over Barys. The Siberians saw a 2-0 lead wiped out before rallying to take the points and overtake Avangard at the top of the table.

The opening was spectacular with the teams trading four goals in nine minutes. David Ullstrom and Stepan Sannikov put Sibir in front but Vadim Krasnoslobodtsev and Brandon Bochenski tied the game almost immediately. Martin St.-Pierre gave Barys the lead at the first interval – but that was as good as it got for the host.

Sibir turned the game upside down with two goals in 14 seconds midway through the second period. Alexei Kopeikin and Sergei Shumakov scored on Jan Laco to make it 4-3, and the third period saw Ullstrom get his second of the night before Oleg Gubin wrapped it up with an empty-netter.

Second-period goals from Anatoly Golyshev and Artyom Garayev lifted Avtomobilist to a 2-0 win at home to Amur. Jakub Kovar made 23 saves for his shut-out. 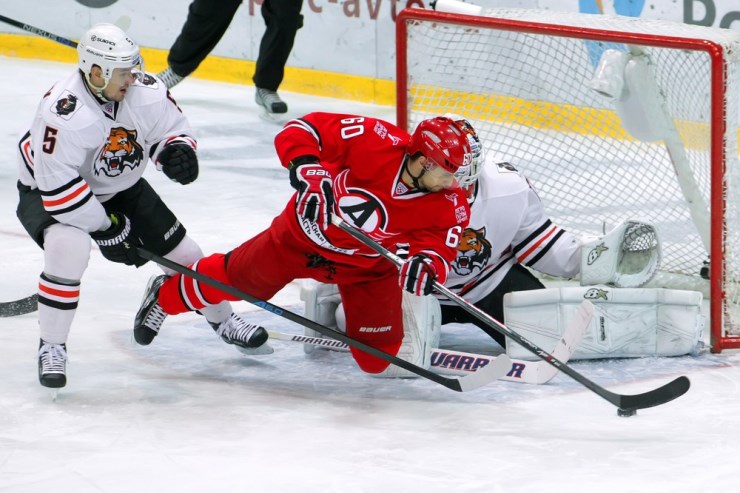 Ugra’s impressive form continues with a 3-0 win over Admiral in Khanty-Mansiysk. Kirill Rasskazov scored twice in the second period to put Ugra in control before Stanislav Kalashnikov’s last-minute goal on the power play completed the scoring. Vladislav Fokin made 38 saves as Ugra go to second in the Eastern Conference.

Spartak followed up Wednesday’s 6-2 win in Sochi with a tighter triumph over the same opponent in Moscow. Sochi paid the penalty for a lack of discipline, giving up two power play goals in the first period to Charles Genoway and Igor Levitsky before recovering in the second period with a shorthanded goal from Ilya Krikunov and a power play marker from Andrei Kostitsyn. Filipp Toluzakov made it 3-2 for Spartak with yet another power play goal before Ben Maxwell tied it up on a penalty shot. Finally the game’s first goal from equal strength play saw Alexander Vasilyev give the host a 4-3 win.