Six of Friday’s seven game went the way of the visitor, with only Traktor Chelyabinsk claiming a win in front of its own fans. Even there, though, Dinamo Riga took a point from a 2-2 tie before losing in a shoot-out on a great day for travelers in the KHL

Three of the league’s powerhouses went down to surprising defeats against relatively modest opposition. Magnitka started the slump, losing out to a Slovan team struggling at the foot of the Western Conference.

Andrei Stastny and Ladislav Nagy shocked the home team with two quick first-period goals and Patrik Lusnak made it 3-0 in the second before Vladislav Kaletnik and Oskar Osala lead a fight back that fell narrowly short.

In Kazan, Ak Bars’ slow start to the season continued. Last season’s beaten Gagarin Cup finalist still can’t force its way into the top eight, and a dreadful 30 minutes at home to Vityaz compounded the problems. Goals from Maxim Afinogenov, Roman Horak (2) and Mario Kempe put the visitor 4-0 ahead before Mikhail Varnakov and Stepan Zakharchuk reduced the deficit.

CSKA was also sunk by a swift salvo: Torpedo fired twice in 18 seconds to take a 2-0 lead in the 15th minute. Artyom Alyayev and Nikita Dvurechensky put the visitor in charge as Torpedo dominated the opening stages. The Army Men suffered further when Grigory Panin got a 5+20 for kneeing but the action gradually switched to the other end of the ice. Ilya Proskuryakov, a former CSKA goalie, was in fine form to keep the home team at bay with 30 saves before he was finally beaten by Bogdan Kiselevich. By that time Kaspars Daugavins had already added Torpedo’s third during a passage of 4-on-4 play and an empty-netter from Vladimir Galuzin completed the scoring. 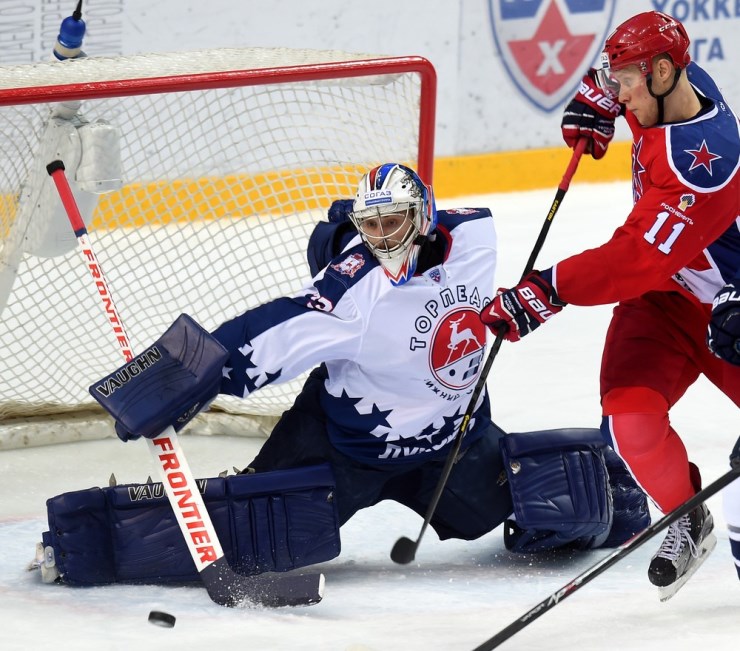 The Blue-and-Whites’ forwards, under some criticism going into the game, responded with three of the goals. Maxim Pestushko scored two of them, including the opener after just 34 seconds, with Alexei Tereshchenko also finding the net off assists from the still goalless Nikita Filatov and Daniil Tarasov.

There were also goals from Denis Barantsev, a defenseman who spent last season with Lada, and Mat Robinson, Dynamo’s leading scorer this season.

Once again, though, Lada’s offense failed to fire: goaltender Alexander Lazushin made just 14 saves for his shut-out. 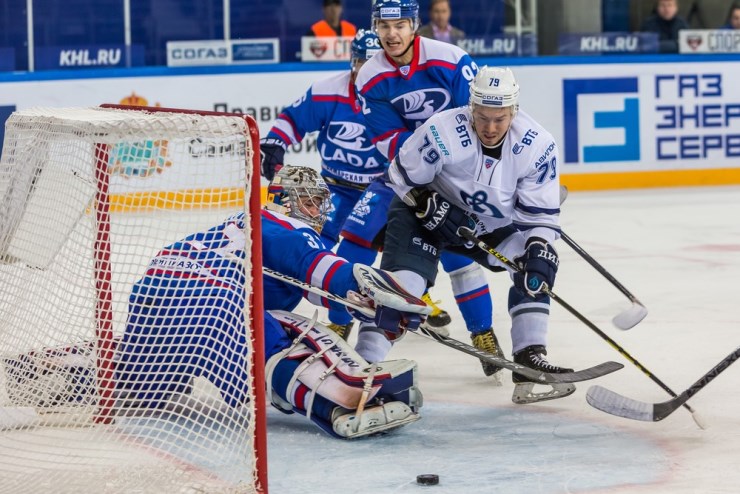 Last weekend Medvescak’s own winning run was abruptly halted when Zakharkin’s team won in Croatia, but the men from Zagreb did not waste much time in getting revenge for that loss. The game was pretty much settled inside 10 minutes as the visitor raced into a 3-0 lead with goals from Patrick Bjorkstrand, Radek Smolenak and Colby Genoway.

The home side rallied in the middle session, with Sergei Soin and Denis Khlystov pulling it back to 3-2, but Geoffrey Kinrade restored a two-goal cushion for Medvescak. Stefano Giliati completed the scoring in the third.

Traktor got the day’s only home win, but needed a shoot-out to get past Dinamo Riga. Maxim Yakutsenya got the winner; Danil Gubarov and Dmitry Pestunov scored in regulation for the host. Miks Indrasis and Mikelis Redlihs were Dinamo’s scorers.

Jokerit won 3-0 at Neftekhimik. Jesse Joenssu opened the scoring in the first period; Pekka Jurmaka and Tommi Huhtala wrapped it up in the third. Henrik Karlsson made 24 saves for his shut-out.