Ilya Nikulin is one of Kazan hockey’s favorite sons – but there was little joy for him as he returned to the Tatneft Arena in the colors of Dynamo Moscow.

The defenseman, who left Ak Bars in the summer after many trophy-laden seasons of distinguished service, made his first return since turning down an extended contract. However, the game went against him and his team as the host won 3-2.

Mikhail Varnakov was the key player, scoring the first two goals. He broke the deadlock in the first period with a one-timer off Albert Yarullin’s pass from behind the goal. Then in the second period he scored off his own rebound to double the lead.

Dynamo finally got on the scoresheet in the third with two defensemen hitting the net. First Dmitry Vishnevsky struck from the blue line and Juuso Hietanen also beat Emil Garipov from long range. But in between Yarullin scored a third goal for Ak Bars and when Nikulin’s late slap shot thundered narrowly wide that was the end of Dynamo’s chances. 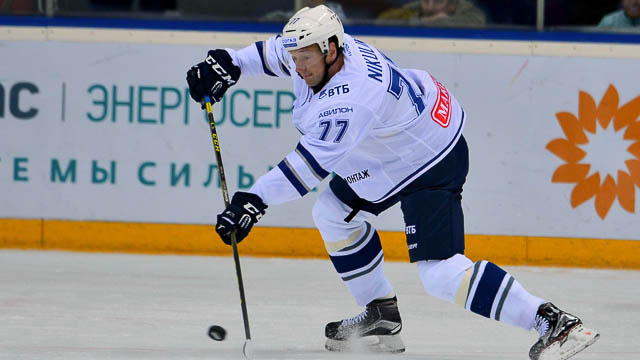 The ever-reliable Sergei Mozyakin was the difference-maker once again as Metallurg Magnitogorsk battled back to beat Medvescak in overtime.

Mozyakin, the KHL’s all-time top scorer, got the game winner 31 seconds into the extras. Chris Lee feinted a shot and swung the puck across the ice to the waiting forward, whose shot from the face-off spot beat Gasper Kroselj at the near post.

Defeat was rough on Medvescak who led twice in regulation. Patrick Bjorkstrand opened the scoring in the 31st minute only for Mozyakin to tie it up early in the third. The visitor hit back once again, Bjorkstrand turning provider for Gilbert Brule before Oskar Osala made it 2-2 with seven minutes to play.

Dmitry Pestunov was the architect as Traktor downed Jokerit. The forward had two goals and an assist as the host raced into a 4-0 lead before withstanding a revival from the Finns.

Semyon Kokuyov’s short-handed goal put Traktor up in the first period and Pestunov took control after the intermission. He made it 2-0 with a shot from distance before claiming an assist on Anton Glinkin’s power play goal. Then he took advantage of a kind deflection from Andrei Popov’s shot to make it 4-0 in the 26th minute, chasing Henrik Karlsson from the Jokerit net.

Peter Regin pulled one back for the visitor but Popov made it 5-1 late in the second. Jokerit managed two unanswered goals in the final session through Juhamatti Aaltonen and Tommi Huhtala but could not salvage the game.

The new-look Salavat Yulaev continued its winning form on home ice, but after a lightning-fast start the team was left hanging on for a 3-2 win. Igor Grigorenko, Maxim Goncharov and Sami Lepisto scored three in two minutes before Marek Viedensky pulled one back in the first period and Milan Bartovic made it a one-goal game in the 25th minute. 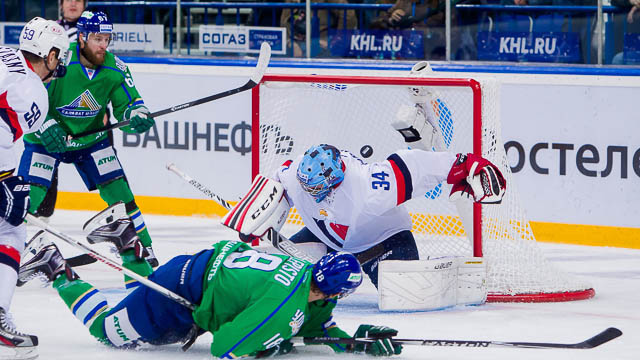 A third-period goal rush lifted Spartak to a 6-2 win at HC Sochi. The teams were deadlocked at 2-2 after 40 minutes, before Roman Tatalin, Konstantin Glazachev, Lukas Radil’s second of the night and finally Gleb Klimenko fired the Red-and-Whites to a comfortable win.

Two goals from Mikhail Zhukov helped Neftekhimik to a 3-1 win at home to Dinamo Riga. Pavel Zdunov also found the net for the host, while Nikolajs Jelisejevs got Dinamo’s goal.

Bottom club Lada earned a narrow 1-0 win at home to Vityaz thanks to Dmitry Vorobyov’s goal on the half-hour. Once again, though, Lada struggled to take its chances with visiting goalie Harri Sateri making 30 saves. Home stopper Edgars Maskalskis had 17 saves for his shut-out as Lada ended a 10-game losing run. 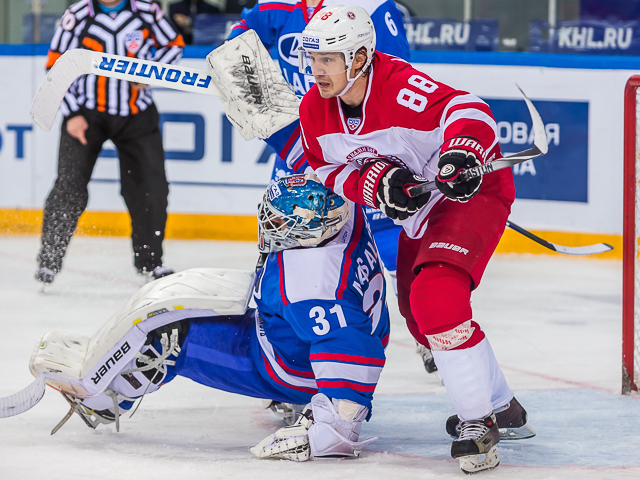