Amur may have signed up much of Admiral’s playing staff from last season, but the Vladivostok team still has the edge in the Far East derby.

The teams’ first meeting ended in a 4-2 win for the Sailors, and today’s clash finished with Amur sinking to a 2-0 loss.

Konstantin Makarov made the difference between the teams, scoring both of Admiral’s goals. The first came on the power play in the 13th minute and the second was into an empty net with barely a minute left on the clock.

At the other end Ivan Nalimov made 28 saves to record his third shut-out in a row: if he can continue that form he might start challenging Alexei Murygin’s current record-breaking shut-out sequence for Lokomotiv.

The latest instalment of the duel between Jokerit and CSKA went the way of the Moscow team. The Army Men claimed the first away win from the three games between the teams so far this season thanks to a pair of goals in the third period.

CSKA made the perfect start, taking the lead in the second minute through Evgeny Korotkov off a Grigory Panin pass. But subsequently things were hard work for the league leader: the power play failed to fire properly and Jokerit more than held its own on the shot count.

That misfiring CSKA pp proved even more costly in the second period as the home team equalized with a short-handed goal from Petteri Virtanen. That got a big crowd firmly behind the Finns and set up a final session that could go either way.

At last the visitor’s special teams got into gear, creating sustained pressure on an advantage that spanned both sides of the intermission and getting the reward with a goal seconds after Jokerit returned to full strength. Geoff Platt scored that one, allowing CSKA to keep the game tight and rely on Ilya Sorokin to deal with any Jokerit opportunities. With few further chances at either end the scoring was settled in the last minute by Simon Hjalmarsson’s empty net goal.

Igor Zakharkin seems to have found a winning formula for Salavat Yulaev. After an overtime success at Slovan in his first game as head coach he took the team to in-form Medvescak and promptly snapped the Croatians’ six-game winning streak.

Two quick goals midway through the third period settled the outcome: Teemu Hartikainen and Dmitry Makarov gave the visitor a winning 3-1 advantage before Milan Jurcina’s second of the night cut the deficit.

Earlier Medvescak had edged the first period thanks to a power play goal from Jurcina before Ivan Vishnevsky tied it up on a power play midway through the second. 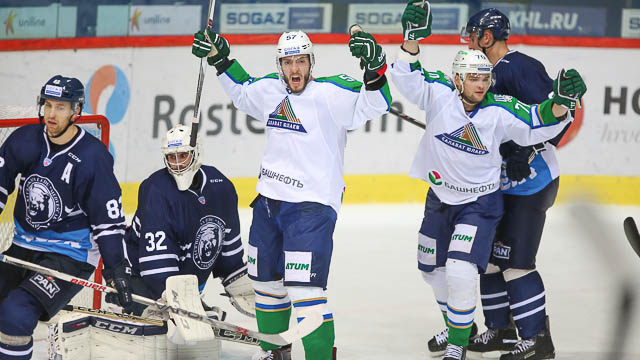 A late flourish saw Metallurg Magnitogorsk claim a 5-2 win at Slovan. The game was tied going into the last five minutes before Tomas Filippi put the visitor ahead. Oscar Osala and Evgeny Timkin piled on the punishment in the dying seconds, neutralizing Slovan’s fight back at the start of the third when Milan Bartovic and Rok Ticar clawed back an 0-2 deficit.

Nikita Gusev was the key man in Ugra’s shoot-out win over Metallurg Novokuznetsk. The forward scored his team’s first goal, then had an assist when Igor Bortnikov cancelled out Ryan Stoa’s goal to tie the game at 2-2. Finally he got the game-winner to maintain Ugra’s promising push up the Eastern Conference.

Sibir came from 2-0 down to win in a shoot-out at Avtomobilist. Maxim Shalunov settled the extras after Tomas Vincour and Viktor Bobrov hauled the team level. Anatoly Golyshev scored twice in the first period for Avto but still ended up on the losing side.