Jokerit twice came from behind to snatch a narrow victory at home to SKA thanks to Jani Rita’s third-period goal and a fine late save from Henrik Karlsson.

Rita scored off his own rebound in the 43rd minute to put the Finns in front for the first time in the game, and that lead lasted until the siren despite some intense SKA pressure that saw Karlsson pull off a final game-saving stop in the final minute.

Earlier, though, SKA twice had the lead – and could have punished Jokerit further on a 5-on-3 power play with the scores at 2-1. Alexander Dergachyov gave the visitor the edge in the first period before Niko Kapanen and Alexander Barabanov traded goals midway through the second. Then came that double penalty kill for Jokerit before Brandon Kozun made it 2-2 in the 39th minute. 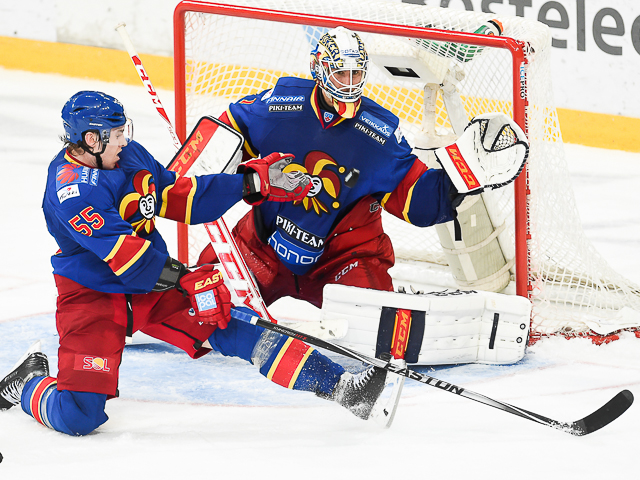 The experienced Czech star struck in the 51st minute to snap a 3-3 tie and send his team back to the Eastern Conference summit.

Earlier the game got off to an explosive start with five first-period goals. The home team took the initiative at the start with goals from Pavel Buchnevich and Andrei Shefer in the first 10 minutes, but Avangard rallied strongly.

Vladimir Sobotka and Yury Alexandrov tied the scores before Denis Kulyash made it 3-2 in the 16th minute to complete a rapid turnaround.

Pavel Chernov tied it up for Severstal late in the second period, but Erat’s goal extinguished home hopes despite a desperate 6-on-3 surge in the dying seconds of the game.

Alexander Radulov showed his value to CSKA once again with a game-winning goal in overtime against Barys.

Although the two teams enjoyed very different starts to the season there was little to choose between them on the ice, with the Kazakh visitor full value for a 3-3 tie in regulation. But CSKA had a man advantage going into overtime and the Army Men’s power play did the necessary: Radulov had time on the face-off spot to pick his spot while Geoff Platt screened goalie Jan Laco.

Barys had led twice earlier in the game, with Nigel Dawes opening the scoring and Mike Landin making it 2-1 before Nikita Zaitsev and Jan Mursak gave the home team the lead. Dawes struck again to tie it up in the third. 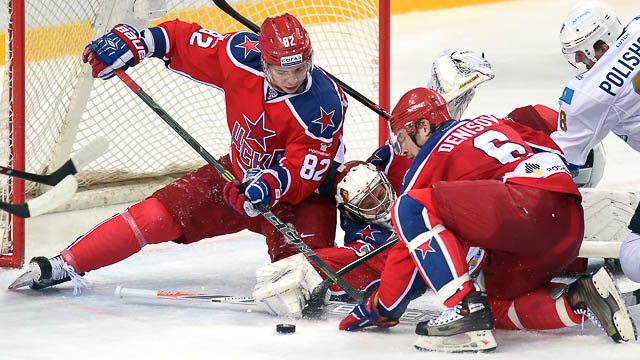 Ugra won 2-1 in overtime at home to Dinamo Minsk, climbing to second in the Eastern Conference. Igor Bortnikov got the crucial goal after Ivan Yatsenko and Matt Ellison traded scores in regulation.

A power play goal in the 56th minute saw Dmitry Megalinsky give Avtomobilist a 3-2 win at home to Torpedo. The home team recovered from a 1-2 deficit at the midway point: Andrei Alexeyev cancelled out Linus Videll’s goal to start the fightback.

For the second game running, Ivan Nalimov posted a shut-out for Admiral in a 1-0 victory. This time Ak Bars was the victim as the goalie made 24 saves. Stanislav Alshevsky got the only goal in the 11th minute.

There was a dramatic late winner for Amur at home to Lada, with Evgeny Grachyov snapping a 2-2 tie with just 47 seconds left to play. Lada had dominated the first period but only had a Tobias Viklund goal to show for their efforts before the home team hit back through Nikita Cherepanov and Dmitry Tarasov early in the second. Vasily Streltsov brought the game back to 2-2.

Lauris Darzins was the key player for Dinamo Riga as they Latvians made it two wins out of two with a shoot-out success over Spartak. Darzins tied the game in the third period and then got the winner in that shoot-out. Igor Radulov, Matt Gilroy and Evgeny Bodrov were Spartak’s scorers; Miks Indrasis and Guntis Galvins also found the net for Dinamo.