CSKA on top in battle of the leaders. September 29 round-up

CSKA won the battle of the conference leaders thanks to solid goal-tending from Ilya Sorokin and two goals from Geoff Platt and Ivan Telegin.

There was little to choose between the teams for much of this game, with both defenses working hard to limit opportunities for their opponents. But Platt opened the scoring on the power play midway through the second period and Telegin wrapped it up with eight minutes to play.

Avangard welcomed back Vladimir Sobotka after injury and handed a debut to former NHL man Martin Erat, but neither of them could find a way past Sorokin, a young goalie who also enjoyed two victories over Avangard last season with Metallurg Novokuznetsk. 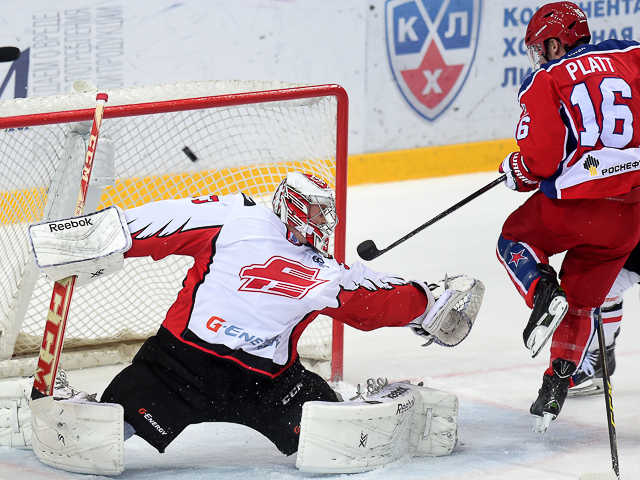 SKA stumbles at home to Dinamo

If SKA head coach Andrei Nazarov was hoping for a winning streak to calm down questions about his tenure in the Northern Capital, this game was precisely the reverse of what he’d have anticipated.

Dinamo came to Petersburg on five-game losing run and seemed to be there for the taking against an opponent that had shown better form in beating Jokerit at the weekend. But SKA remains unpredictable this season and Tuesday’s game saw everything go wrong.

The first period saw SKA have the bulk of the play, but fail to beat Joacim Eriksson in the Dinamo goal. To make matters worse, the Latvians’ counter-attack was on song and Miks Indrasis twice punished the host on the breakaway.

Lauris Darzins extended that lead before Maxim Chudinov got SKA on the scoreboard late in the second, but there was to be no stirring fight back here. The Army Men failed to seize the initiative in the final session and Gunars Skvorcovs completed the scoring with an empty-net goal.

Loko gave record-breaking goalie Alexei Murygin a breather for this game, leaving him still within 40 minutes of turning his KHL all-time shut-out sequence into a Russian championship record.

But the return of Vitaly Kolesnik between the piping made little difference to the teams winning form as it powered to a comfortable win. Yegor Korshkov gave Loko the lead in the third minute and although Kuznya tied it through Mikhail Kuklev in the 11th, there was rarely any serious danger of a surprise here.

Yegor Averin scored twice in quick succession early in the third to put Loko in complete command and Emil Galimov made it four in the 40th minute to wrap up a convincing victory.

David Ullstrom was Sibir’s game-winner for the second time running as the Siberians won in a shoot-out again. This time Ullstrom snapped a 2-2 tie at home to HC Sochi. Sergei Shumakov and Calle Ridderwall scored for Sibir; Max Warn and Andre Petersson replied for Sochi. 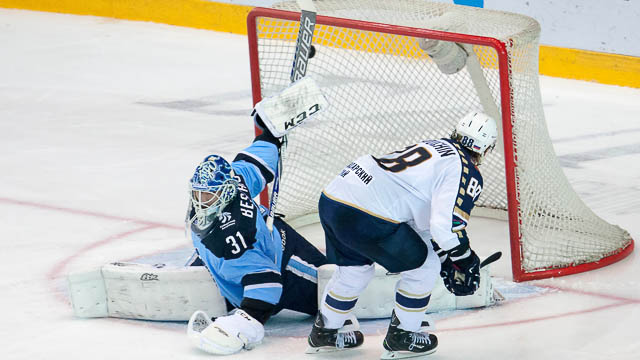 Ugra edged Torpedo 3-2 thanks to a game-winning goal from Vitaly Sitnikov in the 57th minute. The game was also notable for a goal from Kaspars Daugavins on his Torpedo debut after the Latvian forward moved from Dynamo Moscow.

Goalies were on top in Khabarovsk where Amur and Ak Bars played out 65 goalless minutes. Finnish duo Juha Metsola and Jussi Rynnas made 45 saves between them before Vyacheslav Litovchenko gave the host victory in the shoot-out.

Dinamo Minsk had a second big win over Avtomobilist in quick succession, winning 4-1 in Yekaterinburg. This time, though, the scoreline was inflated by two empty-net goals from Matt Ellison and Ilya Shinkevich after a rather tighter affair. The teams traded goals in the first nine minutes before Nik Bailen put Dinamo ahead once more early in the third. 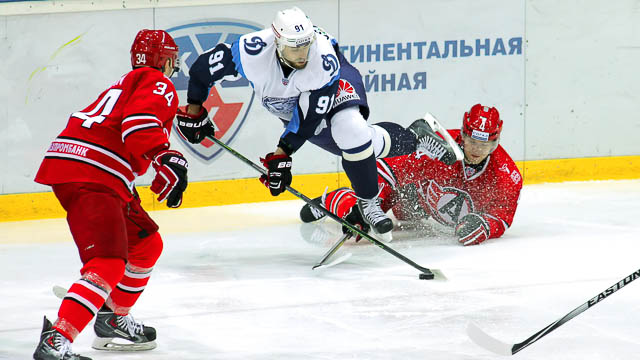 Konstantin Makarov got the only goal as Admiral won at home to Lada. Visiting goalie Edgars Maskalskis had 39 saves, but Ivan Nalimov got the win with a 15-save shut-out.