Traktor’s mis-firing offense hit its stride at last to power to victory at Vityaz. After Roman Horak put the home team up after six minutes, Traktor got its game in gear. Alexei Petrov tied the scores off Alexander Rybakov’s assist before Rybakov himself scored the go-ahead goal early in the second period.

Artyom Borodkin stretched that lead before the second intermission and Maxim Yakutsenya completed the scoring midway through the third period.

Ilya Nikulin got his first goal on his return to Dynamo Moscow as the veteran defensemen set the seal on a 3-0 victory for his team at home to Neftekhimik.

Nikulin, who left Ak Bars in the summer in search of a move to North America, agreed to join the Blue-and-Whites last week after failing to secure the deal he was looking for across the ocean – and the NHL’s loss looks sets to be Dynamo’s gain. The much-titled blue-liner began his career in Moscow before heading to Kazan and his return is already a welcome reinforcement for a team that has staked more on youth than experience thus far this season. 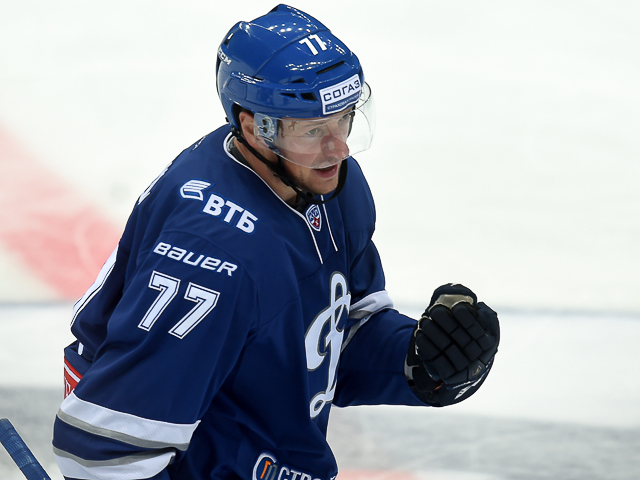 The home team was already in control of the game when he opened his account on his return: his powerful strike in the 51st minute extended the lead to 3-0 against a Neftekhimik team coached by Vladimir Krikunov – Nikulin’s first coach at Dynamo and the man who first called him into the Russian national team at the 2006 World Championship in Riga.

Aside from Nikulin, Dynamo delivered a solid performance from start to finish. Ansel Galimov opened the scoring in the 18th minute and Alexander Avtsin doubled the lead in the middle session. Goalie Alexander Lazushin had 21 saves for his shut-out.