Anton Burdasov and Evgeny Dadonov scored two goals and two assists each to lead SKA to an emphatic win over league leader Jokerit.

The game was effectively decided in the 40th minute, as SKA scored twice in quick succession to open up a 5-2 lead. Prior to that things had been tight: a scoreless first period was followed by an explosion of goals in the second, but Jokerit – helped by some slack defense – was able to stay on the home team’s trail.

Yegor Yakovlev opened the scoring in the 21st minute, but Mathis Olimb cancelled that out shortly after. Burdasov and Pekka Jormakka repeated that sequence before the former made it 3-2 on 31:50. But Jokerit’s hopes were hammered when Ilya Kablukov made it 4-2 on 39:09 and Dadonov put the game almost out of reach with the last play of the session.

Brandon Kozun got one back in the third to raise hopes of a revival but Dadonov’s second, on the power play, killed off any prospects of an away win. 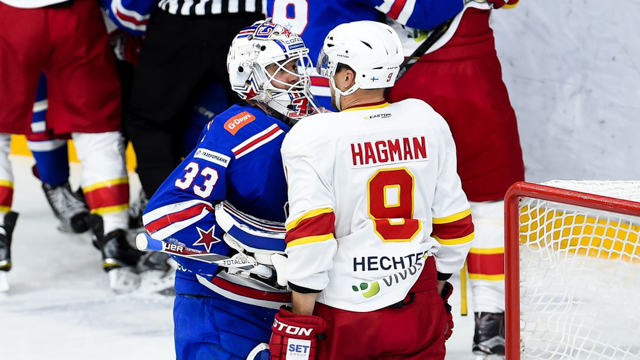 Former Ak Bars forward Tomas Vincour came back to haunt his old club with two goals to help Sibir come from behind to win in overtime.

The big clash of the day in the Eastern Conference was an incident-packed affair, but for long periods it seemed that Ak Bars would go away with all three points. The visitor made a perfect start when Justin Azevedo scored after 28 seconds and doubled the lead in the 13th minute through Igor Mirnov.

Sibir got back in contention in the middle session with goals from Damir Zhafyarov and Vincour sandwiching Artyom Lukoyanov’s marker for the visitor, but when Mirnov’s second made it 4-2 early in the third, home hopes were slim.

The host was not giving up, though. Oleg Gubin reduced the deficit before Vincour’s power play goal tied the game with 10 minutes to play. Neither team could find a breakthrough in regulation, but Maxim Ignatovich put Sibir ahead for the first time in the 64th minute to snatch victory.

Barys snapped a four-game losing streak with victory in Omsk, just three days after losing 4-1 at home to Avangard.

The Kazakh team had to come from behind when the home team scored on either side of the first intermission. Denis Kulyash and Alexander Perezhogin wiped out Evgeny Rymarev’s 10th-minute opener.

But Barys rallied with a quickfire salvo of its own. Nigel Dawes tied the game on 25:48 befor Brandon Bochenski made it 3-2 on 26:11.

Avangard could not find a way to beat Alexei Ivanov again and Dawes got his second of the night into an empty net to wrap up the win.

Torpedo was the day’s biggest winner, handing out a 6-0 thrashing to Ugra. The result was settled by four first-period goals, with Alexei Potapov, Alexei Sopin, Vyacheslav Kulyomin and Vladimir Galuzin all finding the net. Alexander Frolov and Alexei Pepelyayev completed the scoring.

Dinamo Minsk was another big winner, downing Avtomobilist 5-1. Jonathan Cheechoo opened the scoring in the first, but the real action came in the second. Paul Szczechura scored 2+1 and Sergei Drozd and Andrei Mikhalyov were also on target for Dinamo. Dmitry Megalinsky got Avto’s consolation.

Medvescak avenged its recent 7-1 defeat against Spartak with a 2-1 win in Moscow. Mike Glumac opened the scoring in the first period before Vyacheslav Leshchenko tied it up on the power play. But Medvescak soon got back ahead thanks to Jesse Saarinen’s goal in the 26th minute. 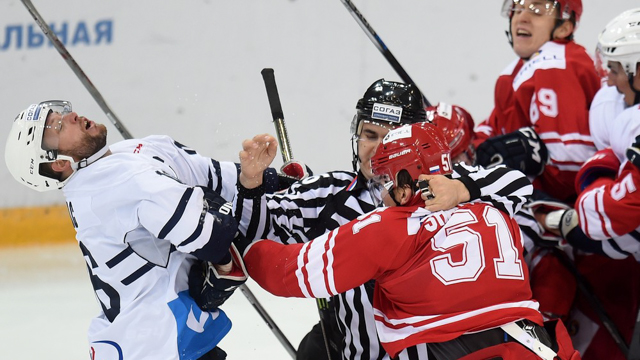 Goalies were on top in the Far East. Lokomotiv’s Alexei Murygin made 21 saves at Amur where Daniil Apalkov’s third-period goal proved decisive. In Vladivostok, HK Sochi won 2-0 thanks to two goals from Igor Ignatushkin and 29 saves from Konstantin Barulin. 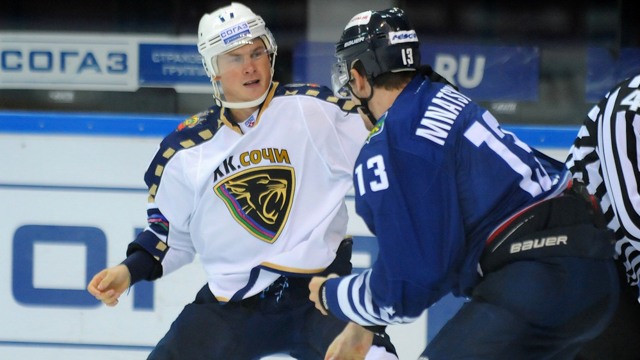 Metallurg Novokuznetsk’s goalie Andrei Kareyev made 21 saves to deny Lada. Alexander Komaristy and Kirill Kaprizov got the goals, Maxim Kazakov had two assists in a 2-0 win.

It took a shoot-out to separate Dinamo Riga and Slovan in Latvia. Tomas Starosta put the visitor ahead early on but Miks Indrasis tied it up midway through the second. The game finished 1-1 before Lukas Kaspar settled the outcome in Slovan’s favor.