Ilya Kovalchuk, back in SKA’s team after injury, produced a trademark goal to help his team win the Army Derby at CSKA.

Kovi’s strike came midway through the game to double the lead – and it was a special effort. He collected a pass from Joakim Lindstrom out on the blue line and embarked on a trademark surge to the net. Slaloming through the defense, he came face to face with Viktor Fasth before going top shelf to beat the Swedish international.

Earlier Anton Burdasov gave SKA the lead in the 19th minute after an opening period that was short on chances at either end.

But CSKA hit back early in the third through its own talisman, Alexander Radulov. He smashed home a one-timer off Gennady Stolyarov’s pass from behind the net after Bogdan Kiselevich launched a dump and chase to stretch the SKA defense. 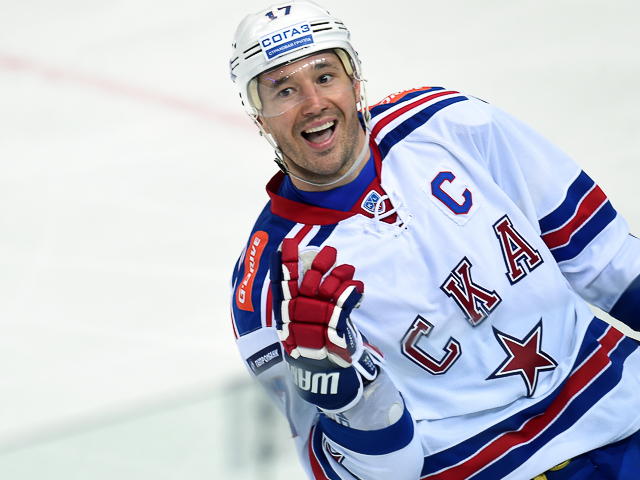 Jokerit climbs back on top

Jokerit returned to the top of the Western Conference after inflicting a first away defeat of the season on Slovan.

The Finns made a lively start and took the lead through Ville Lajunen in the ninth minute. Matias Olimb doubled that advantage five minutes later, capitalizing on a wayward pass to score. The second period was a battle of attrition, with neither side creating clear chances, but Slovan hauled itself back into contention with 10 minutes left thanks to a power play goal from Lukas Kaspar.

That drew a swift response from the home team, with plenty of possession around Barry Brust’s net, even if there were few shots on goal until Niko Kapanen deflected home a Topi Jakola effort in the 57th minute. Jesper Jensen completed the scoring late on.

Alexander Salak was the star of the show as goalies dominated the game between Sibir and Lokomotiv. The home stopper pulled off 36 saves to backstop his team to victory in a hard-fought clash in Novosibirsk.

Former Sibir favorite Patrick Hersley tested his ex-teammate more than most, firing in six shots on Salak’s net without finding a way past the Czech.

At the other end, Vitaly Kolesnik was left cursing his luck over Sibir’s winner. The visiting goalie did well to get a big stick on Oleg Gubin’s dangerous pass across the front of his net, only to get caught behind traffic as Vladimir Roth smashed the puck in from the blue line deep into the second period.

That was enough to settle the outcome as Salak held firm until the end. 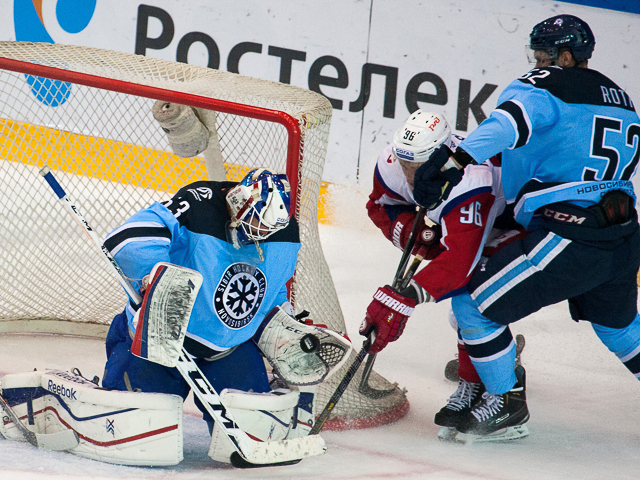 A short-handed goal from Vitaly Popov with just under three minutes to play completed a comeback win for Avtomobilist at Torpedo. The home team led 2-0 thanks to goals from Carl Klingberg and Alexei Pepelyayev, but Petr Koukal reduced the arrears late in the middle session before Dmitry Megalinksy tied it up on the power play in the 55th minute. Alexander Pankov made it 4-2 with an empty-netter.

HC Sochi got only its second away win of the season after a shoot-out success at Metallurg Novokuznetsk. Andre Petersson settled the outcome after Kuznya battled back from 1-3 down to tie the game. Ryan Stoa scored twice for the home team, while Nikolai Zherdev got his first goal since Sochi’s opening game of the season.

Vladislav Fokin made 36 saves to help Ugra to a 3-0 win at Dinamo Minsk. Goals from Pavel Medvedev and Nikita Gusev in the second period and Igor Bortnikov’s third-period strike settled the outcome.

Two goals early in the second period saw Medvescak come from behind to win at Dinamo Riga. Tim Sestito put the Latvians ahead midway through the first, but Jesse Saarinen and Marek Kvapil turned it around with goals in the 23rd and 25th minutes.